It started out as a mission to find shipwrecks, but once it was confirmed last week that the still unidentified vessel found in Queen Maud Gulf was indeed one of Sir John Franklin’s lost ships, the 2014 Victoria Strait Expedition turned into a dive mission.

Now, having spent the last few days planning and preparing, members of Parks Canada’s underwater archeology team are poised to descend on the wreck, which rests in about 11 metres of water at an undisclosed location in the gulf.

The only thing that’s stopping them — for now — is the weather. Dive operations can take place in rougher waters than a shipwreck search can, but in recent days, winds out of the north have occasionally approached 50 knots — double the maximum speed at which it’s still considered safe for Parks Canada divers to work.

Today, winds aren’t as strong, but a two-metre swell will prevent divers from getting in the water. The rest of the week looks more promising, however, with winds Tuesday through Friday forecast to be falling within what’s considered a safe range.

The wreck is so near the surface that even first-time divers could descend to it, if properly outfitted for Arctic conditions, but access to the site is being strictly limited. Only the five members of Parks Canada’s underwater archeology team will be allowed to dive at the wreck site, and ships participating in the search have been granted special permission not to disclose to their exact location to the Marine Communications and Traffic Services Centre in Iqaluit, which typically receives daily updates from all ships traveling in Canada’s Arctic waters.

Parks Canada says it will not release any photography or video from the wreck site until all dives for the year have been completed and they have returned to Ottawa to review the footage, a limited amount of which is expected to be made public, perhaps as early as October. 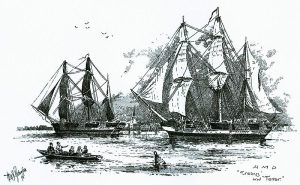