Cracking down on carp

The threat this fish poses to the Great Lakes
By Kathleen Clark
Advertisement
Map showing all known locations of grass carp. The one green dot is where they reproduce in the Great Lakes watershed. (Map: U.S. Geological Survey, Nonindigenous Aquatic Species Database)

Last October, a species of Asian carp called grass carp quietly did something in Ohio’s Sandusky River that scientists did not think possible: they spawned. Researchers from the United States Geological Survey had thought the river, a tributary of Lake Erie, was ill suited to the invasive fish’s reproductive needs.

The news didn’t escape notice north of the border. At Canada’s new Asian Carp Laboratory in Burlington, Ont., Becky Cudmore, manager for the Asian Carp Program at Fisheries and Oceans Canada, studies ways to stall the invasion before the species can establish itself in the Great Lakes.

What are the implications of grass carp successfully reproducing in the Great Lakes watershed?
They’re a little further along in that invasion process than we had previously thought. Invasive species, however, are good invaders for a variety of reasons — one of which is that they can surprise us. We’ve been preparing for them by putting up early detection sites, but we were also disheartened to hear of the spawning in the Lake Erie watershed. But it doesn’t mean that the game is over.

How is this invasive species different from others?
In the past, we were in a position where we were dealing with an invasive species after they’ve invaded. This time we have a unique opportunity to see the invasion occurring up the Mississippi River towards the Great Lakes. We’re in a position to be proactive and prevent the invasion from happening in the first place.

What is the cost of keeping the carp at bay?
Approximately $3 million a year. It would be an exponential increase to manage a well-established population. In comparison, we spend over $8 million a year trying to minimize the impact of the sea lamprey on the sport fishing industry.

Given the carp are coming from the south, how important is it to collaborate on this issue with the United States?
Right now, this invasion is in our backyard, but it’s on their doorstep. We need to work with them to ensure that what they’re doing helps us. We also have a lot to learn from them. Our program is less than a year old, but they’ve been dealing with this for a decade. Being involved with them and learning about cutting-edge science and new management techniques just puts us ahead of the game instead of playing catch-up.

What would happen if the carp established a population in the Great Lakes?
It really depends on which species we get, as each feeds on a different part of the food web. In general they’re all large-bodied fish, and can eat 20 to 80 per cent of their body weight in a day. They just out-compete our native fish. We also wouldn’t see an impact immediately — the effect would be felt in generations. That doesn’t mean that we have decades to just sit back and wait for a problem, which is why we’re so focused on preventing the invasion now.

For more information about Asian carp and what you can do if you encounter one, visit www.invadingspecies.com/invaders/fish/asian-carp 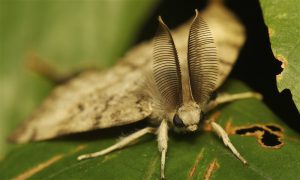