Could amphibious buildings be part of the solution for flood-prone James Bay communities?

In May 2014 flooding forced the people of Attawapiskat, Ont., to evacuate their Subarctic First Nation community. It was not the first time. Persistent spring flooding regularly disturbs life and threatens health in Attawapiskat and its James Bay neighbours, Fort Albany and Kashechewan.

Elizabeth English, a University of Waterloo professor of architecture, designs flood-resistant houses that she’s convinced could help. What keeps her homes dry inside when others are getting soaked? It’s simple: they can float.

“They look like ordinary houses,” says English, “but they have a buoyant foundation, made with Styrofoam or air-filled chambers. When the flood comes they work with the water rather than against it.”

As flood waters rise, the houses rise too, attached to vertical poles that keep them from floating away. When the water recedes they settle back down to the ground, undamaged. “The evacuated residents can return sooner, because there’s no lengthy wait for repairs,” explains English. “The disruption and the cost of a flood are dramatically reduced.”

English witnessed the devastation of Hurricane Katrina in New Orleans, and shortly afterward oriented her research toward helping vulnerable communities cope with flooding problems. She has designed amphibious foundations, both new and retrofitted, for Louisiana, and sees parallels there with Canada’s northern First Nation communities. “Like many First Nation communities, people in south Louisiana are very attached to their place of origin. They would rather adapt than move. And the housing is similar — lightweight wooden structures slightly elevated on platforms or short piers. We can retrofit these easily.”

English has discussed amphibious houses with interested community leaders in James Bay, and is making plans to meet with flood-prone First Nation communities in Manitoba. She’s enthusiastic about the possibilities. “They’re a proven, low-cost, low-impact flood protection strategy that provides better flood resilience and improves a community’s ability to recover from disaster,” she says. “So why fight floodwater, when you can float on it?” 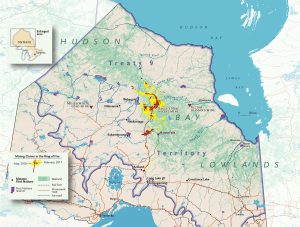