Coppermine 2012: Expecting the best; preparing for the worst: Shipshape 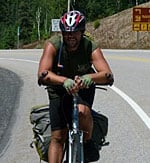 My two old canoes are works of art, embodying the feeling of all canoemen for rivers and lakes and the wild country they were meant to traverse. They were made in the old tradition when there was time and the love of the work itself … When l look at modern canoes, of metal or fiberglass stamped out like so many identical coins, l cherish mine even more … Sixteen feet in length, it has graceful lines with a tumble home or curve from the gunwales inward … No other canoe I’ve ever used paddles as easily. Sigurd Olson, Tradition

“Why on earth are you bringing a wooden canoe on this trip?”

I’ve heard that question, and seen those looks of incredulity on people’s faces, too many times to count since the six of us began planning the Coppermine River 2012 expedition.

Truth be told, it’s a tedious task to explain to those who haven’t paddled in one before. My canoe didn’t come off a factory assembly line; it was a labour of love, built by those who yearn to keep the tradition alive. I can only imagine the hours and time spent steaming the individual ribs to fit over the mold, the hundreds of tacks meticulously hammered into place to secure the sheeting, the wooden gunwales and thwarts carefully fashioned to secure the integrity of the canoe’s shape.

Long before the first spike of Canada’s transcontinental railway was hammered into the ground, and the last kilometre of our national highway paved from Victoria to St. John’s, travelling across Canada’s vast expanses of land in the months where her rivers and lakes were free of ice was mostly done by canoe. It was the canoe that sustained the livelihood of many indigenous peoples, and it was the canoe that facilitated the economic engine that was the trade in furs.

The canoe is symbolic of Canada. It traces our past, allowing people to disconnect from the complexities of the modern world, an environment increasingly driven by our insatiable appetite for electronics, and to reconnect with the simplicities of the past.

My 17-foot wood-canvas prospector canoe, “Big Blue,” will be accompanying the six of us on this expedition. Before the onset of cheaper, lighter, aluminum and fiberglass models, canoe materials were completely harvested from the land; birch bark canoes and hollowed out trees referred to as “dugouts” were just a couple of the myriad ways in which the canoe was constructed.

Big Blue’s ribs, gunwales and sheeting are all fashioned from a cedar tree. The hull is covered with a piece of waterproofed canvas for added protection. If I had my choice, we’d be doing this trip in a traditional 26-foot-long voyageur canoe to really capture the experience of the fur trade era, but that would be a tough sell with my travelling partners. Six guys confined to one canoe for 60 days in the bush? I think we’d drive each other to the brink of insanity.

Of all of our discussions leading up to trip departure, none has been as impassioned as the traditional vs. modern travel techniques debate. Being the gentlemen that we are, we’ve settled on a hybrid of sorts. I’m a bit of a traditionalist, and I know for certain that Big Blue is, true to its name, big enough to carry a heavy load and navigate its way through inclement weather, just as any other boat made from some composite material. It moves well on the lakes and is versatile in whitewater.

As for durability, if canoes were cars, a wooden canoe would be a Jeep Grand Cherokee. One of those newfangled lightweight ones? A Ford Fiesta.

Practical matters aside, wooden canoes have been places. They traversed inland waterways heavily loaded down with supplies during the fur trade era; they crossed lakes, went up and down rivers in high and low water, rubbing against rocks, encountering log jams and crossing over countless portages. Yes, they are in some ways old-fashioned, but they are by no means ready to be mounted on a wall as a relic of the past, or solely used for paddling on a calm summer’s night.

I think about their rich history when I’m paddling in the comfy confines of my wood-canvas canoe, appreciating its profound beauty and feeling at one with the landscape around me. 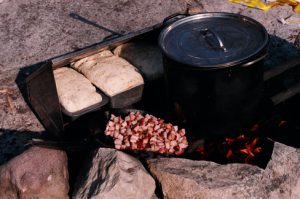 Coppermine 2012: Expecting the best; preparing for the worst: Wilderness cooking 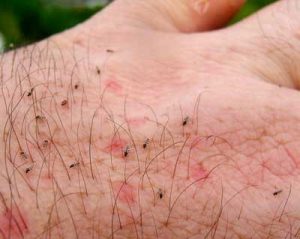 Coppermine 2012: Expecting the best; preparing for the worst: The bugs