Civil rights activist Viola Desmond will make history once again as she becomes the first Canadian woman to be featured on a regularly circulating banknote. Minister of Finance Bill Morneau made the announcement this morning at the Canadian Museum of History, along with Governor Stephen S. Poloz, Minister of Status of Women Patty Hajdu and Wanda Robson, Desmond’s sister and the woman responsible for championing the activist’s story.

“Today…we celebrate the role that women have played throughout our history in Canada,” said Minister Morneau. “It’s a great pleasure for me to announce officially the woman who will be on our new Canadian $10 bill. She reminds all of us, today and for future generations, that moments of courage and dignity can truly change our lives forever.”

In 1946, Desmond famously challenged a New Glasgow, N.S. movie theatre and the Nova Scotia government after refusing to sit in the section reserved for people of colour. She was subsequently dragged from the theatre, jailed overnight and fined $26.

Watch the webcast of the announcement, including a speech by Viola Desmond’s sister, Wanda Robson.

Desmond’s banknote is the culmination of the Bank of Canada’s #bankNOTEable campaign, launched on International Women’s Day (March 8) in early 2016 with the goal of selecting an iconic Canadian woman to be featured on a bank note. A combination of public nominations and an independent advisory committee chose a long list of 12 notable women followed by a short list of five candidates, which included E. Pauline Johnson, the Indigenous poet, Elizabeth MacGill, the first woman in Canada to receive an engineering degree, Fanny Rosenfeld, Olympian, Canada’s Sports Hall of Fame inductee and journalist, Idola Saint-Jean, Quebecois suffragette and activist, and Viola Desmond.

The campaign came after Merna Forster, a Victoria-based historian, writer and educator, received more than 73,000 signatures on her petition for the Bank of Canada to feature a Canadian woman on a banknote. Read more about her petition.

“This is an important step towards gender equality on our money, and I hope that we can look forward to seeing another Canadian woman join her in the next series,” said Forster. “Wouldn’t it be great to honour an Indigenous woman on the new $5 bill?”

Viola Desmond’s movie ticket is featured in Canadian Geographic’s upcoming special issue The Story of Canada in 150 Objects, produced in partnership with The Walrus for Canada’s sesquicentennial. Here’s a sneak peek written by Harry Wilson.

“All I wanted was to see a movie.” So says the character who plays Viola Desmond in the Heritage Minutes film of the black business owner’s experience with racial discrimination in a -theatre in New Glasgow, N.S., in 1946. Desmond took a stand when she refused to move from the main floor to the balcony, where non-whites usually sat — a decision that saw her arrested and eventually convicted of failing to pay a one-cent tax (the price difference between a balcony and main-floor seat). It soon became obvious, however, that Desmond had violated not the law but the theatre’s unspoken custom of segregation. The courage she showed in refusing to be a second-class citizen wasn’t officially acknowledged until Nova Scotia pardoned her in 2010, 45 years after she died and 64 years after her “crime.” 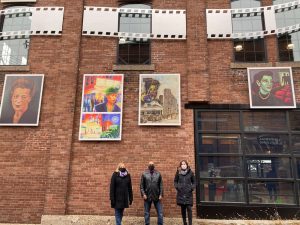 On Nov. 8, 1946, Viola Desmond made history at the Roseland Theatre in New Glasgow, N.S. Seventy-five years later, the building’s exterior pays tribute to her life through art.