A loud crack followed by cheers echoed across the wide green lawn of the parade square at Fort Anne as students scrambled to score a run for their team. On the very spot that once served as the heart of British and French colonial life on Canada’s east coast, a group of Alberta students engaged in a messy but enthusiastic game of cricket.

“It’s hard because you’re used to throwing a baseball,” said 13-year-old Hannah Stephenson. “Pitching and batting were my favourites. I got some people out!”

This was the first day of an exciting Maritime adventure for Allison Overbeeke’s Grade 8 class from Lethbridge Christian School in Alberta. Back in April, the class won Canada’s Coolest School Trip. This year’s prize? An all-expenses-paid trip to Nova Scotia.

The annual contest, hosted by Canadian Geographic Education in partnership with Parks Canada, Historica Canada and the Canadian Wildlife Federation, asks Grade 8/Secondaire 2 students to create and promote a one-minute video about a Canadian national park and its natural or cultural importance. The Lethbridge students won this year’s competition with their entry about Waterton Lakes National Park.

On June 5, Air Canada, a competition sponsor, flew the 17 students and their chaperones to Halifax. For more than a third of the students, it was their first time on a plane.

From the airport, they immediately set off for Nova Scotia’s northwest coast, where they visited the Grand-Pré National Historic Site. This site commemorates the vibrant culture of the Acadian people who settled the area in 1682, and the tragic history surrounding their deportation by the British, which began in 1755. Grand-Pré means “great meadow” and this picturesque area is also a UNESCO World Heritage Site.

The students took in a guided tour of the Acadian ancestral homeland, including a re-enactment of Henry Wadsworth Longfellow’s epic poem “Evangeline,” about the Acadian expulsion. They camped at Grand-Pré overnight before heading to their next stop: Fort Anne National Historic Site.

Fort Anne became Canada’s first National Historic Site in 1917, and has a long history of competing settlement and conflict between the Mi’kmaq, Scottish, English and French. The Scots first erected a military fort on the site in 1629, and the French added to it in 1643, before the site fell to British troops in 1710.

An official welcome from the fort’s “town crier” kicked off a morning of fun for the students that included the cricket lesson as well as a document conservation workshop where they played detective to determine the origins of damage to historical documents.

In the afternoon, they visited Port-Royal National Historic Site, where they were greeted by a Samuel de Champlain reenactor, who inducted them into the “Order of Good Cheer.” This special order was founded at Port-Royal by Champlain in 1606 to improve the morale of his men during difficult times. It was was viewed as a sort of competition in which the men took turns hosting a feast.

Just like these early French settlers, the students enjoyed a traditional dinner of chicken, roasted carrots and turnip, salad, and apple crisp for dessert, while a fiddler played in the background. After dinner, Joël Doucet, an interpreter at Port-Royal, gave a woodcarving and shingle-making demonstration. He showed the class how to use a spring pole lathe, one of the earliest known woodworking machines. A few students even tried their hand at turning a table leg.

The evening concluded with a glimpse into the local Mi’kmaq culture in the form of a “gathering song.” Although too shy to sing lyrics in a different language, the students did take part in the drumming. At the end of the day, they made their way back to Fort Anne, where they took up lanterns and headed into the 300-year-old Garrison Graveyard for a candlelit tour of Canada’s oldest English graveyard. 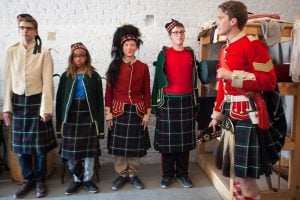 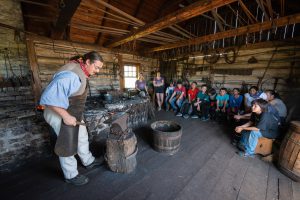