Before she went to Mount Everest’s base camp, documentary filmmaker Dianne Whelan thought it was a hallowed ground, a place of honour and bravery that she learned about as a child. But after only a few hours there in 2007, amidst what she describes as “the ego, the selfishness, the garbage and the desecration of nature,” the “noble myth” she believed in died.

Three years later, Whelan returned to Mount Everest’s base camp with her camera to expose the ugliness she uncovered on her first visit. Instead, she discovered she was no different than the climbers she had gone to criticize.

In her new book Base Camp: 40 Days on Everest, Whelan chronicles her unexpected journey inward while filming her subjects’ journeys upward. The book is a companion to her 2011 movie 40 Days at Base Camp. While the documentary is devoid of Whelan’s voice, the book is a diary-style account of her time at base camp. Each provides a different account of the same 40 days that dramatically changed her life and the lives of the climbers.

What was it about Everest that inspired you?

It represented something to me that was really noble and beautiful. When I went the first time in 2007, that nobleness died. The mountain had been such a metaphor for human ambition, but for me, what was happening there—the garbage, the ambition, the stealing—was like an updated version of that metaphor. The more I reflected upon it, the more compelling I thought it would be to go back because I found it to be such a dark place.

But you end up discovering that darkness within yourself. How did it happen?

The ambition at base camp is raw and extreme. It’s a hard place. When I went there the first time, all I could see was the ego and selfishness, the ambition gone wrong. But you have a lot of time to think at night. By day, I was pointing the camera at other people, but at night, it was pointed within. After spending almost 40 days there, everything I saw that was dark in other people I saw in myself. I realized that if I ran out of oxygen and was dying, I would steal some. That is not the person I thought I was when I got there, but it was the person I realized I was before I left.

Is that why you wound up making a different film than you had planned?

I expected I was going to make a really critical film. I wasn’t anticipating that much self-awareness. I didn’t realize how contemplative the process was going to be, that I was actually going to find goodness in all the people that I was there to rip apart. It was a much kinder film because it was so much harder on myself than I thought it would be.

The most shocking part of the book is what happens when you return home. Without spoiling it, can you describe what those 40 days did to you?

Human ambition is a great thing, but if it’s out of balance, it’s destructive both to the world and ourselves. We get caught up with so many things, such as our careers and what we need to own, but at the end of the day, it’s like my grandmother used to say: “You don’t see a hearse pulling a U-Haul.” We can’t take anything material with us. At the end of the day, it’s the hands you hold that matter. 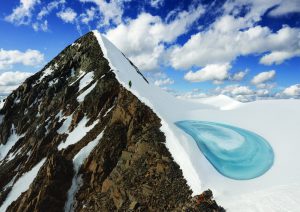