Gardeners dig into a history of resilience to feed people during COVID-19
By Julia Duchesne
June 8, 2020

During the COVID-19 pandemic, getting food is a complicated task. Physical distancing guidelines, economic hardship, and food shortages are all making it harder to shop for groceries. Across Canada, Indigenous communities are growing food as part of long-term efforts to improve food security. Here’s how they’ll be tackling the summer ahead.

Gardening goes way back on Haida Gwaii. “In Old Masset and Skidegate, there's old, old gardens,” says Missy McDonald, a councillor with the Skidegate Band Council. McDonald, who is Haida, learned from her great-grandmother: “My great-nanaay was a very good gardener, and she grew fruit and berries and vegetables, and she shared a lot.”

In the 1970s, most local households canned enough fish, berries and fruit to eat through the winter, but interest in gardening later began to wane in Skidegate. That’s now changing. “People are starting to see a need to try to reconnect and also save some money too,” says McDonald, who sits on the food bank board and food security committees. Now, three community gardens are flourishing in Skidegate, and the Skidegate Band has planted 75 fruit trees throughout the community. The elementary and high schools have greenhouses, and kids bring plants home to their families.

Gardeners are growing everything from squash, tomatoes, and artichokes to medicinal plants and even the starchy, bumpy traditional Haida potato. McDonald helps set people up with any soil, pots, or seeds they need. “Whenever I see someone trying to start something, I stop by and I yell from the road, ‘Do you need something?’” she laughs. She estimates that a quarter of the community’s 360 households are now gardening. Recently, four new greenhouses went up in one week.

As summers get hotter, months can pass without rain. Rain barrels help capture water that would otherwise drain quickly from Skidegate’s rocky ground, while water-saving workshops encourage people to save greywater for their gardens. Not much is wasted in Skidegate, which aims to become one the greenest villages in Canada.

Food security is a team effort; McDonald credits local fishers, hunters, farmers, and gardening mentors for their work during the pandemic. “Without them, you know, it would be a lot harder to feed these people.” A food security box goes out weekly to 90 families, featuring wild and traditional foods like deer sausage and halibut along with pantry staples.

Meanwhile, the Haida Child and Family Services Society coordinates families to tend the greenhouse and raised beds at the local health centre. The Healthy Haidas Initiative provides soil for people to take home. Pantry coordinator Erica Stocker connects families with seeds, pots, and gardening tips. With many parents out of work during the pandemic, McDonald says gardening gives kids and adults healthy food - and the pride that comes from feeding your family.

It also helps McDonald stay spiritually grounded in a difficult time. “We can’t hug our Elders, we can’t hug our parents,” she says. “During this time, because people can’t be with their extended families, because we are so family-oriented, getting back to the land and the sea will help ground them. That's what's going to really get us through this time. Our food is our medicine.”

On a recent early morning walk, McDonald had an epiphany about the pandemic. “This is something that a higher spirit has done to us, to make sure we understand that we are not as big as we think we are,” she says. “The sea creatures are doing better than they have in years. The skies are clearing up because there's not as many planes in the air ... Things are changing, all because of this. Maybe this is just a way for us to hit the button and restart and realize that we have to respect the earth once again.” 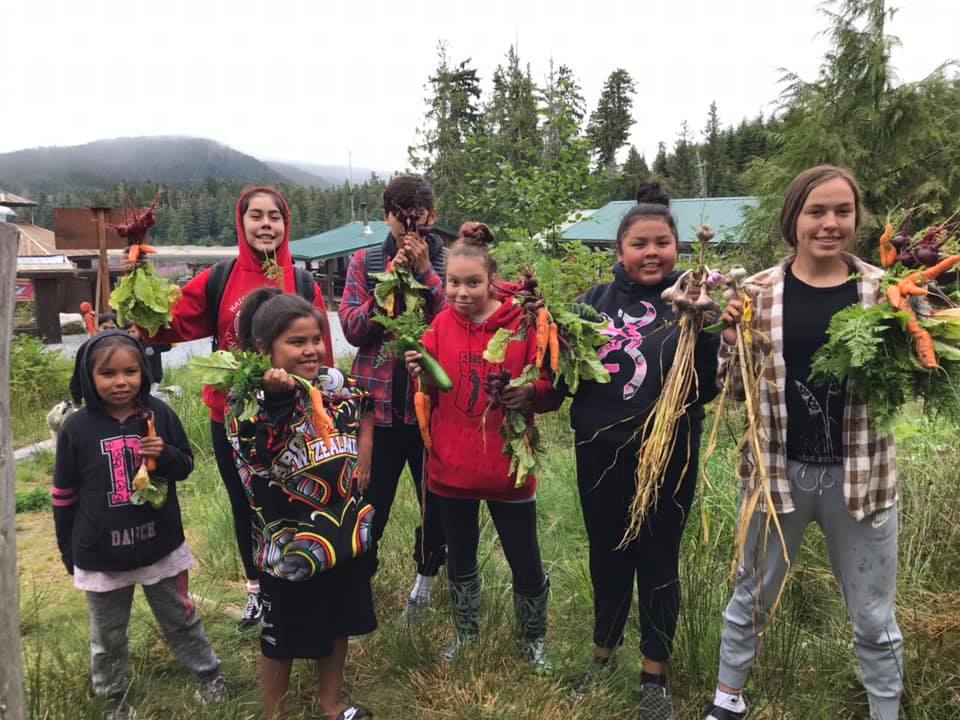 Across the Hecate Strait from Haida Gwaii is the Haíłzaqv (Heiltsuk) village of Bella Bella. In 2013, local nonprofit Qqs Projects Society started a garden at its summer field facility to offset grocery costs. 'Cúagilákv (Jess Housty), the society’s executive director, says it was so popular with youth and families that the organization built a community garden in the village in 2017, one of three in Bella Bella.

Qqs Projects works with the local health centre to build garden boxes for the community. The society’s summer students typically run workshops and support a few dozen households with gardening. When COVID-19 arrived in B.C., the provincial shutdown led to anxiety in the community, which relies on freight deliveries for groceries. “We're feeling very isolated where we are, feeling very remote. The systems we rely on feel very tenuous,” says Housty. Gardening is one way for people to take food security into their own hands.

By building raised beds, giving away seeds and soil, and mass-starting plants for new gardeners, the society is now helping people grow food in “Granny Gardens” at home. They’re growing every seed they have, from radishes, beets and bok choy to foot-long red noodle beans. In the community of just over 1,000 people, more than 70 households are now participating. 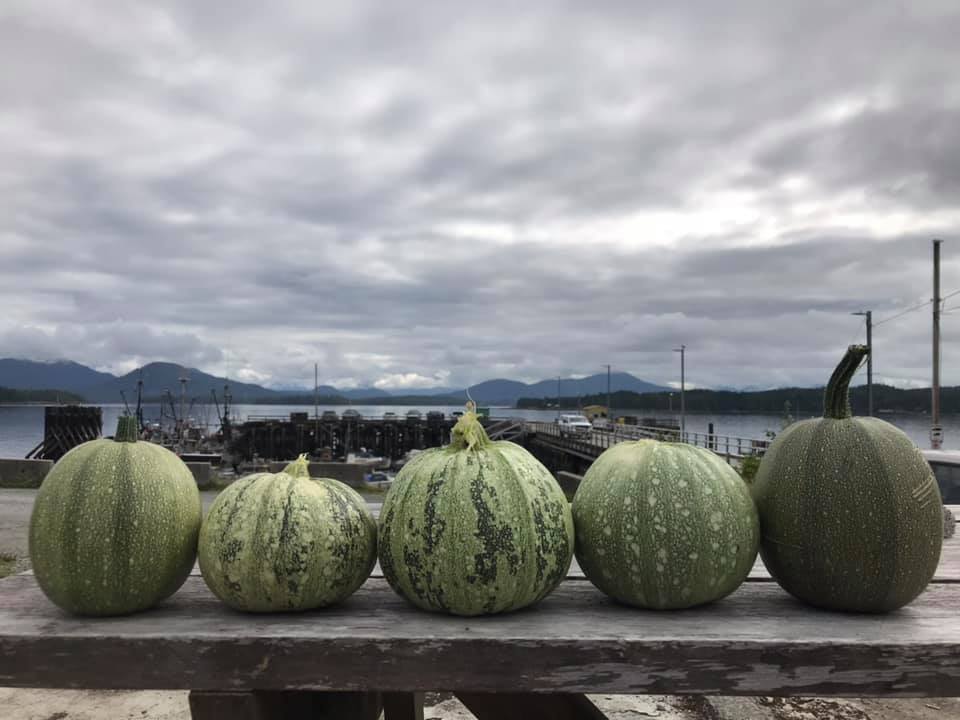 The “Granny Gardens” movement is a Haíłzaqv take on victory gardens. The name recognizes that gardening is an ancestral practice. “We've survived floods and famines and natural disasters, and we're still here,” says Housty. “Part of the reason that we're still here is because our ancestors maintained deep knowledge systems that enabled them to feed our people through absolutely anything.”

Haíłzaqv resilience stretches back generations. Bella Bella itself emerged from a devastating smallpox epidemic in the 1860s, one of many brought to the area by European traders. Before contact, as many as 10,000 or more people lived in over 50 villages spread across Haíłzaqv territory. “The lowest point in the census data after those epidemics was less than 200 people,” says Housty. The survivors gathered in Bella Bella.

“We are all Haíłzaqv people who are descendants of survivors of epidemics,” says Housty. “We've got this.” 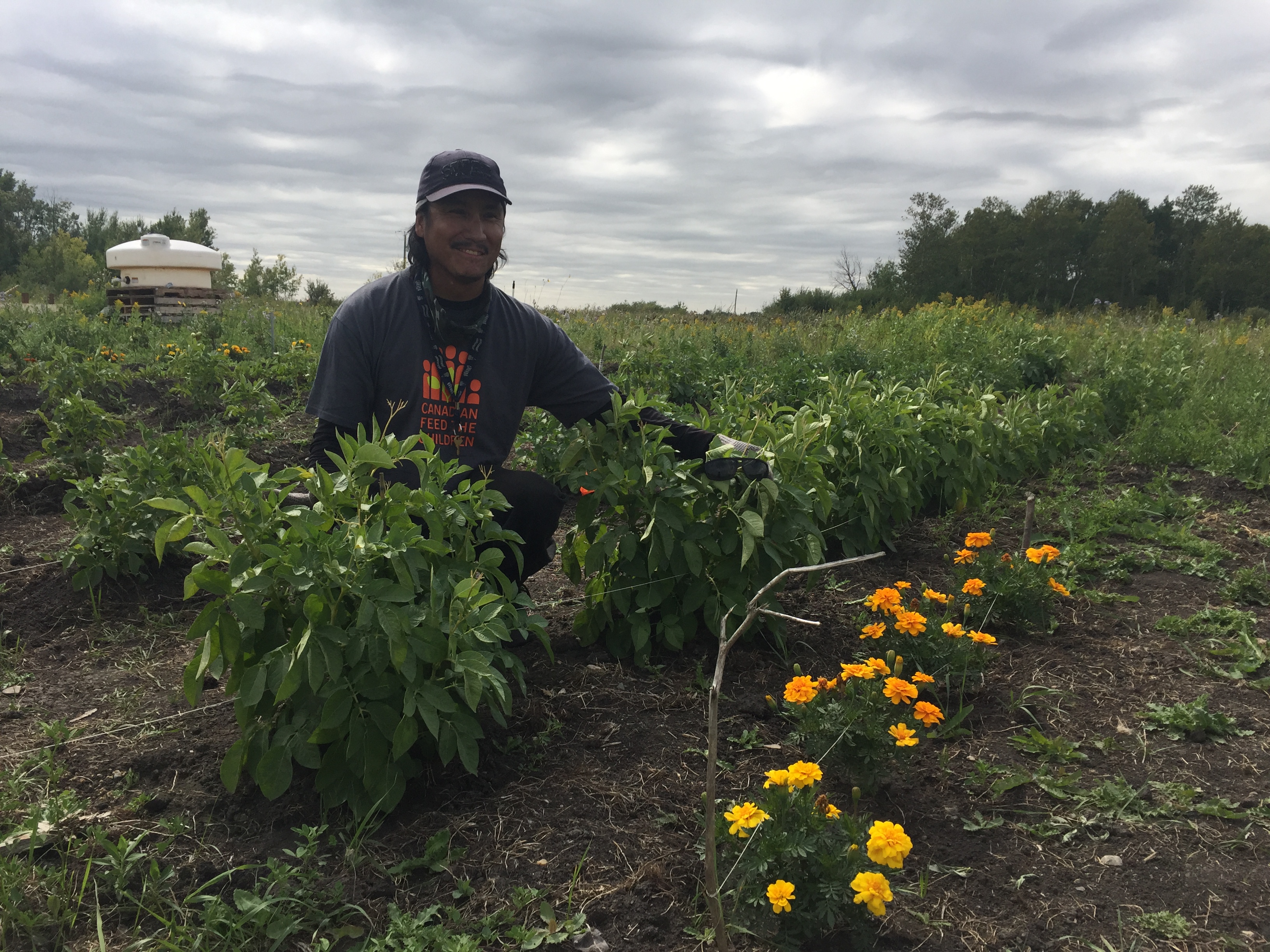 Volunteer Lincoln Cloud has devoted many years to the Waywayseecappo Community Garden and loves to experiment with new techniques. (Photo: Sarah Cameron)

On a chilly May morning, Michelle Brandon’s house in Waywayseecappo First Nation is full of seedlings. It’s not quite warm enough to move them into the greenhouse her husband recently built. Brandon gardens at home, with kids at the community daycare centre where she works, and at the Waywayseecappo Community Garden. She also teaches people how to garden, harvest medicines, and smoke meat.

“This has been taught down,” says Brandon. She learned about food security from her parents, who learned from theirs. “Trying to bring it back and revive it, and keep it going, is our plan.”

Brandon, Sarah Cameron, and Priscilla Jean Houle run the Kii Dah Kiin An 285 food security group in the Anishinaabe community in western Manitoba. Last year, they added dozens of apple trees and berry bushes to the Waywayseecappo Community Garden. “Every year our crop gets bigger and bigger,” says Cameron.

There are other gardens in town: the band office also grows produce for the community, and at the local school, staff and parents pitch in to cook a feast each fall with food grown and harvested by the students. Waywayseecappo is reclaiming the act of feasting. “It makes you feel good,” says Brandon. “You're feeding yourself, you're feeding your body, feeding your mind.”

Last summer, the women drove 1,000 kilometres north and as far east as Montreal to speak with other communities about food security and to build smokehouses (five so far). People from Waywayseecappo and nearby communities then came together for a festival in the community garden, sharing goose soup, moose stew, and bannock, and competing in neckbone-eating contests. They donated 30 hampers of produce from the garden to the local food bank.

“After our traditional food festival in the fall, we were able to sit back and look at each other and say, ‘We did it. We did everything on our bucket list this year,’ ” says Cameron with satisfaction.

Due to COVID-19, the team will stay closer to home this year, providing tools, raised beds, and motivation to help families grow food. “The only way that we can see the light at the end of the tunnel is through food security, through foraging, through medicine-collecting, through community gardening,” says Cameron. 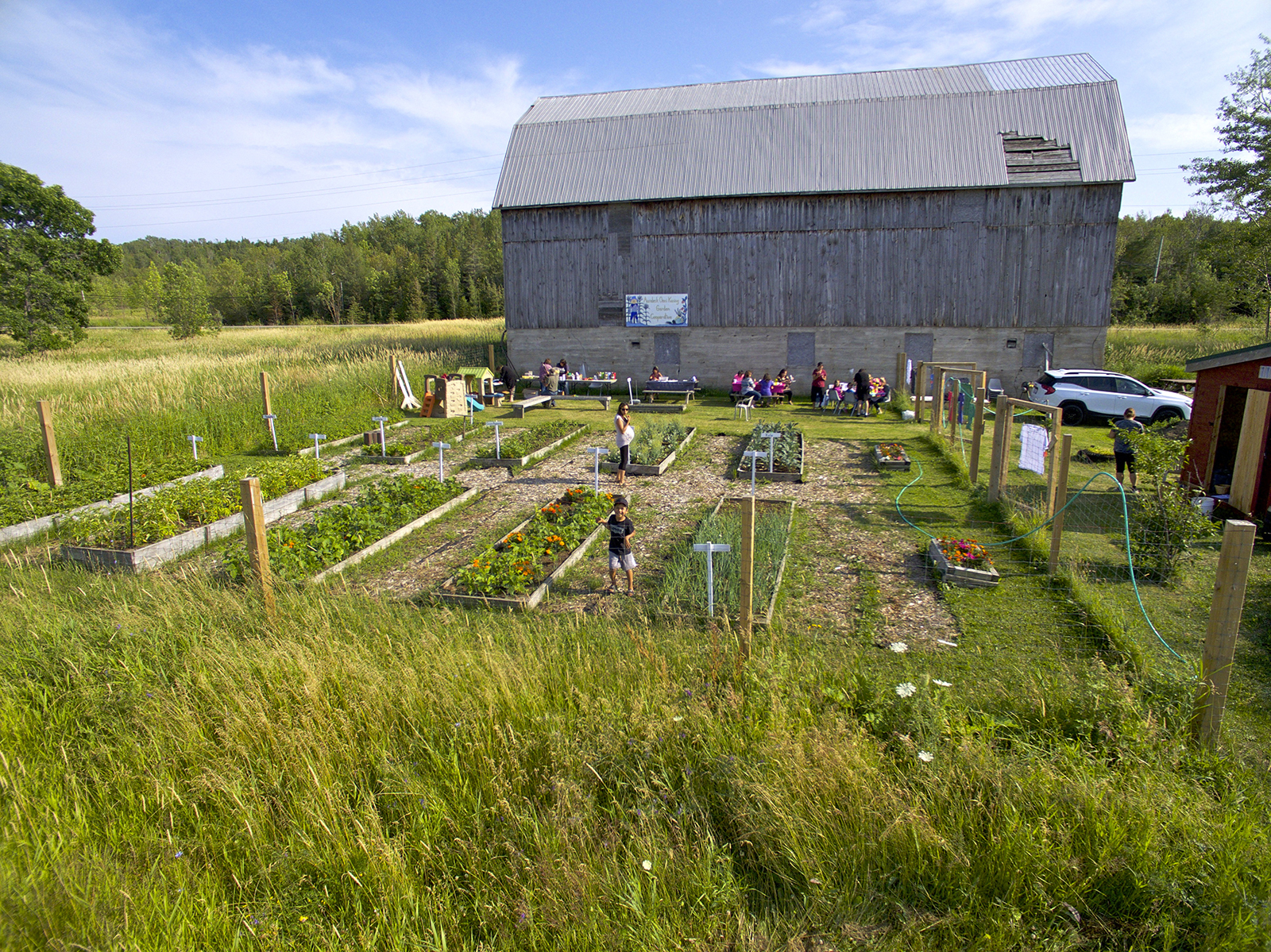 With grants from the Ontario Trillium Foundation and Ontario’s Local Poverty Reduction Fund, LFM helps people grow their own food. They’ve built more than 150 gardens at people’s homes, and they support community gardens in 11 communities on the island. Other initiatives include the Good Food Box program, which brings wholesale-priced produce to 200 households, and wild harvesting programs that put traditional foods on people’s tables.

Bickell loves hearing stories from across the island, like the community that grew all their own corn for their summer barbeque. “Community garden members are so proud that they actually grew it together and grew it themselves. It's such a sustainable, and beautiful, way to bring that food to people's tables and communities' tables.”

When COVID-19 hit, community gardens sprang into action to ramp up food production while following physical distancing guidelines. As people become more aware of their dependency on imported food, interest in local food systems has spiked. Bickell is hopeful that interest will continue beyond the current crisis. She says cultivating and harvesting food builds connections not only within communities, but also within ourselves. “Once people get going [with gardening], it really sticks with them, because it just feels good.” 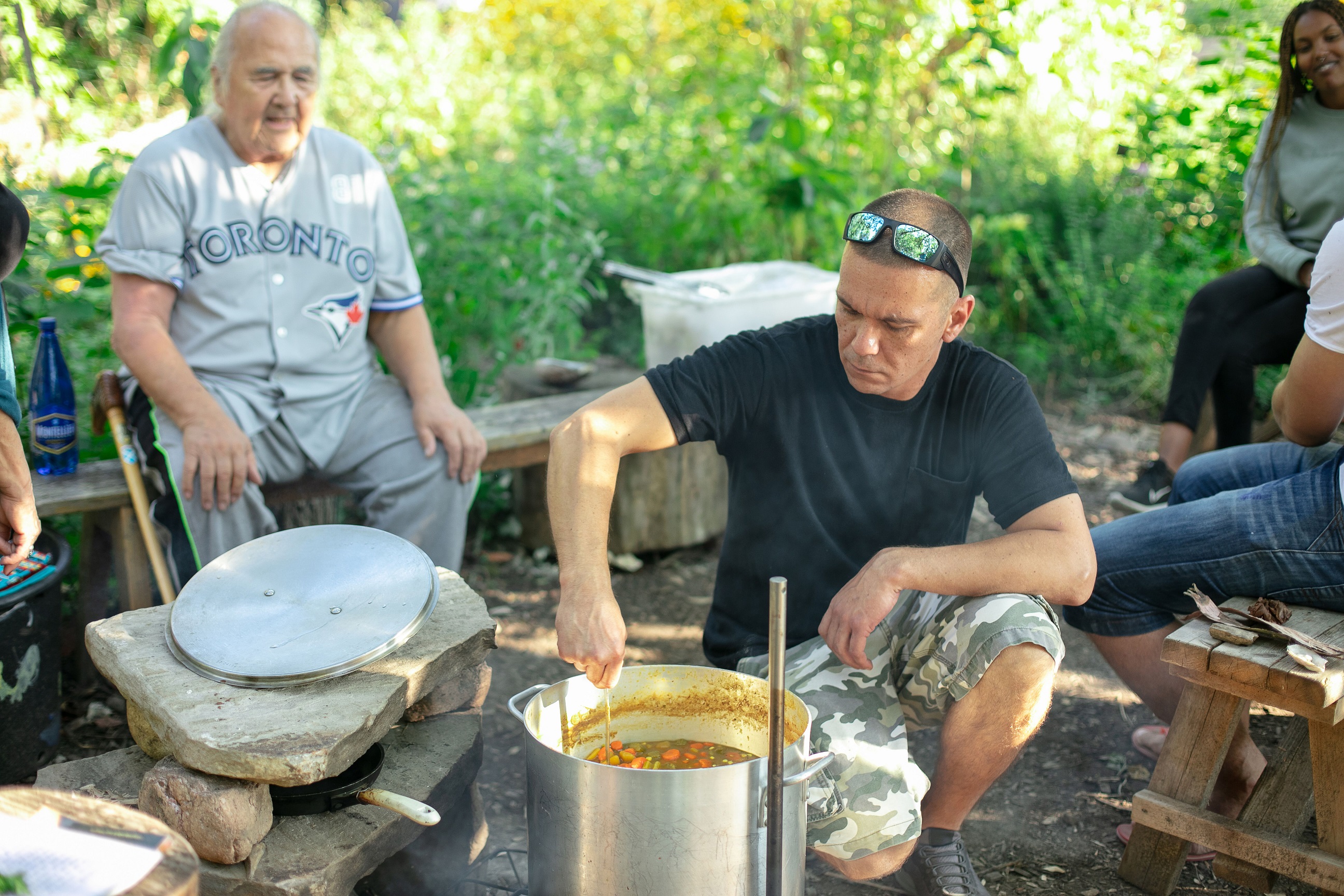 Mashkikii;aki'ing garden coordinator Nah-hak Hartmann tends a pot of food grown at the garden during an open house in 2019. (Photo: Zoe Alexopoulos)

Tucked in a park in Toronto’s west end, Mashkikii;aki'ing is a green oasis. Bees, birds and butterflies flit around the flowers. “Sometimes I totally forget that I'm in Toronto,” laughs Nah-hak Hartmann. “It's like the atmosphere changes when you walk into the garden.”

Mashkikii;aki'ing is an Anishinaabemowin word that roughly means “medicine Earth.” Hartmann works for community food centre The Stop as the garden’s coordinator. The medicine grown at Mashkikii;aki'ing, including tobacco, sage, and sweetgrass, is used for smudging and cultural programming and shared with other organizations. The garden also produces hundreds of pounds of food each year.

It’s tended by volunteers from the nearby Na-Me-Res shelter and transitional housing programs. On a typical day, Hartmann prepares a large breakfast of garden-grown food for a group of 20 or more volunteers. “There's a lot of guys who never picked something off a plant and just ate it,” says Hartmann. “If all your food comes pre-packaged in plastic and in boxes… you don't have that realization that it's the earth that's actually sustaining you.”

Covid-19 restrictions closed the garden to volunteers, leaving Hartmann to work alone, sending seedling photos to his volunteers. When Ontario opened up community gardens, Mashkikii;aki'ing got a permit to reopen with safety protocols in place. “I really miss doing programming with the guys, and eating together,” says Hartmann, who’s looking forward to welcoming people back to the garden. “We usually have a pretty good time.”

While working, the men share different cultural understandings of medicine and plants, and talk about food security and how food can be used as a tool – either for control and oppression, or to build community and bring people together.

Hartmann, who traces his ancestry to the Anishinaabe community of Neyaashiinigmiing, has seen the garden’s impact firsthand. Even after volunteers have found housing, they will stop by to work, relax, and snack on berries. “I've had people meet their family there, that they haven't seen in years,” says Hartmann. “They pick that as a spot to meet them.”

Youth from local schools visit Mashkikii;aki'ing to learn about Indigenous ways of knowing nature. The garden blows their minds, says Hartmann. “This garden in the middle of the city where you can eat everything… It seems like a magical place.”