Shamans, Spirits, and Faith in the Inuit North | Canadian Geographic

Shamans, Spirits, and Faith in the Inuit North

In this exclusive excerpt from Kenn Harper’s new book, the Arctic historian explores tales of Inuit and Christian beliefs and how these came to coexist — and sometimes clash — in the 19th and 20th centuries
October 10, 2019

In his new book In Those Days: Shamans, Spirits, and Faith in the Inuit North, Kenn Harper shares tales of Inuit and Christian beliefs and how they came to coexist —and sometimes clash — in the 19th and 20th centuries. During this period, Anglican and Catholic missionaries came to the North to proselytize among the Inuit, with often unexpected and sometimes tragic results.

Harper’s collection (published in early October by Inhabit Media) includes stories of shamans and priests, hymns and ajaja songs, and sealskin churches, drawing on first-hand accounts to show how Christianity changed life in the North in big and small ways. The following excerpt, “The wisdom of Aua,” details meetings between Greenlandic explorer and anthropologist Knud Rasmussen and the shaman Aua, of the Foxe Basin region. 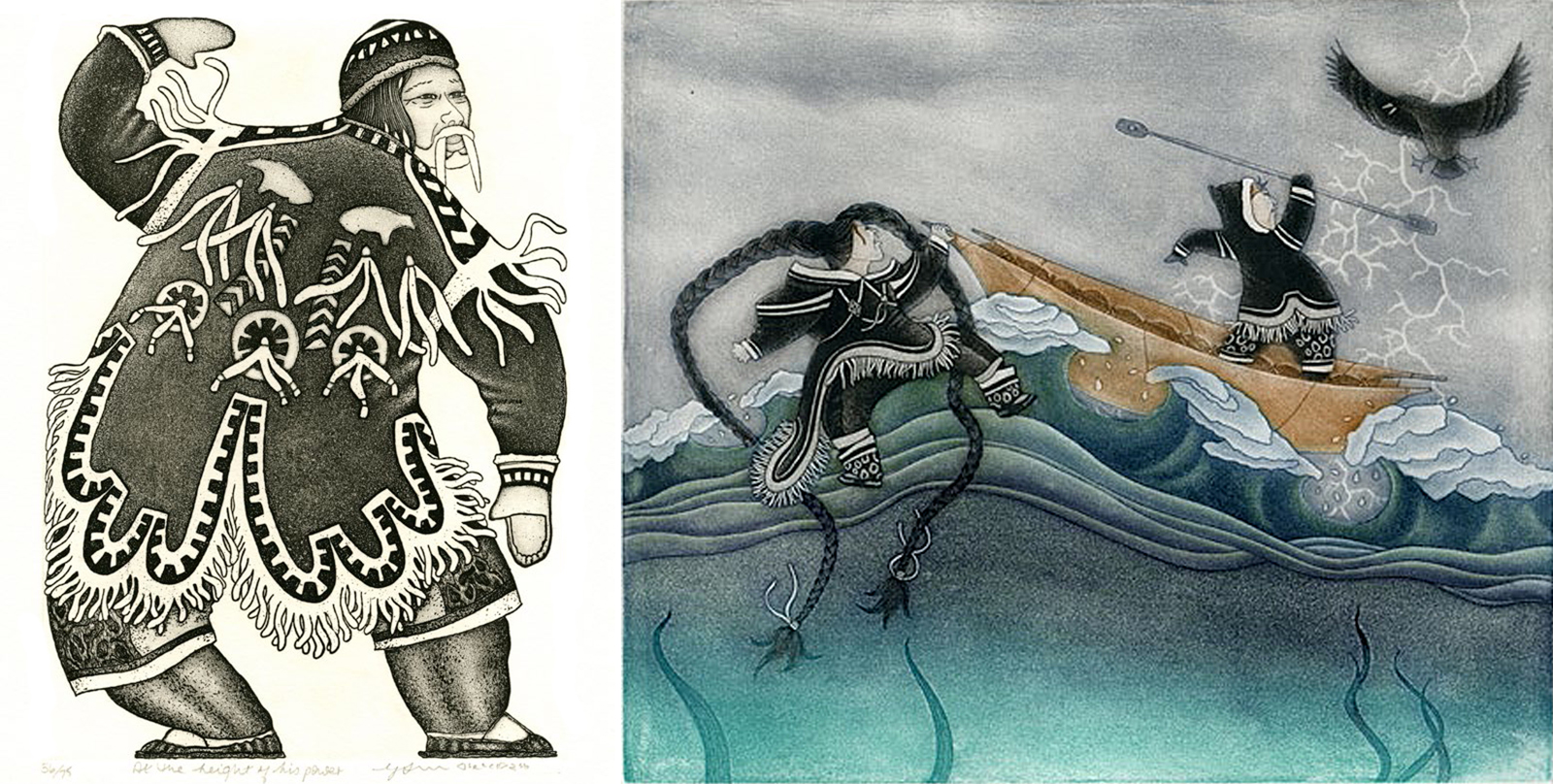 Shamans (left) mediated between Inuit and Sedna — also known as Nuliajuk, Taliilajuq, Uinigumasuittuq and Takannakapsaaluk (right, shown in her origin story, falling into the sea) — and other spirits that influenced Inuit life. (Left: Germaine Arnaktauyok, At The Height of His Power/courtesy of Inhabit Media; right: Germaine Arnaktauyok: Sedna — The Storm/courtesy of Inhabit Media)

From Shamans, Spirits, and Faith in the Inuit North

The wisdom of Aua

It was February 1922. Knud Rasmussen was travelling by sled with his Polar Inuit companions along the shores of Foxe Basin, north of Lyon Inlet. They were about to make camp for the night when suddenly, out of the darkness, appeared a team of fifteen white dogs pulling a long sled carrying six men. Sighting the party of strangers, a small man with a long beard, his face framed in ice and snow, leapt from the sled and ran towards Rasmussen. This, wrote Rasmussen, was Aua, the shaman.

Rasmussen’s mission was to study and record the myths and legends, the beliefs and the life stories of the Inuit of Canada, who had had little contact with outsiders. He spoke Greenlandic fluently, and so he was easily able to understand the dialects he encountered on his sled-quest across Canada’s North. He had heard of Aua from Inuit he had already met in Foxe Basin and was overjoyed to finally meet him. From Aua, his garrulous wife Orulo, and the others who lived in Aua’s camp, Rasmussen learned much about the customs of the Inuit.

Through several evenings of discussions with the men of the camp about the rules and taboos that governed life, it was apparent that everyone knew what had to be done in any given situation. But Rasmussen wanted to know more. He wanted to know why. And to this simple question, he wrote, they could give no answer. “They regarded it as unreasonable,” he added, “that I should require not only an account, but also a justification, of their religious principles.”

One evening, unable to answer the repeated question of “why,” Aua rose suddenly and invited Rasmussen to follow him outside, where a storm raged. He pointed to the ice and calmly remarked:

“In order to hunt well and live happily, man must have calm weather. Why this constant succession of blizzards and all this needless hardship for men seeking food for themselves and those they care for? Why? Why?”

By chance, hunters were returning from an unsuccessful day of hunting for seals at the breathing holes on the ice. Their efforts had been in vain, and Aua, turning the tables again, asked his companion, “Why?” Rasmussen could give no answer.

Aua led him to Kublo’s snow house, where the qulliq gave barely enough light and offered no heat to the children shivering under a skin blanket.

“Why should it be cold and comfortless in here?” the shaman asked. “Kublo has been out hunting all day, and if he had got a seal, as he deserved, his wife would now be sitting laughing beside her lamp, letting it burn full, without fear of having no blubber left for tomorrow. The place would be warm and bright and cheerful, the children would come out from under their rugs and enjoy life. Why should it not be so? Why?”

They continued to the house of Aua’s sister, Natseq, where Aua again questioned his questioner:

“Why must people be ill and suffer pain? We are all afraid of illness. Here is this old sister of mine; as far as anyone can see, she has done no evil; she has lived through a long life and given birth to healthy children, and now she must suffer before her days end. Why? Why?”

Silently they returned to Aua’s snow house and resumed their conversation. Aua began:

You see. You are equally unable to give any reason when we ask you why life is as it is. And so it must be. All our customs come from life and turn towards life. We explain nothing, we believe nothing. But in what I have just shown you lies our answer to all you ask.

We fear the weather spirit of earth, that we must fight against to wrest our food from land and sea. We fear Sila.

We fear dearth and hunger in the cold snow huts.

We fear Takannakapsaaluk, the great woman down at the bottom of the sea, that rules over all the beasts of the sea.

We fear the sickness that we meet with daily all around us; not death, but the suffering. We fear the evil spirits of life, those of the air, of the sea and the earth, that can help wicked shamans to harm their fellow men.

We fear the souls of dead human beings and of the animals we have killed.

Therefore it is that our fathers have inherited from their fathers all the old rules of life which are based on the experience and wisdom of generations. We do not know how, we cannot say why, but we keep those rules in order that we may live untroubled. And so ignorant are we in spite of all our shamans, that we fear everything unfamiliar. We fear what we see about us, and we fear all the invisible things that are likewise about us, all that we have heard of in our forefathers’ stories and myths. Therefore we have our customs, which are not the same as those of the white men, the white men who live in another land and have need of other ways.

This was Aua’s explanation. Clearly and calmly, he had outlined to Rasmussen why his question of “why” must remain an enigma.

The shaman Aua and his wife Orulo (left), and a drawing by Apak, their daughter, depicting a four-legged mountain spirit that she saw one night. (Images: Knud Rasmussen/courtesy of Inhabit Media)

In his questioning of Aua, Rasmussen asked about Inuit religious ideas, and in particular about the soul. Aua replied:

We ignorant Eskimos living up here do not believe, as you have told us many white men do, in one great solitary spirit that from a place far up in the sky maintains humanity and all the life of nature. Among us, as I have already explained to you, all is bound up with the earth we live on and our life here; and it would be even more incomprehensible, even more unreasonable, if, after a life short or long, of happy days or of suffering and misery, we were then to cease altogether from existence. What we have heard about the soul shows us that the life of men and beasts does not end with death. When at the end of life we draw our last breath, that is not the end. We awake to consciousness again, we come to life again, and all this is effected through the medium of the soul. Therefore it is that we regard the soul as the greatest and most incomprehensible of all.

Aua explained that most shamans divide the soul into two parts. These were, he said, “inuusia, of which we say that it is one with the spirit of life, and the spirit of life is something a living human being cannot do without. The other part of the soul is tarninga, perhaps the most powerful part of the soul, and the most mysterious, for while tarninga gives life and health, it is at the same time the site of disease, or the spot where any sickness enters in.”

He recounted to Rasmussen the Inuit belief that in the very earliest times, there was no death among human beings. But the island on which they lived, said by some to be the island of Mitligjuaq in Hudson Strait, became so overpopulated that eventually an old woman, with power in her words, began to shout, asking that human beings be able to die, or soon there would be no room left for them on earth.

Mysterious as the manner in which death came into life, even so mysterious is death itself.

We know nothing about it for certain, save that those we live with suddenly pass away from us, some in a natural and understandable way because they have grown old and weary, others, however, in mysterious wise, because we who lived with them could see no reason why they in particular should die, and because we knew that they would gladly live. But that is just what makes death the great power it is. Death alone determines how long we may remain in this life on earth, which we cling to, and it alone carries us into another life which we know only from the accounts of shamans long since dead.

We know that men perish through age, or illness, or accident, or because another has taken their life. All this we understand. Something is broken. What we do not understand is the change which takes place in a body when death lays hold of it. It is the same body that went about among us and was living and warm and spoke as we do ourselves, but it has suddenly been robbed of a power, for lack of which it becomes cold and stiff and putrifies. Therefore we say that a man is ill when he has lost a part of his soul, or one of his souls, for there are some who believe that man has several souls. If then that part of a man’s vital force be not restored to the body, he must die. Therefore we say that a man dies when the soul leaves him.

Aua pointed out to his questioner that it was somewhat unusual to be asked to think about these things, and that usually such subjects were far from people’s minds. “In our ordinary everyday life we do not think much about all these things,” he explained, “and it is only now you ask that so many thoughts arise in my head of long-known things; old thoughts, but as it were becoming altogether new when one has to put them into words.”

Kenn Harper is a historian, author, linguist, a Fellow of The Royal Geographical Society and The Royal Canadian Geographical Society, and a Knight of the Order of Dannebrog (Denmark). He lived in the Arctic for 50 years and now lives in Ottawa. He speaks and writes Inuktitut and his extensive work on Arctic history includes the books Minik: The New York Eskimo, and the series In Those Days: Collected Writings on Arctic History.