The disaster that reshaped a city | Canadian Geographic

The disaster that reshaped a city

100 years after the Halifax Explosion, the city retains traces of its pre-war life
By Nick Walker
December 6, 2017

There's a cracked anchor shaft mounted next to Spinnaker Drive in Halifax, southwest of the city’s ports. At half a tonne, the giant piece of shrapnel testifies to the sheer destructive power of the Halifax Explosion of Dec. 6, 1917. When the French munitions vessel SS Mont-Blanc was blown to smithereens 15 minutes after colliding with the Norwegian cargo ship SS Imo, the French ship's anchor snapped and was rocketed four kilometres from Halifax Harbour, slamming into estate grounds near its current resting place.

The Mont-Blanc had been carrying nearly 3,000 tonnes of explosives set for Europe, including picric acid, TNT and gun cotton. Windows were broken as far as Truro, N.S., more than 80 kilometres away, and the shock wave was felt in Sydney, Cape Breton, 320 kilometres distant. Halifax’s North End was levelled, more than 1,900 people died and another 9,000 were wounded. Recovering and identifying bodies in the rubble took months. Entire family names were struck from the city’s registry.

The map above depicts the impact zones of the Halifax Explosion in concentric circles; however, the actual shock wave would have been impacted by a variety of geographical factors and would not likely have expanded in perfect rings. The zones shown here are based on anecdotal evidence following the explosion. (Map: Chris Brackley/Canadian Geographic)

“Meanwhile, Canada was at war, and Halifax was perhaps the most vital cog, the main centre for convoy operations,” says Richard MacMichael, coordinator of visitor services and interpretive programming at Halifax’s Maritime Museum of the Atlantic. “The supply lines had to keep running, and because a chunk of the naval dockyard was spared and the crews of other ships were able to come ashore and help, convoys were sailing out of the city within a week.”

The dead were buried and the urban-industrial North End was slowly raised again, and is now home to landmarks such as the Halifax Shipyard. Today the neighbourhoods of the area (depicted on the map below) look nothing like they did prior to 1917, “But,” says MacMichael, “little bits and pieces are still there, in the root cellars and stonewall foundations of its homes.” 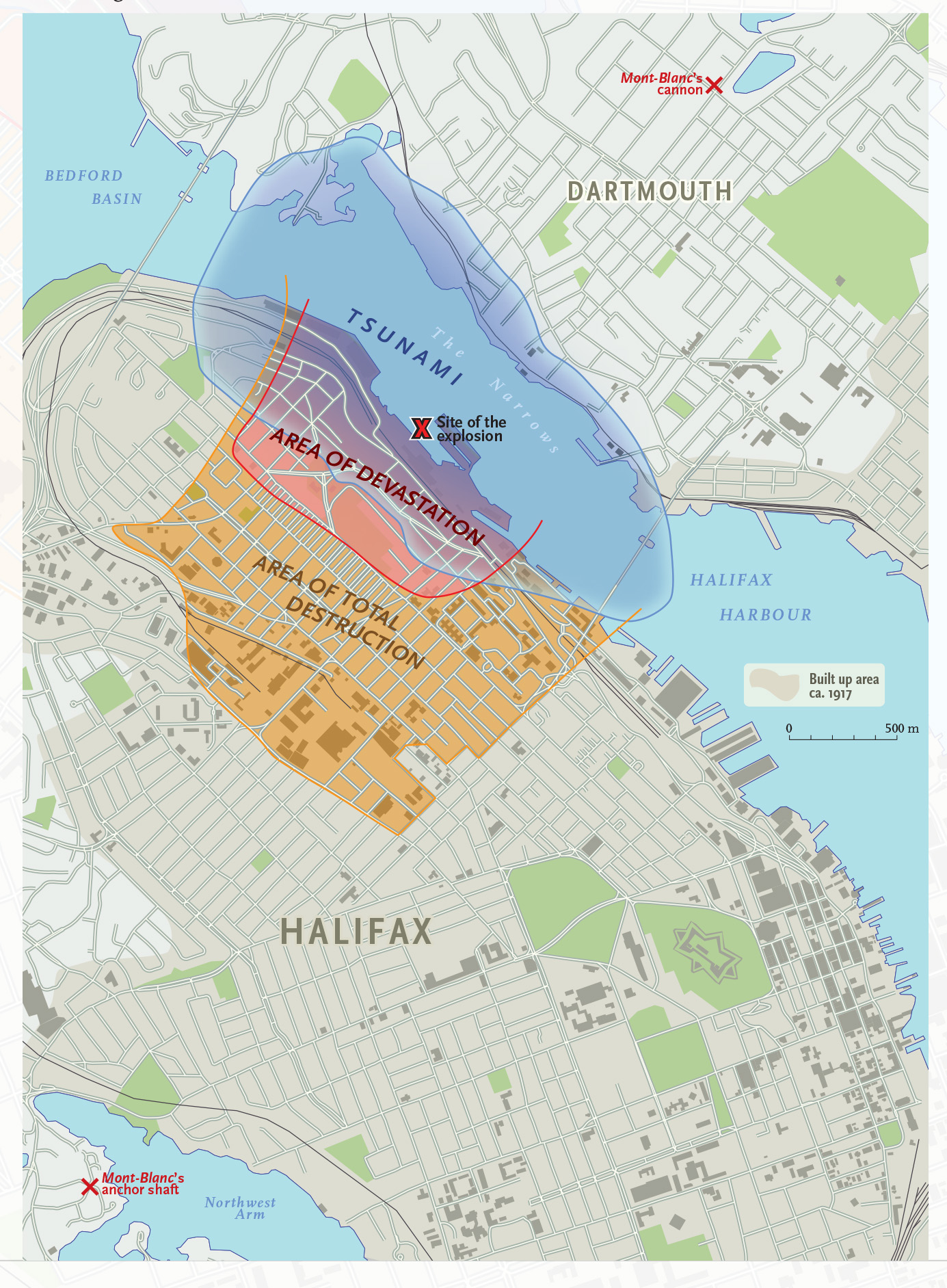 Map showing the extent of the impact and destruction caused by the Halifax Explosion of Dec. 6, 1917. (Map: Chris Brackley/Canadian Geographic)