Best-selling author and journalist, John U. Bacon discusses the 1972 Summit Series and how Team Canada radically changed the game

“More Canadians saw Paul Henderson’s winning goal with 34 seconds left in game eight than saw the moon landing three years earlier. And they watched the moon landing, it’s not like they didn’t care about it. I pointed this out to Wayne Gretzky, and he said, ‘This was more important.'”
– Author John U. Bacon – The Greatest Comeback

Fifty years ago this month, Canada’s best NHL players met the Russian national hockey team for the first time ever in the Summit Series. An eight-game series, set against the peak of the Cold War nuclear standoff.

Canadians were confident we would sweep the series, we invented the game after all. What unfolded was anything but. After four games at home, Team Canada had lost two games, tied one, and won only one. They were booed by fans during game four in Vancouver.

The Soviets had introduced a number of innovations that made them a far more formidable foe than anyone expected, like conditioning, emphasis on speed and tic-tac-toe passing around the net instead of booming slap shots and the dump and chase hockey favoured by the Canadians.

Based on his interviews with most of the remaining Team Canada members, author John U Bacon contends that the way the Canadians radically reworked how they played their game and win the series in Moscow changed the game more in the space of one month than it had in the fifty years previous, setting the template for hockey dynasties like the run and gun Edmonton Oilers in the 1980s and the hybrid game played around the world today.

John is a Canadian and American author and journalist.  Raised in Michigan, he has deep Maritimes roots. His best-selling books include The Great Halifax Explosion, The Spark, about Cirque du Soleil and Let Them Lead: Unexpected Lessons in Leadership from America’s Worst High School Hockey Team.

For The Greatest Comeback, he interviewed 17 of the remaining 22 Team Canada members at length.

Note: The organ rendition of “Oh, Canada” played at the end of this episode is from game 3 of the Summit Series in Winnipeg. Played by the late Barry Anderson. 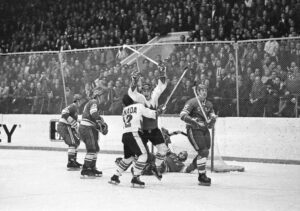 Interview with John U. Bacon on the 1972 Summit Series and its impact on hockey culture 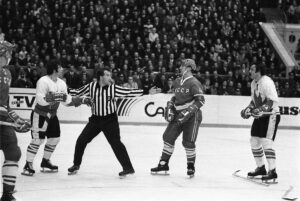 Excerpt from The Greatest Comeback: How Team Canada fought back, took the Summit Series, and reinvented hockey

Through fresh reporting and new perspectives, best-selling author John U. Bacon captures some of the best moments in Canadian sports history