Ray Zahab has run across some of the world’s hottest deserts, including the Sahara, Gobi, Namib and Atacama. He led a Guinness World Record-breaking trek on foot to the South Pole, as well as expeditions across some of the harshest terrain in the world, including many in the Canadian Arctic. In 2019, The Royal Canadian Geographical Society Explorer-in-Residence attempted to traverse Russia’s Kamchatka Peninsula unsupported, only to be turned back by unseasonably mild weather.

David McGuffin — a journalist and former CBC Africa correspondent and CTV News China correspondent with stints in Moscow and Rome, and most recently a senior editor with NPR news in Washington, D.C. — interviews the Royal Canadian Geographical Society Explorer-in-Residence, ultra-marathoner, extreme adventurer, educator, speaker and author in the premiere episode of Explore: A Canadian Geographic podcast.

Before he began undertaking his epic expeditions, Zahab, who grew up in the Ottawa Valley, was a heavy drinker and smoked a pack of cigarettes a day. It was his brother who inspired him to make a lifestyle change, he says.

“He had also been a smoker, but he had become a marathon runner and, in the mid-nineties, did an Ironman. I’d see him doing all this stuff and I was like ‘this guy’s amazing; I wanna feel the way he feels.’ ”

Zahab smoked his last cigarette on New Year’s Eve, 1999. “That morning, when I woke up in 2000, everything in my life instantly changed. I know it sounds corny, but it’s legit. [My progress] was pretty much logarithmic after that.”

I believe that people are capable of so much more — mentally, physically, and emotionally — than they give themselves credit for

His own experiences in his teens and 20s are a big part of why Zahab now tries to incorporate a strong educational component into all his expeditions, and why he founded Impossible2Possible, a non-profit organization that empowers youth through adventure and experiential learning.

“It’s very important to me, when I’m speaking at events, that people understand that I am just a regular person sharing stories with them, and that all of us are capable of the extraordinary.” 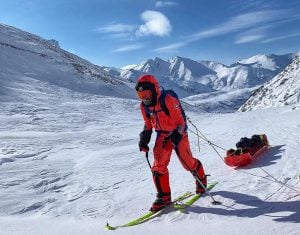 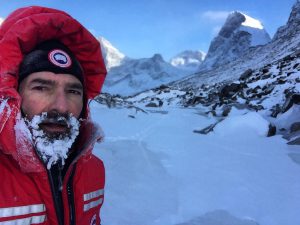 Ray Zahab, an Explorer-in-Residence of The Royal Canadian Geographical Society, and Italian ultrarunner Stefano Gregoretti will traverse an unpredictable landscape of volcanoes and snow