Plus: a new name for an old pest, a new fund for chimney swifts, giant sponges found on deepsea volcanoes — and the poison weighing down North America's eagles.

In the last week of February, Toronto Zoo welcomed a new — and lanky — addition to the family. And now he has a name! Born at the same time as the horrific events were esculating in Ukraine, the zoo has chosen the name Matumaini for the newborn giraffe — which means hope in Swahili — intended as an offering of hope for a peaceful resolution.

The calf and mother are both healthy, happy and leggy — the newborn calf was able to stand within an hour and a half after being born and was soon seen nursing. This is the second offspring for both mother Mstari, born at Toronto Zoo in 2013, and father Kiko, a nine-year-old male. The pairing of Kiko and Mstari was at the recommendation of the AZA Masai Giraffe Species Survival Plan, a cooperative breeding program among accredited zoos. The pair’s first calf, Amani — meaning peace in Swahili — was born 22 months ago, and is apparently curious about her new sibling. While seperated from her mother during the birthing process, she is able to smell and hear the new calf, and will be reintroduced once Mstari and Matumaini have forged a strong bond.

In December 2018, the conservation status of Masai giraffes was elevated to Endangered by the International Union for Conservation and Nature. Fewer than 35,000 Masai giraffes survive in the wild, having experienced more than a 50 percent decline in the past 30 years. Illegal hunting and habitat loss are their primary threats. The birth of Matumaini, therefore, is indeed a sign of hope.

Who lives on a volcano under the sea?

Huge sponges are thriving on the tops of extinct volcanoes deep under the ice in the Central Arctic Ocean in an ecosystem unlike any seen before. In a study published in Nature Communications, scientists from Bremen, Bremerhaven and Kiel on a POLARSTERN expedition found the sponge gardens on Langseth Ridge — an underwater mountain range near the North Pole that’s permanently covered by ice.

Very little food reaches these depths due to low light levels that dramatically reduce the production of algae. So, what do they eat? Sea sponges, while seemingly simple, are some of the most adaptive creatures in the ocean. These deepwater Arctic sponges host a microbial symbiont, which converts inorganic material to organic biomass. Thousands of years ago, the seabed these sponges now inhabit supported a rich ecosystem of plants and animals. While they’ve since died out, the sponges feed on their remnants. And since the sponges produce a mat of nutrients, they’ve created their own circular food trap. Little is known about the Arctic, but further study of “hotspot ecosystems” like this one will help protect the diversity of the sea. For now, the sponges will continue chowing down on leftovers from thousands of years ago.

“Spongy moth” has been formally adopted as the new common name for the moth species Lymantria dispar by the Entomological Society of America. (Photo: Distant Hill Gardens [CC BY-NC-SA 2.0])

Last summer, you may have done a double take when you heard the name of an invasive caterpillar. We did. The wildlife world is not immune to questionable nomenclature, and many — including the Entomological Society of America — found this to be the case for Lymantria dispar’s common name. The moth, known at its caterpillar stage for its insatiable hunger, will now be called the “spongy moth.” The ESA removed the previous common name, which was a derogatory term for Romani people, in July 2021. This came as a part of their Better Common Names Project. “When an invasive species carries the name of a nation or culture, it’s easy to unintentionally associate that culture with the pest’s harmful effects,” said Joanne Foreman, invasive species communications coordinator with the Michigan Department of Natural Resources. The spongy moth caterpillar is infamously known for defoliating over 17,000 square kilometers of trees in Canada since the 1980s. The new name comes from the French spongieuse and references the egg mass which looks and feels like a sea sponge. Read more on problematic names in the world of wildlife, here. 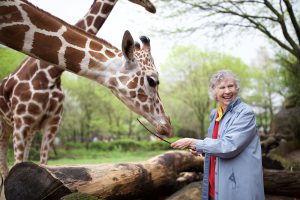