Plus: size matters for female bighorn sheep, the hidden migration of North American dragonflies, helping trees move north and the great white who drew itself

Narwhals are as hard to track as they are vulnerable. But how do you understand such an enigmatic oddball, let alone protect them? Chaos theory, that’s how.

Living secretic lifestyles and diving deep below the Arctic sea ice, scientists have struggled to keep up with the narwhal’s mysterious ways.

Enter, chaos theory. Defined as the study of activity that appears unpredictable, yet is governed by a strict set of laws, it has helped shed light on seemingly irregular behaviour in the movement of narwhals off the coast of East Greenland. Researchers from Hokkaido University, Japan, and the Greenland Institute of Natural Resources used a satellite tracker to follow the movements and dives of an adult male narwhal over 83 days. They then developed an analysis method using elements of chaos theory to find hidden patterns in the narwhal’s behaviour.

First, the whale tended to rest closer to the surface around midday, before diving particularly deep. Later, at twilight and at night, the narwhal stayed in shallower water but dove more intensely, possibly hunting for squid. It also reduced its surface activity and dove more intensely when sea ice was more abundant.

As sea ice dwindles due to climate change, narwhals, who rely on it so much, will face increasing challenges. Chaos theory may provide much needed insight and be valuable in their protection.

When it comes to bighorn sheep, males get all the glory, with researchers spending all kinds of time over the years studying how they use their massive horns — they can reach up to 100 cm in length! — for eating and fighting. But what about females, endowed with a much more modest set of horns? Turns out, size matters for them, too.

A new study out of the University of Alberta looking at the connection between horn size and reproductive fitness in bighorn sheep, found that female sheep with smaller horns are less reproductively fit. Study author Samuel Deakin found long-horned females have usually had their first lamb by age three, while their short-horned counterparts generally had their first lamb by age five.

The finding has conservationists concerned given that the males are a favourite among trophy hunters, who favour sheep with larger horns. As trophy hunters selectively eliminate males with large horns, females of the species could be affected, potentially slowing population growth.

Deakin and his colleagues examined 45 years’ worth of data on bighorn sheep in Ram Mountain, a remote area about 30 kilometres east of the Rocky Mountains near Nordegg, Alta. Although sheep in this region are no longer hunted, Alberta does allow hunting of other populations around the province.

Every fall, nature lovers flock to known monarch migration paths to watch streams of butterflies beginning their journey south to Mexico from their summer breeding grounds.

But if you know what to look for, you might also watch for another large insect that makes an annual pilgrimage to warmer climes.

Every summer and fall, there is a huge and largely hidden migration of common green darners, one of the most abundant dragonflies in North America. Three generations take part in the annual migration, which can be up to 1,400 km for the Canadian insects.

They begin flying south as early as July (in more northern areas) with the migration continuing through October. Large groups take off from Canada and the northern U.S. on their way to Mexico and the Gulf coast in a journey that can take several weeks.

The green darner is a massive dragonfly, reaching three inches (7.5 cm) long with a 3½-inch (9 cm) wingspan. Both males and females have bright emerald green thoraxes (the middle body segment).

Red spruce forests in West Virginia now have only about 5.5 per cent of their original land coverage still intact. The trees, however, may be saved by migrating north — that is, by extending their northern range where more favourable conditions may be found. But with a historic migration rate of about 650 to 1,300 feet a year, the trees have little chance of outpacing climate change by themselves.

Helping trees get to more hospitable climates through human interference is a controversial topic, but some researchers now believe it is mandatory for plant populations to keep up.

Forest ecologist David Saville has been working to bring back West Virginia’s red spruce forests by collecting cones, extracting their seeds and replanting them further north in Vermont and New Hampshire. The hope is that they will be able to produce their cones in several years to survive in a warmer, northern climate. Playing God with species may be debatable, but it could be the only way to preserve some of the Earth’s dwindling tree species.

Ready the Jaws theme song and prepare to be amazed. A great white shark named Breton has drawn a miraculous “self-portrait” using a GPS tracker as it travelled along the east coast of the United States. Named after Cape Breton, the shark was fitted with a tracking device by OCEARCH, a global non-profit organization, in Nova Scotia in September 2020 and has been observed ever since.

More than 13 feet long and over 1,500 pounds, the shark travelled along the U.S. east coast, swimming past New Jersey, Chincoteague, Va. and Long Bay, S.C., as it sketched a self-portrait, shocking marine scientists. Every time Breton surfaced, researchers from OCEARCH were able to track that shark’s movements as it drew a tail, pectoral fin, and body.

The purpose of tagging sharks is to help researchers understand more about migration patterns and where the sharks mate and raise their young. Individuals interested in shark tracking can also monitor sharks through the OCEARCH Shark Tracker App. 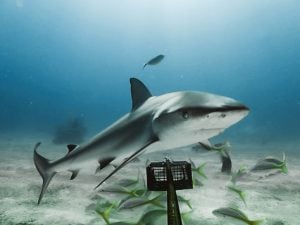