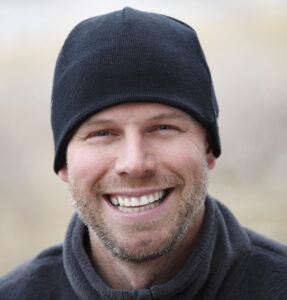 On July 14 everything changed. That morning, I ran into Underbrows while looking for tracks by the river. I was on foot a few kilometres from Waydeep and she was beelining straight for it.

I immediately headed for the lookout ridge to see if there was activity over at Waydeep. I didn’t spot anything that morning, but I returned in the evening and watched through binoculars as two adults played with two or three different gray-coloured pups across the river. I was so relieved. The family was still intact!

The next morning, I was on the trail by 6 a.m. I waded across the river to a new vantage point I had selected 100 metres to the east of the Waydeep ridge. My hiding spot not only enabled me to see the ridge and a bit of meadow 60 metres to my left, it also put me downwind of the core of the rendezvous. Better yet, I could approach it completely hidden from lupine lookouts up on the ridge.

By 8:30 a.m., I had wolves moving all around in front of me. Pups frolicking in the tall grasses to my left and adults sauntering through the trees at the back of the ridge directly ahead of me. I was both thankful and exhilarated to see so many wolves and to see them all looking so healthy, with resplendent, shimmering summer coats and fat, full bellies. The pups were constantly playing and chasing each other, which was another sign that the spring had been very good to the family.

As I sat there silently trying to get photos, I wondered where the wolves had spent the spring. I was now sure that they were moving south out of the park following the deer migration to lower elevations in the winter, but where were they denning? I had analyzed Google Earth a thousand times trying to figure out potential denning spots throughout the park and had visited most of them only to be skunked.

I decided to call Gudrun Pflueger, who had worked with an isolated population of coastal wolves with the Raincoast Conservation Foundation during summers in the early 2000s and simultaneously independently studied wolves living in Kootenay National Park during winters while working at Nipika Mountain Resort on the southern boundary of the park.

Gudrun told me how she had often followed the wolves out of the park in the winter to the south and that she had closely monitored a wolf trapping site less than a kilometre outside of the national park for several years. She also described the den site she had monitored, including the lookout point she had used to observe the wolves at the den. I had investigated it the previous fall, but had not found any evidence that it had been used for years. Still, I decided to spend a few days in late April and early May 2015 at Gudrun’s lookout on the off-chance Whitey and the gang might show up. Unfortunately, I came up empty handed.

At 9:30 a.m., a wolf pup at Waydeep began to wan- der right toward me. It had been playing tag with its siblings and I had lost sight of it in a thick patch of bush. I suddenly realized that it was coming through the vegetation right at me just 30 metres away. Rather than risk having it walk right up to me, I called out softly.

The pup froze. It looked around briefly, then started toward me again.

Again, the pup froze. It stared right at my lens through a tangle of twigs and greenery. I fired a series of shots and the light clicks from my supposedly quiet camera made the pup’s ears twitch. When it started forward yet again, I peered out from behind my camera so the pup could clearly see my head move and calmly said, “Look buddy, I don’t think you should walk over here.”

At this point, the pup was less than 20 metres away and its little face was filling my entire frame. As I talked, I slowly turned my head back and forth slightly so the pup could catch the movement. The pup stared wide-eyed at the moving, camouflaged head before it, then swiftly turned and scurried back to the meadow, where it promptly got bitten by another pup and went tearing off in search of revenge.

I was a bit disconcerted that I’d had such a close encounter with the pup, and I tried to rationalize whether it was worth it to remain at the site. I packed up and left immediately that day, but after some reflection on what had happened, I decided I would continue visiting Waydeep. I was certain I had not played any part in altering the wolf pup’s long-term behaviour and, similarly, I was sure the brief experience had not negatively impacted the pup or made it any more comfortable in my presence. I knew I was probably going to have close encounters from time to time with the wolves and it remained my goal to minimize my impact during those brief meetings.

A few days later, on my return to Waydeep, I again had adults and pups all over the place, but this time in even better locations in terms of photographic opportunities. I had arrived at my vantage point three hours after leaving my house, and planned to stay until just before dusk. Early that afternoon, at a time when we humans think wolves are all off sleeping, a bunch of pups started playing quite close to me. I tried photographing the action through the grass and foliage but did not have much luck until one of the pups walked into a little opening 25 metres away and glanced right at my lens for a glorious second without realizing what it was looking at.

That evening, I had hours of pups and adults directly in front of me on the little bit of ridge that I had a fairly clear view of. I was relieved to see that it was younger adults with the pups, as I was always wary of Hawkeye, Whitey or Mom realizing what the giant glass eyeball meant. In the past, I had sometimes gone as far as removing my camouflaged lens or pointing it down to avoid one of the mature, older adults noticing me. It always meant missing a few shots in the moment, but that was always worth it in the long run.