Three whale species face increasing threats from noise and ship traffic in Canadian waters, according to the Committee on the Status of Endangered Wildlife in Canada (COSEWIC). At its most recent semi-annual meeting, COSEWIC assessed new data on sei, fin and Sowerby’s beaked whales and determined all face some level of conservation risk in the Atlantic and Pacific oceans.

“The sei whales in the Atlantic used to be data deficient, which meant we really didn’t know,” says Hal Whitehead, co-chair of the COSEWIC Marine Mammals Specialist Subcommittee and a biology professor at Dalhousie University in Halifax. “We have enough information now to say these guys should be endangered, too.”

COSEWIC is an independent advisory board that assesses the conservation status of wildlife species in Canada, but species receive no formal protection under SARA until the federal environment minister acts on the committee’s recommendations.

The committee also assessed the fast-swimming fin whales as being of special concern in both Atlantic and Pacific waters, meaning they are at risk of becoming threatened or endangered. In the Pacific, however, this assessment represented an improvement in the whales’ conservation status.

“Fin whales in the Pacific used to be threatened, so we are a bit more optimistic … than we were 10 years ago,” says Whitehead.

John Reynolds, chair of COSEWIC and an aquatic ecology professor at B.C.’s Simon Fraser University, says that while whales are hard to count, researchers have been seeing greater numbers of fin whales in Pacific U.S. waters and hope to see the same in Canadian waters soon.

In the Atlantic, Sowerby’s beaked whales remain of special concern, a status they’ve held since 2006 largely as a result of commercial whaling. These whales often die as a result of beaching. The reason for this is uncertain, but Reynolds says noise from ship traffic could be a factor.

“You combine all the marine traffic with seismic activity [for oil and gas exploration] and it does look like the Atlantic Ocean is getting a lot busier and a lot more noisy,” he says. “I’m not surprised an animal [that] is sensitive to noise is having trouble recovering from a history of whaling.”

Sei, fin, and Sowerby’s beaked whales all evolved in oceans quieter than those today, according to Reynolds.

Sowerby’s beaked whales are especially sensitive to noise pollution, having evolved in deeper waters far from the coast. They use echolocation for daily functions such as hunting, socializing, and navigation. Noise from large ships, naval training operations, and oil and gas exploration disrupt these functions. In recent years, these activities have ramped up in the Atlantic Ocean.

This map shows the density of marine vessel traffic in the North Atlantic for 2016-2017. Map taken from MarineTraffic (www.marinetraffic.com). (Map: CNW Group/Committee on the Status of Endangered Wildlife in Canada)

Whitehead says marine protected areas (MPAs) — offshore or coastal areas set aside specifically for conservation purposes — can provide whales with a refuge from noise pollution, pointing to the Gully MPA off Nova Scotia as an example. It was designated as an MPA in 2004.

“I’ve been working at the Gully for 30 years, and in the first 15 we worked there, we hardly saw [Sowerby’s beaked whales], and if we did, it was a huge event,” says Whitehead. “In the last 15 years, they’ve become pretty common. It’s lovely.”

However, he notes that the increased whale sightings are not necessarily the result of population growth, since the whales don’t give birth that often.

“My thinking is that they range around and are very sensitive to underwater noise … and now that [the Gully’s] grown quieter than other parts of their range, they’ve come there and liked it.”

Whitehead is optimistic that sweeping prohibitions on industrial activity within MPAs announced last month will go a long way toward ensuring these areas fulfill their purpose.

“Trying to give some safe haven not only for whales but also for fish and other marine life is a very good idea indeed.” 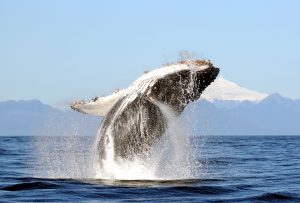