Every week, Stephen Smith and Russell Potter will review the latest episode of the AMC show The Terror for Canadian Geographic. Their take on Episode 8 — “Terror Camp Clear” — appears below.

We open in the calm before the storm: as the show imagines it, Crozier and Fitzjames have decided to walk by themselves to recover, add to and redeposit the infamous “Victory Point” note — the sole surviving official record of the Franklin expedition. It gives our boys a chance, for just a moment, to consider their predicament and ponder how posterity might see them. Fitzjames, his face already marked by scurvy, takes the occasion to make a sort of confession, with Crozier as his priest: that he is of uncertain birth, vain ambition and got his post only by doing a favour to (Admiralty secretary) John Barrow’s son — in short, “I’m a fake, brother.” Crozier, in reply, declares, “I challenge any biographer to tally up your acts of valour, and then call you a fake.” I couldn’t help but think the show is alluding to my late friend William Battersby’s biography James Fitzjames: Mystery Man of the Franklin Expedition, which documents both that vanity and that valour and finds the latter a far greater tally.

But, as they draw near to the camp, the time for reflection is cut short: The marines are running! We realize, even before we’re told, that this is Hickey’s subterfuge, his claiming that it was the Netsilik Inuit who attacked and then mutilated Irving and Farr, after being “informed” of which the other men kill the innocent Inuit (minus one man who escapes on foot). The camp is up in arms, the men pleading to be armed against what they imagine will be a Netsilik counterattack. As if on cue, fog rolls in, a fog both physical and psychological. Crozier and Fitzjames’s cooler heads are not quite enough to prevail, as the frightened sailors arm themselves and man the perimeter, taking every howl of the wind as a sign of an imminent attack. Lady Silence, called to testify, avers that her people do not attack the innocent or mutilate the dead; in search of further proof, Crozier orders Goodsir to cut open Irving’s stomach. And what is in it? “That’s seal meat, sir, barely digested” says Goodsir to Crozier. “They fed him.”

This provokes what may be the show’s most darkly fascinating conflict yet: between Hickey, and those persuaded by his half-truths and innuendo, and Crozier, who must now re-earn the respect of the men. Hickey and Tozer are court-martialled and found guilty, and the ships’ carpenters provide an improvised gallows. Willing hands step forward to pull the rope; these men’s fate seems sealed. And then, Crozier, at the moment of the carrying out of the sentence, makes the kind of mistake good men make about bad ones: he grants Hickey a chance to speak. It’s a moment with a weirdly contemporary feel, with Hickey’s “fake news” cries rekindling the dissent that the captain’s investigation and quick justice had for a time quelled. And of course it’s just then that Tuunbaq appears, though to sow chaos more than take revenge, as Hickey, jogging admirably despite the noose still about his neck, uses the occasion to escape, and more innocents are killed in the creature’s wake.

Setting aside this last development, the episode raises the question of possible mutiny, and its relationship to cannibalism. Thanks to the work of forensic anthropologist Anne Keenleyside, we have scientific corroboration of Inuit testimony that cannibalism occurred, at at least one site, on Erebus Bay on King William Island. Might this have been a party of mutineers? Or could it have been simply one small band of survivors, prompted to the “last resource” (the phrase chosen by Dr. John Rae as the way to describe what his Inuit witnesses had told him when he was searching for Franklin and his men in 1854) only after absolute desperation set in? Without further evidence, we can’t say, though in general “passive” cannibalism — the eating of those already dead of natural causes — is far more common than “active” cannibalism, in which one kills to eat. Sir John Franklin’s land expedition of 1819-22 inevitably comes to mind: for while he, the virtuous commander, patiently awaited starvation back at his makeshift fort, among the rearguard of his scattered party, an Iroquois guide by the name of Michel Terohaute brought “mystery meat” to his companions — meat that turned out to be that of the stragglers. Amazingly, that expedition’s surgeon, Dr. John Richardson, actually partook of this meat at first, before adducing its origin, and eventually administering justice to Michel by summarily shooting him in the head.

Despite all that, it’s my personal view that mutiny was unlikely; the men would surely, so long as hope remained that they could return safely home, have realized that organized parties stood a better chance of success than haphazard, desperate groups. And yet, as the clocks of hunger tick onward, more and more bets are off — what might it take to make one man break, and once broken, recruit another to his number? And thus, what happens with Hickey here, though implausible to my mind in terms of its early appearance, surely represents one possible, plausible endgame for men who could no longer hope on, or hope ever (a line from a popular hymn of the day and the motto displayed on sledge flags on early Franklin searches).

So Stephen, since you’ve retraced Franklin’s men’s footsteps on King William Island, I wanted to ask you: how well do you think the production designers of the show captured the landscape and the feel of that place? And what role, for that matter, would you say the land itself plays in the last, desperate drama of these men?

The wind blew at us constantly up on King William, and with our imaginations acting on all that we’d read about Franklin and his men, it made a mournful companion. With the island’s bleak distances and the shifting limestone shale, hiking its coasts is a challenge even if you’re not stranded there in 1848, frantically trying to survive.

So I’d say that The Terror’s production designers have hit their marks perfectly in transforming the Croatian island of Pag into the final, forlorn stage for our story.

The trek I joined in the summer of 2007 to King William didn’t go as planned. We were well-geared and plentifully supplied, hauling satellite phones and emergency beacons. Five of us were trying to get to Victory Point, where the survivors have now come ashore in our story, making their camp in preparation for the journey south. From Gjoa Haven on the east coast, we were travelling north on ATVs — until we weren’t. A helicopter we did our best to hire didn’t materialize. Finally, the late, great Louie Kamookak gathered us up and took us in his boat to the Franklin expedition graves on the Todd Islands, and from there on down the Simpson Strait to Tulloch Point.

When he’d landed us there, Louie fed us on char he’d caught before leaving us to hike west into the dirgelike wind. In the end, we only got as far as Cape Herschel, a long 100 kilometres or so from the destination we’d hoped to reach.

Still, it’s a journey I’ll never forget. I don’t know that you can walk those shores and not feel the weight of what happened thereabout to Franklin and his men. History has made King William a solemn place. In casting it as a terrifying trap where the only certainty for wandering non-locals seems to be that things are imminently going to get worse, AMC has now haunted it for me, retrospectively.

And yet for all the facts and fictions that shroud King William, I won’t forget just how beautiful it was that August, its endless views of sea and sky, and how alive. Inland, we marched through meadowlands and marshes, crossed streams, skirted lakes. Often when we paused to tend blisters I’d unpack E.C. Pielou’s A Naturalist’s Guide To The Arctic (1994) to read up on the moss-campion and scurvy grass underfoot, the colourful saxifrages and lichens. (Pressed between pages when I opened it just now I discovered a stem of Arctic cotton.) We encountered tumults of snow geese that wouldn’t (or couldn’t) take flight, and fled noisily north on foot. We saw hare, a white wolf, and, one memorable evening, a phalanx of muskox. We had a meagre armoury of our own — guns and bear-bangers — in case of polar bears that never appeared.

I liked the prologue this week, with poor desperate Fitzjames baring all and Crozier meeting his confession with kindness and a pledge of friendship. But, as ever, the rest for the good guys is equal to that parceled out to the wicked, which is to say: zero.

Wicked-wise, Cornelius Hickey’s devilry is in full fledge. He’s as separated, now, from reality as Collins dosed up on Peruvian, if not so harmless. With Sergeant Tozer and his willingness to seize the arsenal working to his plan, Hickey doesn’t seem fazed one bit by his captain’s doubt and quick detective work. Impending execution is a minor detail for the expedition’s leading sociopath — Hickey never doubts that he can talk his way out of the noose. He’s so very sure of himself that — no, he couldn’t possibly have some kind of rapport with Tuunbaq, could he?

“No one is coming for us,” Crozier tells the men, just before the situation deteriorates (again). “We must get ourselves out.” In the fog, with fear taking full command as the monster runs riot, the men scatter and die. I don’t know about those who remain loyal, but in the hazy chaos, the mutineers still seem to be able to imagine a scenario whereby they escape the miseries of King William. How long will that hope survive?

Russell and Stephen’s recap of Episode 9 of The Terror will be published on May 14.

Catch up on past episodes of The Terror 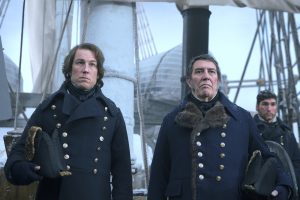 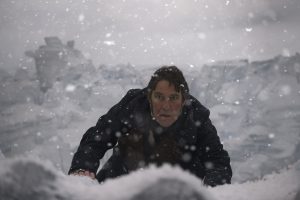 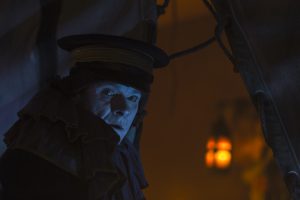 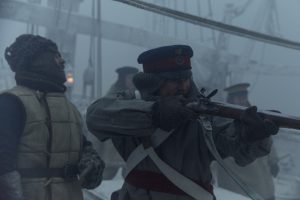