The hunt for the Franklin ships: drift theories

DURING THE THE 1850s, various independent observers reported seeing a pair of vessels similar in size and shape to the Erebus and Terror trapped on drifting ice floes in Baffin Bay, far from the point of abandonment. Franklin expert Russell Potter, professor of English and media studies at Rhode Island College, says it is “not possible to definitely rule out” this explanation for the fate of the ships.

Rear Admiral Noel Wright, a British navy historian and author, wrote in 1959 that “two ships came out of the Arctic all by themselves. They were sighted in April 1851, on an immense ice-floe off the Newfoundland Banks.”

On April 17, 1851, Wright explained, sailors and passengers on a brig travelling to Quebec described seeing two ships, one high up on the ice floe and the other on its side. Both were broad, and matched the black-andwhite colour scheme of the Franklin ships.

Other beset ships, Wright observed, had drifted north out of the central Arctic Archipelago, as a result of periodic “clearances” in the ice, coupled with southerly winds. The best known was the HMS Resolute, one of the original ships dispatched to search for the Franklin Expedition. Beset north of Victoria Island in August 1853 and abandoned the following spring, the Resolute was found by a whaling ship in 1855, drifting in an ice floe near Baffin Island, some 1,900 kilometres to the east.

Richard Cyriax, who wrote the most authoritative history of the Franklin expedition in 1939, related another account suggesting that one of the ships may have drifted a considerable distance — in this case, south along the west side of King William Island, and then north toward Matty Island. The third-hand story originates in 1855, when Hudson’s Bay Company searchers spotted two masts on a ship near the east end of Simpson Strait. Wrote Cyriax, “The probability is that the masts (if any) belonged to a ship, presumably either the second Franklin ship, or the one which seems to have sunk near O’Reilly Island, and in that case must have drifted into Simpson Strait and back again before foundering.”

More recently, Cyriax continued, Maj. L.T. Burwash, of the Canadian Department of the Interior, “was told by some Boothian Eskimos [sic] … that after the ice broke in the summer, a ship could be seen lying under water in James Ross Strait. These Eskimos said that they did not know where this ship had come from, but that for many years they had found pieces of wood and iron washed up by the sea on the east coast of King William Land and on Matty Island.”

In April 1929, two elderly Inuit men told Burwash that years earlier, they found a cache of wooden cases, tins and planks, on a low, flat island northeast of Matty Island. “They claimed that the submerged wreck lay about three-quarters of a mile off this island. Burwash would argue that this ship is one of Franklin’s vessels.”

A year later, however, Burwash flew over the area to see if he could visually locate the wrecks. But ice obstructed his view of the ocean floor. While Cyriax felt it was improbable that that ship is either the Terror or the Erebus, contemporary search efforts have not explored the area around Matty Island. 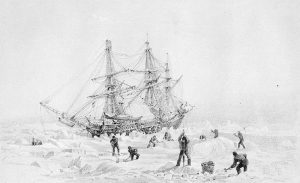