She didn’t choose forestry as a profession because she thought it would lead to her meeting a Prince. But that’s the way things turned out.

Jocelin Teron, the inaugural winner of the Prince of Wales Award for Sustainable Forestry, will be leaving British Columbia’s forests behind to meet Prince Charles in Charlottetown next Tuesday.

Initially, Teron didn’t think about applying for the award until her boss said he would nominate her. “I was humbled by it,” she says.

Matthew Rowe, manager of operations and partnerships from the Prince’s Charities Canada, says Teron checks all the boxes. “She’s young, already has a record of being involved in promoting sustainability and has her entire career ahead of her in the industry.”

Teron, who went camping around London, Ont. as she was growing up, says she always knew she wanted to work outside. In high school, she stumbled into a forestry presentation at Lakehead University. “I hadn’t thought of forestry before, and it wasn’t something I knew anything about having grown up in southern Ontario.” After starting her degree, she volunteered to speak at schools to educate people about sustainable forestry and debunk myths around the industry.

After graduating, Teron moved to Campbell River, B.C. to start her new job ensuring the replanting of harvested forests are properly managed. “We basically take care of the areas until they reach free-growing—the point where there is no more competing vegetation and the trees are free to continue growing into a new stand.”

Teron says the award, a cup carved from a harvested oak found on Duchy lands in the United Kingdom, sits on her mantle at home. But it will be making the trip with her to the Maritimes to meet Prince Charles.

Meet the winners of the 2017 Nature Inspiration Awards 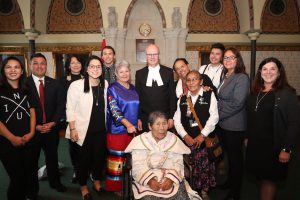 Meet the winners of the 2019 Indspire Awards

Twelve Indigenous people honoured for their extraordinary work across Canada