The 20th century saw Canadian women make great strides towards political equality, but they had an enormously important role in shaping other facets of Canadian life.

We dug through nine decades of the archives of Canadian Geographic magazine to see how women were represented in its pages. The women we uncovered may not be household names, but each of their stories represents a unique snapshot of life in Canada.

An article by Lady Kitty Ritson titled “In A Metagama Shack” appeared in the very first issue of the Canadian Geographical Journal, published in May 1930. In it, Ritson wrote humourously about her time in northern Ontario with a friend, Eira Wigan.

Wigan was apparently disappointed by the relative tameness of their surroundings, “for she had expected to be assailed by hordes of timber wolves and to hear moose crashing their antlers against the door,” Ritson mused.

At the very least, the trip produced the epic photograph at right, showing Lady Ritson looking stylish and confident in the winter wilderness.

Left: A woman stands with a 500-pound aerial bomb, manufactured in Canada during WWII. Above and below right: Women inspect 7.2 shells in a munitions plant in Quebec. (Photos: Canadian Geographic archives)

In the July 1942 issue of the Canadian Geographical Journal, E.J. Brunning, Director General of Munitions for the Department of Munitions and Supply, provided an inside look at Canada’s effort to arm the Allied troops in the Second World War — an effort in which women played a vital role.

Brunning acknowledged that “A growing force of women and girls has been trained to unfamiliar tasks,” and expressed that Canadians could be proud of “what several hundred Canadian plants employing upwards of 50,000 men and women are doing to keep loaded guns pointed at the enemy.”

“It is the story of achievement,” he concluded.

Women in Harrington Harbour, Que. hooking rugs to be sold across Canada. The rugs usually featured scenes of typical northern coastal life, such as sled dogs and fishermen. In the background of the photo on the right can be seen a rug with seagulls flying in a “V for Victory” pattern. (Photos: Canadian Geographic archives)

In 1958, readers of the Canadian Geographical Journal were introduced to the women of Harrington Harbour on the Quebec coast of Labrador, who practiced the traditional art of rug hooking. The rugs, which featured unique facets of northern coastal life such as sled dogs, puffins and fishing villages, were not just a pastime for the women of Harrington, but a source of income.

Through the work of the Grenfell Mission, which distributed the rugs for sale across Canada, the craftswomen found a way to support their families in precarious times and a wider audience for their art.

The profile of Samson Koeenagnak that appeared in the March 1967 issue of Canadian Geographic is a fascinating read. Koeenagnak, his wife Elizabeth Arnajarnerk and their three sons lived in almost total isolation in the Barren Land north of the treeline and west of Hudson Bay — so-called after it was largely abandoned due to dwindling caribou populations.

Settlement life in Baker Lake did not appeal to the couple, so after the birth of their son Kabloona in 1958, the family moved back to the barrens to lead a semi-nomadic lifestyle.
Arnajarnerk’s daily responsibilities included washing, sewing and cooking, while Koeenagnak hunted caribou, fished and took care of camp and canoe repairs.

“Between their work,” noted author Fred Bruemmer, “both parents played for hours with their children.”

Advertisement
Left: Dancers wait to compete at the Antigonish Highland Games. Right: 18-year-old Fiona Nettleton of Arichat, N.S. demonstrates the art of sheep shearing at the International Gathering of the Clans. Nettleton was able to shear 13 sheep in an hour. (Photos: Canadian Geographic archives)

By the late 1970s, colour photographs more frequently graced the pages of Canadian Geographic. An eye-catching photo essay in the October/November 1979 issue looked at the various ways the Scots of Nova Scotia keep their heritage alive.

That year, an International Gathering of the Clans was held in Halifax in conjunction with annual cultural festivities across the province, like the Antigonish Highland Games.

The swift fox, a cat-sized cousin of the red fox, was not spotted in Canada for 50 years and was considered endangered — that is, until a dedicated group of naturalists undertook a project to breed them in captivity and return them to the wild. Among them: biologist Jo-Anne Reynolds of the Canadian Wildlife Service.

It was the first time scientists had ever attempted to re-establish a carnivore in North America and it’s been tough-going. Though small populations of swift foxes now exist in the wild in Alberta and Saskatchewan, as of 1999 the Species At Risk Act still lists them as endangered within Canada.

January/February 1999: Up and Running

In the last year of the 20th century, Canada gained a new northern territory: Nunavut. While Canadian Geographic‘s story focused on the challenges inherent in uniting 28 diverse communities across one-fifth of Canada’s landmass, the title photo expressed more exuberance and optimism. The creation of Nunavut represented the successful conclusion of a 28-year journey towards Inuit self-determination in Canada.

By the mid 2000s, Canadians were coming to have a better understanding of the Nunavummiut. This was especially true in the Vanier neighbourhood of Ottawa, traditionally a French quarter but also home to the largest Inuit community in southern Canada at the time.

About 22 students per year were chosen for the eight- to nine-month program. While in Ottawa, they would become ambassadors for Nunavut, performing traditional dances, songs and games throughout the capital region.

October 2011: Making Up the Mosaic

Women in the crowd at a Canada Day celebration reflect the changing face of Canada. (Photo: Renaud Philippe/Canadian Geographic archives)

This photo appeared alongside a column by Daniel Poliquin, who argued that far from ushering in the total decimation of the French language in Canada, immigration has “given birth to a unique phenomenon: newcomers joining the linguistic minority instead of folding into the mainstream.”

Poliquin noted that “forecasts of misery” have accompanied every attempt to foster an inclusive, multicultural society in Canada, but that time has proven that the definition of what it means to be Canadian is flexible.

As the human landscape of Canada continues to shift and change, we’re excited to see what stories we’ll tell about women in the years to come. 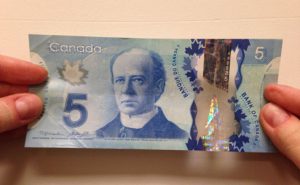 Q&A with Merna Forster about women on Canadian banknotes