In the first week of cleanup activities, more than 26 tons of marine debris was pulled from the ocean

With small ship tourism — cruises of less than 40 people — effectively halted due to the COVID-19 pandemic, Maple Leaf Adventures saw an opportunity to both stay in business and help clean up the ocean at the same time — using their usual tourism vessels, they embarked on a cleanup mission along the B.C. coast.

On Aug. 18, with funding from the Marine Debris Removal Initiative and approvals from Indigenous governments in the area, a fleet of seven Canadian-owned small tourism ships set off for six weeks along the coastline, aiming to pull up to 100 tons of marine debris from the water, from single-use plastics to “ghost” fishing nets. Focused on the coasts of the Great Bear Rainforest, these smaller ships can go where it’s difficult for anyone else to go — few roads, difficult helicopter landing spots and a coastline dotted with reefs mean it’s a challenge to reach the shoreline for most people or vehicles.

“When it became clear we would not be able to operate under normal circumstances this summer and had to cancel a sold-out season, we turned our attention to the environment to give back to the coast that sustains us,” says Kevin Smith, CEO of Maple Leaf Adventures and co-lead on the project with Russell Markel of Outer Shores Expeditions. “We dreamed up an initiative for which there weren’t yet any dedicated resources.”

A number of scientists are also on the crew, which will allow for data collection about the debris, to be provided to the Ministry of Environment & Climate Change Strategy. The project is being coordinated by the Wilderness Tourism Association of B.C. 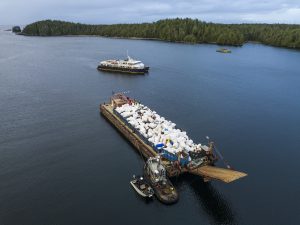 RCGS Fellow Jacqueline Windh jumped at the opportunity to participate in a six-week cleanup along the coast of B.C. 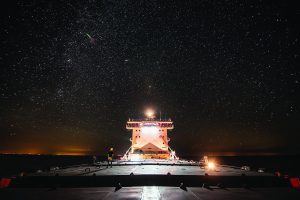 Titans of the Great Lakes

It’s a multi-billion-dollar business that most of us never get to see. A glimpse into what life is like aboard the freighters that ply the Great Lakes.