Author Kenn Harper pays tribute to the life, legacy and work of his fellow historian
By Kenn Harper
Advertisement

Louie Kamookak was a national treasure. As Canada’s leading Inuit oral historian, he worked at the intersection of Inuit traditional knowledge and the more formal disciplines of anthropology and history. He took an interest in the things of the past at a time when few in or outside his small community of Gjoa Haven were interested in such esoteric pursuits.

It was a grave that his father showed him that launched Louie, as a child, on his adventure into what scientists today would call forensic anthropology. Father and son visited the grave of an early fur trader variously called “Russian Mike” or “Siberian Mike.” Mike was said to have died of suicide but Louie noted inconsistencies in the story — in particular, the bullet that killed him appeared to have entered from the top of the skull. Over the years, Louie thought a lot about the legendary trader and his unusual death, one of many northern mysteries never solved.

In time, other stories led Louie farther back into the tales of his homeland, local lore about cultural contact over a century ago. Eventually he realized that some of the stories merged. They could not all be accepted at face value, but needed the type of analysis that Louie, with his knowledge of two cultures, could provide. “The oral tradition tells a lot of history, but isn’t always very accurate,” Louie once said. He brought this caution to the stories he heard the elders tell of qallunaat —white men — pulling a large boat on a sled, and of men scattering in different directions and perishing. This was, he eventually realized, a melding of the stories of an expedition on the Boothia Peninsula led by John Ross, and the final desperate marches of the men of the Franklin expedition.

Louie determined that he would try to separate the wheat from the chaff, to interpret the stories of his people into a cohesive narrative, at the same time explaining the misconceptions and outright errors that had found their way into print in explorers’ narratives and modern qallunaat retellings of those journeys.

It was a daunting task, but Louie had the inspiration of his great-grandmother to draw on. Long ago, while walking over the crest of a gravel ridge, she had found metal spoons and forks, tangible artifacts left behind by those same desperate white men whose stories would fascinate Louie.

He listened to his elders, his ancestors, and in time — and with the unstinting support of his wife Josephine — interviewed more than 20 local Inuit over three decades in his home community of Gjoa Haven on the southern coast of King William Island. It is ironic that this community, one of the most isolated in the Canadian Arctic, is so steeped in cross-cultural history. Its very name is taken from that of the Norwegian, Roald Amundsen’s, small ship which found a safe harbour there in 1903. A half-century earlier, Franklin’s expedition, in search of a Northwest Passage, had come to grief in the ice-choked waters off the island’s west coast, with the loss of over 100 men. As a boy, Louie went to school in the community, and heard white teachers tell the bits and pieces they knew of the Franklin story. “The stories the teachers told us matched the ones that my great-grandmother told me,” Louie recalled a few years ago. “I could tell they were talking about the same people.” A seed had been planted.

Louie came to the Franklin story with a respect for the non-Inuit who had broken ground before him in exploring this most enduring of all Arctic mysteries. Perhaps that’s because his grandfather was a white man, William (“Paddy”) Gibson, a trader and manager for the Hudson’s Bay Company, but also, as an avocation, a dedicated Franklin researcher who had published a number of articles on the subject. Louie acquired those articles and continued the research of the grandfather he had never known.

Another explorer also showed him the way. Knud Rasmussen, an ethnographer of Danish and Greenlandic ethnicity, travelled through the area in the 1920s on the Fifth Thule Expedition, and talked to Inuit about all aspects of their traditions. Rasmussen became one of Louie’s heroes for the simple reason that he listened to Inuit and wrote down what he learned from them.

Inuit ancestors were vindicated in 2014 when divers from Parks Canada located Franklin’s ship, the Erebus, pretty much where Inuit had always said it would be found. The veracity of their tales was reaffirmed two years later when the other ship, the Terror, was also found; it too was where Inuit had expected it to be.

The finding of the ships did not end Louie’s romance with the Franklin story. Franklin’s resting place has never been found. Many believe that the explorer was buried on land. Louie thinks the location is somewhere near Cape Felix on King William Island’s uninhabited west coast.

But Louie’s journey has now ended. Finding Franklin now remains a search to be conducted by other researchers. One hopes that other Inuit will take up Louie’s torch and continue his quest. 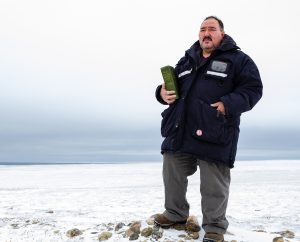 A tribute to the acclaimed oral history expert and RCGS Honorary Vice-President, who passed away this morning 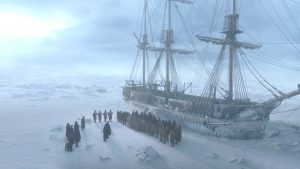