A 1974 discovery is officially giving the Canadian Fossil Discovery Centre (CFDC) in Manitoba bragging rights as hosts of Bruce, the largest mosasaur in the world, as it entered Guinness World Records late in August of this year.

“Bruce is unlike anything you’ve ever seen,” said Peter Cantelon, the executive director at CFDC.

The mosasaur, which is an extinct large marine reptile from the Cretaceous period, about 80 million years ago, was discovered northwest of Morden, Manitoba in an escarpment near a farmer’s field, when his cow stepped on the jawbone, propping it up and out.

It took experts two to three seasons just to extricate Bruce from the field, said Cantelon. And being big fans of comedian group Monty Python, named him after a popular sketch in which all the characters are called Bruce.

Bruce is just over 13 metres in length. The second largest is Bunker in Kansas, stretching just under 12 metres.

“It’s very difficult to describe because ancient marine reptiles like Bruce don’t get nearly as much airplay in pop culture as say a T-Rex or Velociraptor,” said Cantelon, noting the mosasaur is just as frightening, if not more.

To add to the fearsome appearance, mosasaurs have a fluke at the back end of their tail that surfaces just like a shark. But with Bruce, by the time you saw it, if it were 13 metres away, the mouth would be right there in front of you.

“The whole thing is just a nightmarish eating machine. It’s the most impressive thing I’ve ever seen,” he said. Next to Bruce is a replica of a T-Rex skull to show people the comparison. Bruce is not only larger than T-Rex but also has more teeth.

Visitors have increased and Cantelon says the response has been phenomenal. “We’ve had so many people come through our doors the last little while who realized the significance of what’s being held here in Manitoba,” he said. For him, Bruce also serves the purpose of educating people on Manitoba’s richness of fossils from the era.

The CFDC houses the largest collection of marine reptiles in the country. Open all-year round, they also offer visitors the opportunity to go out on fossil digs. 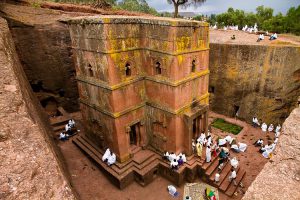