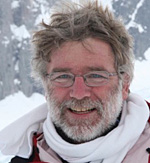 James Raffan has had a lifelong love affair with the North, but the accomplished author of books such as Emperor of the North, about the Hudson’s Bay Company, covers fascinating new ground in his latest work, Circling the Midnight Sun: Culture and Change in the Invisible Arctic, an edited excerpt from which appears below.

Patience rewards. Two walruses were resting on a big rock on the shore. Two fast shots. And suddenly our kayaking back- haul to Repulse Bay had become a community hunting trip. In no time at all, with many hands pitching in, the animals were expertly butchered, the meat and blubber plopped onto blue Fabrene tarps in the boats, and we were back on our way, surrounded by happy hunters and the pungent smell of fresh blood and walrus. No sooner had we pulled up on the beach, unlashed our kayaks, and retrieved our gear than the proceeds of the hunt were leaving the beach in cardboard boxes on the back racks of a small herd of ATVs headed for houses all over town.

Like all but one of the 25 communities in three time zones across Nunavut, Repulse Bay is a coastal community. Ongoing connection and activity on the sea in summer and on the sea ice in winter were indicated by a scattering of boats, komatiks, snow machines, sheds, and other hunting paraphernalia along shore. As in the rest of Nunavut, half the population of about 1,000 was under 20. This fact was most evident when visitors arrived by land or sea because it was the children, on their bikes and running along in ones and twos, who were the welcoming committee. After weeks of solitude and a few hours of travel on the open sea, where conversation was not possible because of the roar of the outboards and the wind, we were surrounded by pint-sized ball caps, T-shirts, and questions flying everywhere.

You would never know by their toothy smiles and innocence that these children lived in the most difficult circumstances of young people anywhere in the world —seven out of 10 of them lived in houses without adequate food, fewer than one in 10 would graduate from high school, and if they did finish high school and stay in town, they’d have to deal with the fact that only four in 10 adults actually had jobs.

Ten out of 10 residents had already coped with the effects of alcohol and drug abuse and rates of family violence and violent crime that had affected each one of them directly — although Repulse stands out among Nunavut communities as one of the few places with a crime rate low enough to approach the national average. And they had to know and be affected by the fact that when they became teenagers, especially the boys, they would be 40 times more likely to take their own lives than their counterparts in southern Canada.

Nunavut is Canada’s newest territory and the circumpolar world’s grandest social experiment yet in self-government initiatives. It began with the splitting of the Northwest Territories in two and the signing of the Nunavut Land Claims Agreement on July 9, 1993, which made the twenty-seven thousand Inuit of the central and eastern Arctic the largest private landowners in Canada. It was the largest Aboriginal land claim settlement in Canadian history, involving transfer of title to Inuit ownership of 350,000 square kilometres, of which 35,000 square kilometres included mineral rights (the total land area of Nunavut is 1.9 million square kilometres). The settlement also included a wide variety of provisions for transferring and devolving a host of responsibilities from the federal and territorial governments to the Inuit themselves. Parallel legislation that came into force on April 1, 1999, provided for the creation of a new territory with a public government, called Nunavut, that would serve all residents, 80 percent of whom were Inuit.

The Nunavut land claim settlement also involved the transfer of $1.15 billion over fourteen years, which sounded like a lot— but the annual budget of Nunavut for 2013–14 was $1.7 billion, and 82 percent of that ($39,373 per capita) came in federal transfer payments. On just about every measure of success and social satisfaction — education, general health, life expectancy, substance abuse, employment, income, and housing — Nunavut was still at the bottom of the heap in Canada.

In the heady years between the signing of the land claim and the creation of Nunavut, there was hope in Repulse that the creation of a new national park around Wager Bay — Ukkusiksalik was one of four parks written into the land claim agreement — would be an economic driver for the community. Indeed, when I first went to Wager Bay, it was with the two Inuit businessmen from Rankin Inlet who were in the process of establishing Sila Lodge. The lodge did reasonably well for a decade or so but eventually collapsed due to “high operational costs.”

The park is rich in wildlife and spectacular scenery. But because of the still high incidence of polar bears (park literature recommended “hard-sided accommodations” for visitors, if one could imagine a kayaker pulling such a thing out of a waterproof hatch), the remoteness of the location, and the lack of infra- structural support, the park had not lived up to expectations, not so much in its mandate to protect important natural and cultural resources but as a source of tourism dollars on which to build the local economy. There was a park office in town that got the odd project going, providing various types of short- and long-term employment, but the dream that the park would one day be an economic boon for Repulse Bay had yet to be realized.

There was potential for new mines in the area to become part of the Repulse economy, but there too problems arose. Gold and diamonds have both been found in commercially viable deposits. Meadowbank, the first of several potential gold mines nearby, opened in June 2010. But in April 2012, Denis Gourde, general manager of Meadowbank, told the Nunavut Mining Symposium in Iqaluit that his most persistent problems in making it profit- able were absenteeism and high turnover within the Inuit work- force. “We have an average of twenty-two missing, not for the first half hour, but for the full day, twenty-two missing people. You can imagine the financial burden on the operation when you have that much absenteeism.” Apparently, it is an almost impossibly long way from walrus hunting to wage work following the tick-tock of a southern clock.

For the last of the elders in Repulse and the other Nunavut communities — who in 70 or 80 years have gone from chatting among family in the star-spattered silence of the barrens to having satellite TV and Internet bombard their “hard-sided accommodations” with news and weather from around the world — the relocation from the land, residential schools, and the forced rethinking of the whole idea of economy and employment were things that, for better or worse, had been taken in stride. But life was accelerating. As elders took with them to icy graves Inuktitut words that would never again be spoken and as young people, in disturbingly unacceptable numbers, took with them to their early graves the promise of the future, life in the rest of the world went merrily on.