Users can learn about the Indigenous territories, languages and treaties of the cities they live in with just a few clicks
By Kiley Bell
Advertisement

The land you’re standing on is likely not yours to claim. That’s what Victor Temprano, a Vancouver-based web developer, set out to explain through the creation of an interactive online map of traditional Indigenous lands. The mapping website, Native-Land.ca, and its complementary app highlight the territories, languages and treaties of Indigenous Peoples across multiple countries including Canada, the United States, Mexico and Australia.

Although the map began as a hobby three years ago, Temprano was clear about the purpose of his map from the start. “I wanted to make something to reach out to non-Indigenous people like myself,” he explains in his blog. “Something that would engage them with Indigenous history in a friendly and interesting way.”

As an interactive feature, map users can type their postal code or city name into the location search bar to be immediately provided with information about the traditional Indigenous land on which they stand. In Canada, this includes a list of First Nations, Métis and Inuit territories, as well as land claim agreements, historic and modern-day treaties and language groups — information that many Canadians may not already know. “Indigenous people already know their territory; it’s the ‘settlers’ who need to have a look at the information I am collecting,” says Temprano. “I want people to have Indigenous names and lands in mind as they go about their days.”

Including himself in the “settler” category, Temprano wants to keep an open dialogue about his ongoing mapping project to ensure he has the most accurate data from the people whose voices matter most. “Native Land should be run and overseen by Indigenous people, not me,” says Temprano. “Maps potentially function as colonial artifacts and represent a very particular way of seeing the world — a way primarily concerned with ownership, exclusivity and power relation.”

Having been recently inundated with mapping requests and inquiries from experts, professors and members of Indigenous communities, Temprano understands his map is a work in progress whose ultimate completion can’t be achieved alone. “I have no desire to be the only arbiter of how this project is mapped and what is respectful,” says Temprano. “But maybe together we can do something better.” 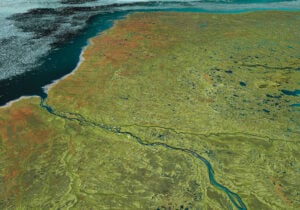