In their own words: an interactive map shares the stories of Sixties Scoop survivors

It started out with a drawing on a piece of paper. Almost three years ago, Sixties Scoop survivor Colleen Hele-Cardinal spoke with Canadian Geographic about her dream of creating a map that would document the individual displacement stories of the Indigenous children taken from their families in the mid-20th century. Beginning in the late 1950s,  some 20,000 children were removed from their homes and placed with families in other parts of Canada, the U.S, Europe, and other places further afield. Hele-Cardinal, along with her two sisters, was one of these children, taken from Saddle Lake Cree Nation and raised in an abusive home in Ontario.

The interactive map, championed by Raven Sinclair, a professor of social work at the University of Regina, and coded by Jon Corbett and Nick Black of UBC Okanagan, was years in the making. Now, it’s finally out in the world, and Hele-Cardinal is hoping its reach will be global.

“I’m excited,” she says of the map’s recent launch. “There’s definitely some interest. People are just shocked that we were taken overseas and so far away.”

On the map, a web of lines, colour-coded by province of origin, criss-crosses the globe, showing how far away adoptees were taken from their homes and their culture. The arrows stretch out as far away as New Zealand, Botswana and India. Hele-Cardinal says she was shocked  when she herself began learning about the extent of the Sixties Scoop around 20 years ago.

“You want to believe it but then it’s not until you actually meet somebody who’s been taken there, and you hear their story and what they went through, that you’re like, ‘Oh my God. I thought I had it bad,’” she says. “I mean, their whole identity has been altered.”

Adds Hele-Cardinal with a sigh, “It’s all a bit overwhelming to know that this happened to so many people and not very many people know about it.”

She’s hoping that her map will help to change that. But the map isn’t just an educational tool; it’s also an outlet for survivors to tell their own stories in their own words.

“A lot of survivors want to tell their stories,” says Hele-Cardinal, “and not everybody can write a book. Not everybody actually knows how to tell a story. Some people are better at showing their art.”

Survivors can input their information into the map in whichever format they wish, adding text, photos, a short video, or a link to their website. There’s also an option to indicate that a survivor is looking for their family. In this way, the project will be survivor-led. Reading stories from other adoptees can help build community, says Hele-Cardinal.

“We kind of look for other folks that are like us and when we find each other, we kind of hold on to each other.”

It’s a common story for Hele-Cardinal to hear, and she wants other survivors to know that they’re not alone.

“We’re unraveling that colonial history and we’re like, ‘whoa, wait a second. A lot of the stuff that happened to me, isn’t my fault. And it’s not my parents fault either’. So, you know, it’s changing that dialogue.”

Hele-Cardinal also hopes that some of these conversations will help shift the national dialogue, both on the trauma of the Sixties Scoop and on Missing and Murdered Indigenous Women, Girls and Two-Spirit, especially given that the displacement from their communities has made many survivors vulnerable to violence. Hele-Cardinal’s older sister was killed in 1990, a year after they found their family.

“She was a fighter and she was very vocal. I definitely feel like she is a source of inspiration for me and a source of strength when it comes to why I keep doing this work,” says Hele-Cardinal. “She’d be very proud of me for bringing attention to this.”

Hele-Cardinal hopes that the map’s reach will be greater than just Canada.

“My goal is to have it go global so that people know about it and they’re saying, ‘Hey, wait a second, Canada, you aren’t the greatest country! You did some awful things!’”

The next stage of the map will require raising funds so that the Sixties Scoop Network can run hands-on workshops in select cities around the world where they know adoptees were taken and may still live. The network started as a gathering of survivors in 2014, organised by Hele-Cardinal, which has grown into a community that runs cultural workshops, ceremonies, entertainment evenings, and has made for long-lasting friendships. If they raise enough money, Hele-Cardinal is hoping they can build an app.

“This project could be so much more than just a map,” says Hele-Cardinal. “It’s a storytelling tool, it’s a search tool and it’s an education tool.”

You can make a donation to the Sixties Scoop Network to help them carry on their work by clicking here, by making out a cheque to the National Indigenous Survivors Child Welfare Network, or making an electronic money transfer to [email protected] 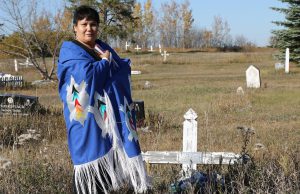