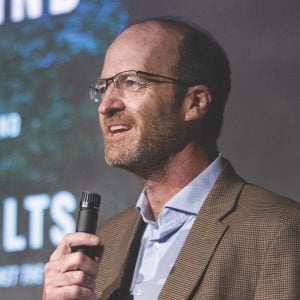 Kimberly Murray is seeking justice, healing and the return of land to Indigenous communities. Her new job — as the independent special interlocutor for missing children and unmarked graves and burial sites associated with Indian residential schools — involves working with survivors and communities to recover burials of missing children and exploring how to hold governments, churches and individuals accountable. Murray, a member of the Kanesatake Mohawk Nation, is drawing on her experience as Ontario’s first assistant deputy attorney general for Indigenous justice and her former role with the Truth and Reconciliation Commission. Here, she discusses her mandates.

On the burials at the former Kamloops Indian Residential School

In Tk’emlúps te Secwépemc [the unceded ancestral lands of the Secwépemc Nation, where the Kamloops Indian Residential School was located], when they announced the recovery of the 215 potential burials of children, it really put the spotlight on the concerns that survivors and communities have been raising for decades. It’s important for Canadians to understand that prior to Tk’emlúps, there had been recoveries of burials all over the country at former Indian residential schools, Indian hospitals and other institutions. But Tk’emlúps really grabbed the attention and the hearts of Canadians and the world. Approximately 80 communities have now started to do the work of recovery with funding from Canada.

My role is to have conversations with survivors and leadership around the important work of recovering the children — and how I can help remove some of the barriers to that. It’s about listening to communities and the challenges they’ve faced for decades in trying to recover the children that went missing. The other big part of my mandate is the concept of “land back.” Canada expropriated a lot of land to give to churches, residential schools [and other institutions]. Part of my job is to determine if there’s a mechanism for Canada to purchase these lands to give back to First Nations communities, so they can properly protect those grounds in their own ways.

One part of justice is legislation; we have no laws to protect these [burial] grounds. We have no laws to support communities in accessing grounds that are potentially privately owned now. Broader than that, what does justice mean for survivors and communities that have missing children and unmarked burials in their territories? Nobody’s been charged with murder. Nobody’s been criminally charged with negligence for not taking care of these children. And so survivors and communities are asking how we can hold Canada to account, how we can hold the churches to account. Investigating genocide is very different than investigating a criminal code crime. We do not have the expertise right now to investigate genocide in this country.

On the justice system’s failings

Police services don’t have the expertise to do these investigations. And, meaning no disrespect to the officers on the ground, there’s a question of trust. The RCMP apprehended the children and took them to the institutions. They were hired to return the kids when they ran away from these places. And they conducted failed investigations when parents came forward saying bad things were happening at the schools. And it wasn’t just the RCMP, it was the Ontario Provincial Police, the Quebec provincial police, the former British Columbia provincial police, the municipal police services. There’s report after report that says our criminal justice system has failed Indigenous people. And so my mandate also directs me to look at Indigenous law and how we can incorporate Indigenous law into finding solutions.

There’s still denial among many Canadians [about how these children died], as if we all were dying of disease in those times. This is different. The rate of death was exceedingly higher for Indigenous children in residential schools than anywhere else in the country. We forced these children to be in these institutions, and then we underfunded them, creating scenarios where disease was prevalent, which caused them to die. We didn’t take them to get proper medical care. When we did send them to hospitals, we sent them to underfunded Indian hospitals. The Truth and Reconciliation Commission gathered testimony from survivors who speak about seeing murders. They speak about people being beaten to death. And when you hear the stories from 7,000 survivors, that’s a very important question for communities: How did these children die?

On her own ties to residential schools

I’m Mohawk and a member of the Kanesatake, the Mohawk community on Lake of Two Mountains outside of Montreal, which is unfortunately mostly known as Oka, and my grandfather was actually taken by the Jesuits. He wasn’t taken to an Indian residential school, he was taken to an orphanage, and had a very similar experience in that regard with abuse. My partner, who’s now deceased, his father is a residential school survivor from Shingwauk Indian Residential School [in Sault Ste. Marie, Ont.], and speaks of his experience running away. It’s actually quite a story, but it’s his story to share.

I can remember my first time seeing a church official. I was hired as executive director for the Truth and Reconciliation Commission, and the officials walked into the room wearing the black robes all the way down to the ground, with the big cross in front. And I just had this feeling of shock, fear, a kind of sickness in my stomach. It was coming from what I knew about what happened to my grandfather. But over the five years of working with the TRC,  I learned to get beyond the robe and actually have the conversations with the individuals wearing them. But it took me aback. And I can only imagine how survivors feel when they see when they see that.

On recovery work at the Mohawk Institute Residential School

I’ll leave it to the current Survivors Secretariat to update the public on where things are at with their search of Mohawk Institute Residential School. But [when I worked at the secretariat], the survivors started a ground-penetrating radar search. They purchased three machines. There’s over 600 acres of land to search. They have multiple teams that have been trained, and that’s quite unique that Six Nations has been training their own people to operate these machines. They’re not relying on outside companies to come in. So it’s really community-led and involved, and those searches continue to happen. What I’m learning very quickly in my new role, and what I learned working at the Mohawk Institute, is that there is a massive backlog right now in analyzing data from radar. There’s just so few people that have the expertise. When you have to process that data, it has to be reviewed, line by line, by experts that know how to look for burials. There are a lot of companies out there that are used to finding, for example, pipes and cement blocks underground. However, in many cases, they simply do not have the expertise to identify a grave shaft. And so there is a real need to expand our expertise in that because there’s already a backlog of people in the queue waiting to get their data analyzed.

On getting church records

Will the pope’s visit get us access to more records? I don’t know. We had the same issue with the Anglican Church when the Archbishop of Canterbury visited Canada. The Anglican Church in Canada said that they provided all their records to the Truth and Reconciliation Commission, which we have since learned wasn’t accurate. There were records that were not provided. We know that there’s records in the New England Company in London, and we know that the Church of England holds records, as well. There was a call on the Primate of the Anglican Church and the Archbishop to get those records back to Canada for survivors doing recovery work in the Anglican schools. And so we wait. We wait. That’s part of my job and our office: to make those inquiries and to stand with the leadership in Canada to make sure that those records are delivered to the right hands. Indigenous data sovereignty is a really important conversation that we’re having as a community right now. We’re looking at what does it look like and who gets to hold these records and provide access to these records? We have all these institutions, churches and governments writing about our people and then hiding the records from us and not allowing us to see them, collect them, or correct them when they’re not accurate.

On the recent papal visit

We’re hoping to hold a number of gatherings over the next two years. We’ll be holding one in Vancouver in January 2023 on access to privacy, access to records, and privacy legislation and the issue of Indigenous data sovereignty. Communities can’t get records, and those records are vitally important to identifying every child that went to a residential school. We’re also hoping to hold a gathering to bring Elders and knowledge keepers together to talk about Indigenous laws in relation to burials and commemorating and preserving grounds. Every nation has its own laws and protocols around burial rights. What’s most painful to communities is that these little ones were buried without the proper ceremonies for their spirits. Elders have been saying that their spirits are still there. People can feel them. There are things that the children are doing to get noticed. Many have said that what happened in Tk’emlúps was the children speaking up — that we need to do more. 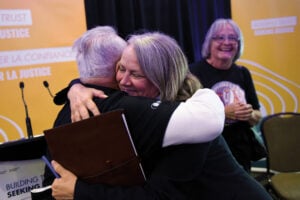 Kimberly Murray – Honour and justice for the missing children

As Canada’s first Independent Special Interlocutor for Missing Children, Unmarked Graves and Burial Sites associated with former Residential Schools, Kimberly Murray discusses her new role and how she endeavours to support communities searching for their missing children and seeking justice for the children, families and communities