“Are you okay back there?” our guide, Axel Óskarsson, shouts from the driver’s seat of a souped-up Land Rover that’s bouncing across a gently-rising snow-covered landscape. With every jolt and shudder we nearly bang our heads against the roof, but we’re still all smiles. “The problem with driving on a glacier,” Óskarsson says matter-of-factly, “is that you can’t see the bumps.”

And there are a lot of bumps on Langjökull, Iceland’s second-largest glacier, which covers about 950 square kilometres and measures up to 580 metres thick in places. I can barely believe we’re driving across this massive sheet of ice, let alone that I’ll soon be standing on top of it, soaking up views of everything I had imagined — snow-capped mountains, dormant volcanoes and steaming hot springs — before arriving in Iceland two days ago for a weeklong outdoor adventure. And make no mistake: despite the urban charms of the capital Reykjavik — its bars and restaurants, the bright splash of its primary-coloured houses and the quaint harbour — Iceland is all about open-air fun.

The glacier is the crowning stop on tour operator SuperJeep’s Golden Circle tour, a 300-kilometre journey that loops northeast from Reykjavik through a black and jagged countryside that’s bare of vegetation, except for tufts of brilliant green moss, to take in some of Iceland’s most famous historic and natural sites. Óskarsson, who, like many Icelanders, can trace his heritage back to the Nordic people who settled the island in the late ninth century — “I’m a Wiking!” he bellows in accented English, shaking his fist in the air — has already taken us through Thingvellir National Park, the original home of Iceland’s 1,083-yearold parliament, alongside the geysers and sulfurous, bubbling hot pools of the Haukadalur geothermal area and within get-wet range of the 32-metre-high Gullfoss waterfall. It’s hard to imagine that anything else in Iceland will match this. But, a few days later, something does.

I’ve always wanted to ride an Icelandic horse, so I’m thrilled to find myself at Laxnes Horse Farm, about 20 kilometres east of Reykjavik — so thrilled, in fact, that I barely notice the windy, –15°C chill. These animals are considered one of the purest breeds of horse in the world, their lineage dating back to the ninth century, when settlers brought them to Iceland from Norway and the British Isles. Icelanders take that purity seriously: there’s been a law that prohibits the import of horses since about 1100. Those 1,031 years of unsullied bloodlines has produced an animal that’s smaller than most horses and looks more like a chubby pony, but they’re renowned for their strength and endurance.

After everyone in our group of 15 riders has slipped on helmets and garish orange rain pants, we’re off, trotting along a small river at the base of a mountain range that looms over the farm. I’m on Bones, a sedate bundle of shaggy white hair who knows the trail well but keeps making unscheduled stops to snack on the long grass. We cross the river, following it until it becomes a waterfall, ride for two hours and then take a short break before heading back. As the farmhouse appears in the distance, Bones kicks things up a notch and moves into a full gallop. What happened to my serene steed? I clench the reins, squeeze my legs around the saddle and try to blink my eyes clear as they water from the stiff wind. Within seconds we’ve moved from the back of the pack to the front, and are first to arrive at the stables. As I climb off the adrenaline is still pumping, which helps me ignore the pain in my frozen toes.

All the touring and riding (plus a bit of evening carousing in Reykjavik) has left my muscles aching, and with a tiring flight back home only a day away, I know I’ll need all the pampering I can get. So I head to the Blue Lagoon, Iceland’s premier spa, for a comforting soak in its geothermallyheated seawater. Water from the neighbouring geothermal power plant feeds this huge, natural hot tub, nestled in a field of volcanic rock about 50 kilometres southwest of Reykjavik (and en route to Keflavik International Airport, which makes it easy for you to drop in before or after your flight).

Tossing my robe aside, I tiptoe across the black sand beach and slip into the warmth off the 38°C milky-blue water. Almost instantly, my aches and pains seem to recede. I swim over to the bar and order a beer, settle into a quiet cove and watch as my fellow spa-goers slather themselves with silica mud, reputed to be beneficial for your skin. Resting my head against the rocks, I watch the distant mountains flicker in and out of sight through the rising steam and wonder how I can stay in Iceland just a little bit longer — or even forever.

Canadian Geographic’s Laura Stanley took in the magnificent views of Langjökull glacier, Thingvellir National Park and a volcanic crater lake on a trip to Iceland. 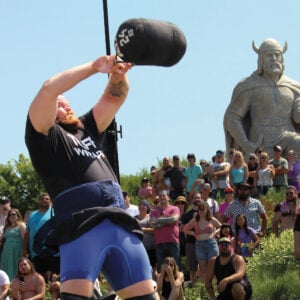