How could a warming Arctic affect bowhead whales?

A century after the whaling industry hunted them nearly to extinction, bowhead whales are once again flourishing in the Canadian Arctic. But a new challenge has emerged to test the resilience of these graceful giants: climate change. How will a warming Arctic affect the icy environment the bowheads depend on, and how will they cope? Corinne Pomerleau, a postdoctoral fellow in marine biology at the University of Manitoba, is determined to find out.

Pomerleau is analyzing tissue samples to determine how bowheads fit into the Arctic marine food web and how that web is changing. Working with Inuit hunters from the Nunavut communities of Igloolik and Pangnirtung — experts on bowhead behaviour — they use specially designed crossbows that remove small amounts of skin and blubber without harming the whale. Pomerleau’s research partners at the Greenland Institute of Natural Resources have provided similar samples from their side of Baffin Bay.

Each year at the end of February, bowheads leave waters around Baffin Island and travel to Disko Bay, Greenland, timing their arrival to coincide with an annual burst of biological production that takes place in the bay’s nutrient-rich waters when the ice melts. For three months the whales feast on arctic copepods, tiny zooplankton that are rich in lipids, or fats. “The bowheads need to eat an enormous amount to meet their energy requirements,” says Pomerleau. “They depend on that annual pulse of energy.” In May, when the banquet is over, the whales return to Baffin.

Pomerleau uses biochemical trackers — stable isotopes and fatty acids, which move unchanged through plants and animals — to trace the exact origin of the food that the whales eat and piece together their part in the food web. Then she relates this information to environmental conditions such as the temperature of the sea surface and the extent and thickness of the sea ice.

Bowheads are perfectly adapted to an icy environment, says Pomerleau. “They use ice. They go underneath it with their calves to escape killer whales. They have some of the thickest blubber of any whale and very thick skin — they can break sea ice. Even their food has a link with ice, because the life-cycle of the copepods they eat is tied to it.”

Pomerleau says the ice in Disko Bay is retreating earlier in spring and advancing later in the fall, which means the sea-ice season is getting shorter. “As the water gets warmer and there’s more Atlantic influence within Baffin Bay, the Arctic copepods that the whales need may be pushed farther north. They may be replaced by warmer-water copepods, which are smaller and leaner, not as rich in lipids.”

So what does this mean for the whales?

“Bowheads are resilient,” says Pomerleau. “They have a life expectancy of up to 200 years and they’ve seen many changes in the past. So far it seems that they are adapting well — their populations are on the rise — but in the Arctic the pace of change is rapid, and we don’t yet know how this will affect the whales.”

Pomerleau says the baseline information being gathered now is crucial because it provides a benchmark for comparison as the bowheads are monitored over the coming years. “That will enable us to understand how these iconic creatures, a true ice-specialist species, will fare as their environment changes.” 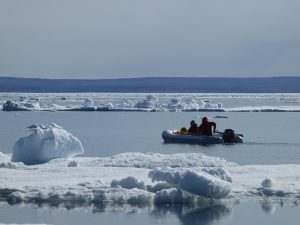 Protecting whales in an ice-free Arctic 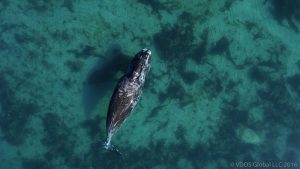