Heat map shows Calgary residents how to save energy

It all started a few years ago when a University of Calgary geography professor asked himself a simple question: Why is my house so cold?

Despite being a new energy-efficient building, Geoffrey Hay’s home was losing heat. This gave him an idea.

“I thought, ‘Wouldn’t it be great if I could see where the energy was leaving my house, if I could pull out my iPhone, click on Google Maps and up would come a map showing the energy leaving?'” Hay says.

So Hay created a colour-coded map that does just that. Now things are heating up for the professor and his university research team, which took home the grand prize for their innovative mapping project proposal at the MIT Climate CoLab 2013 contest.

The HEAT (Heat Energy Assessment Technologies) project shows homeowners where their houses are losing heat and how much it costs, both financially and environmentally, all through Google Maps. The project, now in its second phase, provides this information for free for more than 37,000 single-dwelling residences in Calgary. The next step is to expand the project to the entire city, about 300,000 single dwelling residences, followed by cities across Canada.

Behind the scenes, the project incorporates a plethora of geographic technology to provide an accurate picture of heat escaping a house, including thermal energy information, Geographic Information System data from the City of Calgary and image analysis.

To gather waste heat data for tens of thousands of homes, Hay and his team borrowed the TABI-1800, a state-of-the-art thermal infrared camera produced by ITRES, a local business specializing in airborne remote sensing technology. Over two nights in May 2012, a small plane carrying the camera flew low over Calgary, capturing images of thermal infrared radiation emitted from the surface of geographical features in the city, including rooftops, roads and trees.

Hay and his team then compared these thermal images to GIS data from the city, including property boundaries, house shapes and dwelling ages. Hot spots were determined based on peaks in temperature, allowing the team to assign each dwelling and neighbourhood a Heat Score.

The result is an easy-to-understand heat-loss map of several Calgary neighbourhoods. By locating their homes, residents can compare their Heat Score to their neighbours’, identify waste heat hot spots, and find out how much money and emissions could be saved if the amount of waste heat was reduced.

“We believe that if you see it, you’ll want to do something about it, like I did,” says Hay.

Hay and his team are currently working on incorporating waste heat solutions into the project, such as resources for suggested contractors and manufacturers, so users can easily make the necessary changes to their homes.

For more information and to explore the HEAT project, visit saveheat.co. 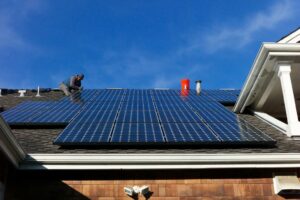 In the heating and cooling challenge, the participating families found ways to improve the energy efficiency of their home’s HVAC – from heat pumps to solar panels