Walking across Canada has never been so easy.

The Royal Canadian Geographical Society held an event in Ottawa on Nov. 18 to showcase its four giant floor maps of Canada as part of its celebrations of Geography Awareness Week. The event, hosted by House of Commons Speaker Andrew Scheer at Ottawa’s Government Conference Centre steps from Parliament Hill, had dignitaries and geographers alike walking all over the 11-by-8-metre national maps.

The maps included The War of 1812, Parks Canada: Places and Spaces for Everyone, Energy Production and Transmission and The Canadian Boreal Forest Agreement.

“Everything the Society does is dedicated to its mission of educating Canadians about their country, of reinforcing that special bond between Canada, its geography, its people, its values,” said Canadian Geographic‘s president and publisher André Préfontaine at a reception in honour of the maps and the partners who made them possible. “This is really what geography is all about.”

The maps reflect the diversity of the partners involved in creating them, including the Canadian Association of Petroleum Producers, the Department of Canadian Heritage, Parks Canada and the Canadian Boreal Forest Agreement Secretariat. But whether it was the pink and purple patches of the boreal map or the snaking lines of the energy map, all had heads bowed and eyes glued to their surfaces.

Andrew Campbell, vice president of visitor experience at Parks Canada, who partnered with the RCGS on the Parks Canada map, got a chance to peruse the four while they were all laid out together in one room. He says the maps will “create future explorers of this great country of ours.”

If the maps don’t inspire youth to take up Canadian exploration, they will certainly succeed in teaching kids about their country’s geography. The gym-sized maps are teaching tools available for schools to borrow from the RCGS.

For more information on the giant map program, visit cangeoeducation.ca. 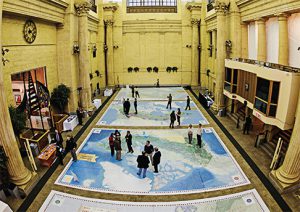 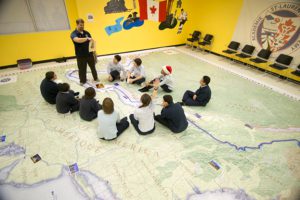