Hosted by Gordie Lucius, this Edmonton-made series takes viewers on a grand adventure to understand all of nature’s most interesting (and questionable) gifts 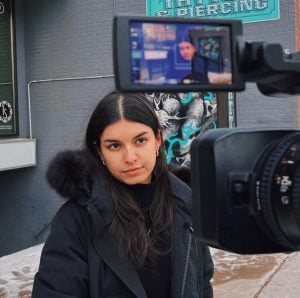 It’s time to get absolutely stoked about nature with CBC Gem’s Frick, I Love Nature.

Hosted by Edmonton-based Filipino Canadian Gordie Lucius and managed by showrunner Stephen Robinson of Westlock, Alta., Frick, I Love Nature features education and humour in perfect balance. From donning captain’s hats and using toy soldiers to demonstrate wars among ant colonies, to overnighting in a trash can to research the dietary preferences of raccoons, Frick, I Love Nature uses whimsical humour and handmade puppets to bring the wonderful world of Canadian nature to audiences across Canada.

Covering a range of topics like animal navigation, camouflage and genitalia, each 20-minute episode is jam-packed with informative facts about wildlife and well-timed and hilarious punchlines. But Lucius and Robinson are not just out to get laughs.

“We can bring this type of entertainment, knowledge and facts, and do the work to make sure it’s all correct,” says Lucius about their drive in creating the show. “Just to show people we can all do this — go out there, see for yourself, ask questions and find people who know the answers and learn from these practitioners.”

He means the scientists and specialists featured on each episode. The scientists provide the factual answers to all the questions posed by Lucius, who represents not only himself as a nature enthusiast, but the vast majority of people who love nature, yet may not know where to find accurate information on their favourite topics. Lucius acts as the bridge between science and the public by making hard-to-understand facts about the natural world more accessible for everyone.

“Both Gordie and I probably had some imposter syndrome at the start of this,” says Robinson. “We’re not biologists, but if you spend enough time and you’re excited enough about a certain topic, you can become really well-versed and provide value to other people on that topic.”

On a more personal level, both Lucius and Robinson have thrown themselves body and soul into the making of Frick, I Love Nature, both giving the gift of knowledge and receiving it at the same time. This comes in the form of a heightened appreciation for nature. In a simple moment, Robinson describes his observation of a robin during the spring. Thanks to what he learned in creating Frick, I Love Nature, he was able to identify the bird’s behaviour as a mating ritual.

Adds Lucius, “It just helps to slow things down, appreciate [nature] more and know that every little thing has a story and its story is there for you to see if you want.”

“Also, you become so interesting at parties,” laughs Robinson. “So many animal facts.”

The first season of Frick, I Love Nature is available now on CBC Gem. Fans can also look forward to lots of fun and lots of snow in a bonus episode on the Canadian Arctic which will be released July 27.