Herb Norwegian, Grand Chief of the Dehcho First Nations, is the recipient of this year’s Glen Davis Conservation Leadership Prize

Thirty years ago, a band of academics, elders and youths gathered around a campfire to talk about protecting Dehcho land.

From that discussion grew an ambitious land use plan which seeks to protect 50 per cent of Dehcho traditional territory, an impressive swath of land encompassing 100,000 square kilometres of boreal forest, wetlands and watersheds in the southwestern corner of the Northwest Territories.

One of the main proponents of the Dehcho land use plan was Herb Norwegian, Grand Chief of the Dehcho First Nations. Norwegian was recently awarded the Glen Davis Conservation Leadership Prize in recognition of his contribution to large-scale conservation.

“The interesting thing about the land use plan is that the foundation that it’s based on is traditional knowledge,” says Norwegian. “So every Dene in our territory would have made some kind of a contribution.”

The plan is novel in that it combines the latest GIS mapping technology with the lived experience of the Dehcho Dene.

The planning committee interviewed elders to create more than 50,000 data points from traditional knowledge. They also conducted surveys to determine mining, forestry, oil and gas and agricultural potential. The maps they created include everything from important Dene spiritual and cultural sites to caribou ranges to fire history.

Under Norwegian’s leadership, Nahanni National Park Reserve, in the western part of the Dehcho land, has expanded sixfold since its creation in the 1970s. “Back then it was just a little sliver of parkland,” he says.

The park now permanently protects 30,000 square kilometres of the Nahanni watershed, a spectacular expanse of emerald forest, jagged granite pinnacles and plunging waterfalls twice the height of Niagara Falls. Nahanni is home to a plethora of animals, including grizzly bears, woodland caribou and wood bison.

The traditional lands and waters of the Dehcho Dene stretch over more than 200,000 square kilometres. The Dehcho First Nations are a regional Indigenous coalition representing eight Dene First Nations and two Mètis communities.

An important part of the plan is that it aligns with Dene values, which include respect, sharing, caring, equality and pride. But pulling the plan together has not been without immense challenges.

“When you draw a perimeter around this sacred land that you want protected, the first things that governments and industry start pointing fingers at are the emeralds and the oil and gas and things,” says Norwegian.

For Norwegian, the plan is about more than just protecting land. He wants to send a signal to the rest of Canada that First Nations are at the forefront of creating a brighter future.

“Those days have long gone and now we’ve come out of the ashes of colonialism and we’re  crawling our way up to the top of the heap. That’s what this is all about.”

Norwegian was the unanimous choice to receive the $10,000 Glen Davis Prize, which was established last year by WWF Canada and the Canadian Parks and Wilderness Society (CPAWS).

Nominations for this year’s prize came from all over the country. “Glen would have just glowed if he’d seen the quality of people being nominated,” says Monte Hummel, president emeritus of WWF Canada, who knew Davis for close to 40 years.

Davis, a Canadian philanthropist and successful businessman who had inherited his father’s business empire, made large financial contributions to various conservation organisations. The prize is the conservation community’s way of remembering him for his passion for nature and not for his tragic murder in 2007.

“He had a big place in his heart for big wilderness, big-scale conservation accomplishment and he also had a philosophy of investing in people as individuals,” Hummel says.

The prize is adjudicated by one representative each from WWF Canada, CPAWS and the Davis family. Adjudicators look for individuals playing key roles in large-scale conservation projects and who have made personal financial sacrifices to do so. Hummel says that Davis would be thrilled with the choice of Norwegian. “Herb is really trying to accomplish something at the scale that Glen felt was necessary.”

Hummel emphasizes that pushing through the plan has been an uphill grind for Norwegian. The first land-use plan was completed in 2006 and it’s still not been approved by the federal government.

“He’s been absolutely heroic in his steadfastness,” says Hummel. “It’s about time that Herb got publicly recognized for being in the trenches and being the visionary that he’s been.”

Norwegian himself is modest about his accomplishments. “There are leaders out there that deserve the same kind of attention. I just feel happy that something like this has come about and I’m honoured.” 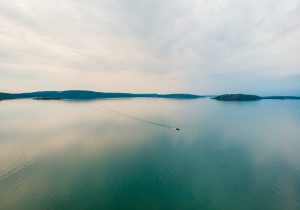