The LandMark map is harnessing the power of cartography to help indigenous peoples defend their lands.

“More indigenous territory has been claimed by maps than by guns.”

So wrote geographer Bernard Nietschmann in 1995, as he encouraged Caribbean tribes to reclaim their traditional lands. His statement’s corollary — that more indigenous territory can be defended with maps than with guns — is the idea behind LandMark, an ambitious project by the World Resources Institute to map the world’s indigenous and community lands and their legal status and display them in a public, interactive and user-friendly format.

The online map, powered by Esri, launched in beta last month and has already received positive feedback from governmental and non-governmental organizations, said Peter Veit, one of the lead advisors on the project.

“We’ve had lots of offers of help in terms of identifying additional data layers we could put on LandMark,” he said, adding there is a crowdsourcing component to the map in the sense that users can suggest changes and submit their own data for review.

Veit said the overarching goal of LandMark is to help indigenous people defend their collective land rights in the face of government or private expropriation. However, he noted that many businesses are recognizing the power of the platform to help them avoid costly legal battles over contested lands.

“[Companies] no longer want to rely solely on government claims that the land is vacant, idle and available for investment,” he said. “They want to do their own due diligence and you could consider this map a first-order title search for them.”

The information on Canada’s indigenous lands currently displayed on LandMark came from data that was available in the public domain; however Veit said the team is aware the Canadian picture is not complete.

“I’ve been in touch with a number of NGOs and government organizations to identify the other lands that are held so we can have a more accurate picture of the lands that are used and held by indigenous people in Canada,” he said.

Anyone with information they feel could improve LandMark is asked to contact Veit and team through this form. 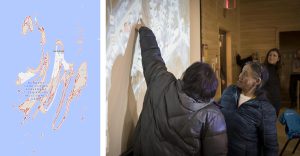