Colour the Trails: Taking up space with Demiesha Dennis

Part of our ongoing Colour the Trails series
By Nyarai Tawengwa

Demiesha Dennis is the founder of Brown Girl Outdoor World, an organisation in Toronto that’s getting more Black, Indigenous and anti-racist People of Colour into the outdoors. She works as a law clerk, and is a mom to a 16 year old who is currently trying to out-fish her. Born and raised in Jamaica, where she first cultivated her love for the outdoors, she moved to Canada when she was 18. Now, she’s a voice to listen to on changing the narrative and landscape of the outdoors.

Colour the Trails/Canadian Geographic spoke with Demiesha on what the outdoors means for her, how she started Brown Girl Outdoor World and fly fishing.

On getting into the outdoors

The outdoors has always been a space for me in the sense that I grew up in Jamaica where the outdoors was always there. Someone was always saying, “Get out of the house and go outside. You’re not staying in the house. You don’t need to be in the house all day!” And with that, it was also the space where I felt most comfortable. When my cousins would come to visit, I would think, “What adventure can I take them on today? What kind of trouble could we get into?” It’s always been a space where I could be happiest.

When I moved to Canada, I noticed the conversation about who gets to be outdoors is not the same as what I experienced in Jamaica. It was more white-dominated — the space and the conversation would always be geared towards whiteness.

I didn’t seek out to change the narrative when I started. I set out to have fun. And in having fun, I realised that a lot of people wanted to have fun, too, but they didn’t have a community that was able to support the idea of them belonging in the outdoors. That’s how Brown Girl Outdoor World was born. Being able to see the community build, go out and enjoy themselves has been the highlight of this whole experience for me.

When I started BGOW, I didn’t know of Judy (founder of Colour the Trails) or her work. So when I found her work, it was so epic because the conversation was being had by someone who wasn’t me. It was being had by someone who looked like me, in a different space than me— and that gave me more of a push. I felt more comfortable that I was trying something that was different — and that it was going to be challenging, but doable. It’s great to have community while you’re building community. And it’s great to have someone who has an understanding of what you are working to do, as well as them having the first-hand experience of why the work you’re doing is important.

On who BGOW is for

People tend to ask, “Why is it Brown Girl Outdoor World?” I used the word brown because it covers a full spectrum of people. It covers people who aren’t just Black, aren’t just Indigenous, aren’t just Asian or any other racial identity. It was created to give a safe space for people whose identity didn’t always fit into the general norm of who was in the outdoors. Brown captured anyone who wasn’t white, signalling, “This is a space for you.” And even when it comes to the conversation of “Is there a space for whiteness in BGOW?”, there is a space for allies. There’s a space for people who want to help build in the work BGOW is doing.

It’s also creating a space where women feel safe, where they don’t have to compete against the dominance of male identity that’s already in outdoor spaces. For people who’ve experienced certain traumas, or anything else, this can be a safe haven for them. We do have some activities where men are included, but when we do extend that invitation, it’s to spread the conversation that this is a space for men who can commit, who can help the community to build, and who can help to expand the conversation around representation in the outdoors.

On getting into fly fishing

Fly fishing is what’s most felt like home for me within the outdoors. It’s what has most challenged me. It’s what has motivated me to push harder in other things because of how challenging it is to learn.

I started out spin fishing, which is just regular rod and reel. I remember when I was younger and I’d watch these Canadian or American shows when I was growing up, and I would see these people doing this thing. I wanted to know what it was. Then I came here and realised it’s not just something that’s on tv; you can actually do it.

On the significance of fly fishing for her

It’s the immersion of the body into the water. When I go fly fishing and I’m walking up the river to see where the fish are, I am connected to the thing that’s happening between my feet and my brain — where I plant my feet next. If I’m fishing in the fall, I’m concerned about whether I am stepping in a fish’s breeding zone. Am I disturbing the other life that is below my feet? And when I am walking along the river, I’m also focused on the birds that are around me. It’s a rhythm — you stop, you stand, you fish, and your senses become entirely in tune with everything that’s happening around you.

You get out there and you completely forget every single thing you walked into that space with. You’re thinking of nothing else except what’s happening between your hand and the end of your line. It’s how it feels most connecting for me. For anyone who enjoys a specific way of connecting with the outdoors, it’s how that sport connects you to what you want to achieve out of it.

Nature becomes that voice inside my head that sits there but it’s something of a comfort. It’s not something that’s challenging me to be anything more than just Demiesha in that moment, fly fishing.

On her hopes for the future

I’m hoping to change how we, as BIPoC, see ourselves in the industry. Where, instead of focusing on how we have been limited, we focus on the joy that we found once we ventured into the outdoors. I hope the conversation becomes: “Now that I’ve found it, how can I share it with others?” I’m hoping that a young person can pick up an outdoor magazine and see themselves in it, and understand that the outdoors is a space for them as well.

I’m very hopeful that if we change our mindset and start operating in a space where we are no longer waiting for approval to step into these spaces and we are just stepping into it, the industry won’t have any option but to catch up to us. And I think that it’s slowly happening, with people like Judy, having mountain biking mentorships — things that have never been created for racialised folks anywhere. Those are the kinds of conversations we need to be having more of, so that those changes can happen.

I’m hoping that through the knowledge and the exposure that people gain by being outside, we become more mindful of how we interact with nature. How much we either give or take from nature, and how we can always work to make it better. We understand how something as simple as water temperature will affect the fish that we are searching for. Changing both our personal approach to nature, and changing how we as humans operate in those spaces. 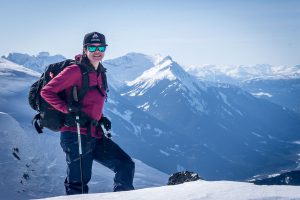 The latest in our Colour the Trail series