Explore, one of three new exhibits to open to the public at 50 Sussex in time for Canada Day long weekend, features a number of Canada’s greatest explorers, all of them tied to The Royal Canadian Geographical Society. (View the exhibit brochure, which features the stories of the explorers showcased by the collection.)

The portrait series was created by Calgary-based artist Chris Cran, one of the great forces of contemporary Canadian art. Cran, who was recently the subject of Chris Cran, Sincerely Yours, a major exhibition featured by both the National Gallery of Canada in Ottawa and Edmonton’s Art Gallery of Alberta, is known for his ability to play with illusion, for manipulating the perception of the viewer while exploring, fusing and subverting traditional artistic genres as well as contemporary movements, from pop art to abstraction and photorealism.

The pieces in the Explore series have been rendered by Cran in his iconic “striped” style, which creates an impression that changes depending on distance and perspective. When astronaut Roberta Bondar (the first Canadian woman in space and an honorary vice president of the Society) came to view her own portrait at 50 Sussex, she said, “I was amazed by how my image ‘dissolved’ as I approached it.” These works, explains Cran, require that you become an active participant, moving back and forth to change how you experience them.

It is a style suited to a collection that celebrates a number of Canada’s most active and accomplished explorers, among them scientists, surveyors and cartographers, a mariner, an astronaut and an oral historian.

From Charles Camsell, founding president of the RCGS and an intrepid Arctic explorer and geologist, to Alice E. Wilson, Canada’s first woman geologist and the trailblazing expert on the Ottawa and St. Lawrence River valleys, to Louie Kamookak, Inuit oral historian, expert on the Franklin Expedition and another RCGS Honorary VP, each of the 10 historic figures and living luminaries celebrated in this exhibit have exemplified the core mandate of the RCGS: to make Canada better known to Canadians and to the world.

Cran, himself a Fellow of The Royal Canadian Geographical Society, has been a prolific and influential artistic presence in Canada for decades. A graduate of the Alberta College of Art + Design, where he was an instructor from the 1990s until 2018, he has helped shape generations of new visual artists. In addition to the permanent collections of the National Gallery and the AGA, his often satirical and self-referential works appear in galleries and private collections across Canada and internationally. He is represented by the TrépanierBaer Gallery of Calgary, the Clint Roenisch Gallery of Toronto and the Wilding Cran Gallery of Los Angeles, Calif.

“Chris brings a new awareness to our interaction with images,” says Josée Drouin-Brisebois, senior curator of contemporary art for the National Gallery of Canada. “He’s one of those special people who sees the world and his subjects in a different way, and he shares that with us — the things we might have been missing.”

Explore is free of charge, and open to the public daily (with the exception of Tuesdays and Wednesdays) in the Upper Gallery at 50 Sussex until September.
Advertisement 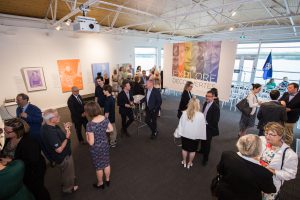 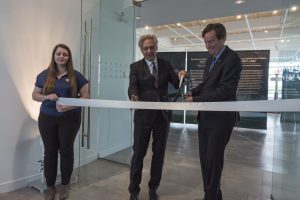