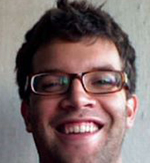 It’s been a busy few weeks for 10-year-old Josiah Launstein of Pincher Creek Alberta, as he was recently named Outdoor Photography Magazine‘s 2014 Young Outdoor Photographer of the Year based on his incredible photo of two Bighorn rams sparring in the Canadian Rocky Mountains. His winning entry was selected from over 10 000 images submitted to the international competition as the best among photographers aged 18 years or younger. Josiah and his father John recently took time away from snapping internationally renowned nature photos to speak with Canadian Geographic about his achievement.

Josiah Launstein: It felt really awesome. I was very excited!

CG: When you submitted the photo, did you expect you had a good chance to win?

CG: How did you get the photo?

JL: We were in Waterton Lakes National Park (Southwest Alberta). We saw a big group of Bighorn sheep and my Dad went higher up to photograph some of the bigger rams. My sister Jenaya and I stayed down, and these two Bighorn sheep were banging a lot, and you could hear it echo like everywhere. I went and got a good angle I thought, and started taking pictures of them.

CG: Have you taken many pictures of bighorn sheep before?

JL: Yeah, they’re one of my favourites to photograph.

CG: What do you enjoy most about your winning picture?

JL: Probably all of the action, and all the rams’ hair flying.

CG: You come from a family of accomplished photographers (John is a professional photographer and Josiah’s sister Jenaya is also an award-winning wildlife photographer). What has growing up with so many great photographers been like?

JL: I love going out for drives with them.

CG: So it’s nice to have family members around to take you out for trips to take photos?

CG: Now for a very important question: who is the best photographer in the Launstein family?

CG: Would you like to grow up to be a professional wildlife photographer?

John Launstein: Josiah likes nature in general. He is probably the most balanced or broadest of all three of us, in that he’ll recognize a great image with the spring flowers in the foreground and the Rockies behind, or just a really cool image of pine needles on the forest floor. Josiah is probably more of an overall nature photographer, whereas Jenaya is exclusively wildlife.

JL: I think something that I’ve learned. I love being in nature.

CG: What is your favourite type of animal to photograph?

CG: Other than animals, what are some of your favourite things to photograph?