A Canadian photojournalist has been shortlisted for the 2021 People’s Choice Award in the prestigious Wildlife Photographer of the Year competition for her stirring image of a kangaroo and her joey in a burnt eucalyptus plantation in Australia.

Jo-Anne McArthur spent several weeks in southeastern Australia in early 2020, capturing images of animals impacted by the bushfires that devastated parts of the country that year. Working alongside Animals Australia, an animal protection organization, she was able to access burn sites and witness rescue operations by veterinarians. An estimated three billion animals were killed or harmed in the fires; this eastern grey kangaroo and her joey, encountered near Mallacoota in the state of Victoria, were among the lucky survivors.

The photo, which went viral and has earned accolades in other international photography competitions, is “emblematic of animals in the Anthropocene,” says McArthur, referencing the proposed geological epoch that dates from the beginning of significant human impact on Earth’s natural systems.

McArthur has spent nearly two decades documenting the relationship between humans and animals. Much of her recent work has focused on animals, both domestic and wild, caught in the crosshairs of the climate crisis, be it intense fires in Australia and western Canada or the recent historic flooding in the Pacific northwest.

It’s difficult for us to perceive the sheer scale of three billion suffering animals, McArthur says. “That’s why it’s really important to show those individuals and capture their faces,” she says.

The kangaroo photo is so powerful because the animal is “looking right at us,” McArthur adds.

“I face animals and they face me, and it always seems like they’re asking, ‘What are you doing? What’s next?’”

McArthur was moved to pursue a career in animal photojournalism after encountering a monkey in Ecuador that had been trained to perform tricks for tourists, a sight she found humiliating for the animal. Her project, WeAnimals, has since grown into a full-blown media agency with 46 contributors worldwide. Working with non-governmental organizations, media outlets, educators and policymakers, they “tell the stories of animals in the human environment,” be they used for food, fashion, entertainment, work, religion or experimentation. The group recently published a book, HIDDEN: Animals in the Anthropocene, which features 200 images of animal industries around the world.

McArthur’s work is jarring, often brutal, but that’s the unfortunate reality of our relationship with animals that aren’t beloved as pets or revered as enduring symbols of the wilderness, she says.

McArthur has been awarded in the Wildlife Photographer of the Year competition twice before, once in the photojournalism category for an image from a “rattlesnake roundup” in Texas, and a People’s Choice Award for a photo of a man holding a gorilla rescued from the bushmeat trade. McArthur’s kangaroo shot is one of 25 images shortlisted for the 2021 People’s Choice Award from among more than 50,000 entries to the competition, which is developed and produced by the Natural History Museum in London, U.K. The voting period runs until Feb. 2, 2022, and the winner will be announced on Feb. 9, 2002.

McArthur hopes her photo will spark discussion and reflection on the plight of animals in this time of global change.

“With the kangaroo image, as with all of my images, I just want people to not turn away from animals as we’ve been doing for so long,” she says. “It’s time that we consider animals, because our decisions have led us to where we are today, which is an ecosystem in crisis.” 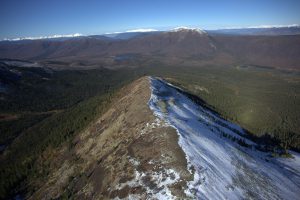