A Canadian photographer has won an international photography competition, beating out 20,000 entries from across 51 countries.

Polar bear mothers exit their maternity dens in February and March, when their cubs are around four months old. Conveniently for the hungry bears, baby seals begin to appear on highly accessible Hudson Bay pack ice around the same time.

“As environmental photographers, it is our duty to capture the beauty of places and species at risk and raise awareness through the universal power of imagery,” says Gilardini, who braved -54C temperatures and 60 kilometre/hour winds to capture the photo.

Originally from Switzerland, Gilardini lives in British Columbia. Her photo is now on display at the Smithsonian’s National Museum of Natural History in Washington, D.C.

“While science provides the data necessary to explain issues and suggest solutions, photography symbolizes these issues,” Gilardini writes. “Science is the brain, while photography is the heart, and we need to reach people’s hearts and emotions in order to move them to action, for nature and for us.” 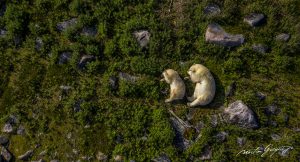 Gregus received the Rising Star Portfolio Award in this year’s Wildlife Photographer of the Year competition. Canadian Geographic caught up with him for the story behind the photos.