Can you hear me now? Prairie songbirds change their tune to cope with human noise

A recent study suggests that human-generated industrial noise is triggering stress responses in songbirds, making it harder for them to communicate.

Birds living near noisy train tracks, oil wells and even highways have been known to adapt the sound of their songs in order to be heard by other birds. But this study suggests that wildlife might be more affected by industrial development than previously thought.

“As humans, we’re having these impacts on birds that we might not have realized, because normally you wouldn’t look at a bird and think it looks really sad, or upset, or stressed or something like that,” says Nicola Koper, a University of Manitoba researcher and co-author of the study. “We kind of assume that if they show up, then they must be okay, but that’s not actually necessarily the case.”

The study recorded Savannah sparrows living near loud oil-drilling sites in Brooks, Alta. and compared their songs and stress levels to “control” sparrows living in quiet, natural sites. Both songs were then played to sparrows at each site.

The control sparrows reacted with confusion and aggression to the adjusted songs, but the sparrows from noisy sites generally seemed to understand the changes. Likewise, the test sparrows in Brooks struggled with the unadjusted songs from the quiet sites. This suggests that in their race to adapt to human infrastructure, some groups of songbirds are losing the ability to communicate with other members of their species.

Another factor complicates the birds’ attempts to communicate: they are stressed out. Researchers found that levels of corticosterone—a hormone related to stress—in the birds rose significantly the closer they were to the oil wells, which impacted how well they interpreted songs.

“The stress interacts with the song,” Koper says, adding that birds with higher corticosterone levels “have less tolerance for errors” in interpreting an adjusted song than those with lower levels. She compares the effect to a parent dealing with a screaming child: “If you’re really stressed out with everything going on in your life, you’re like, ‘I don’t understand what you’re trying to tell me!’ But if everything’s fine and you’re relaxed, you’re like ‘Okay, honey, I can hear that you’re actually fine, even though you’re crying.’”

But stress does more than inhibit the birds’ abilities to communicate: it seems to make it even harder for them to adapt to the rapid pace of human development.

Koper hopes to take the study’s findings to Canada’s oil industry, to demonstrate the effect of drilling on wildlife, and make recommendations that could help reduce its impact. One will be to utilize sound-reduction methods like sound barrier walls, mufflers and submersed oil pumps at drill sites—all of which the oil industry has already developed for sites close to human dwellings. “They’re all commercially available, and it’s the kind of thing that the industry could consider implementing as a way to reduce the noise for birds,” Koper says. 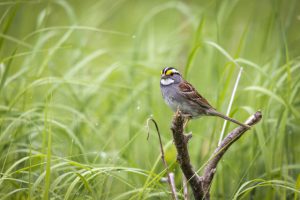