Bringing back the peatlands

In a promotional video for the Canadian Association of Petroleum Producers, Patrick Moore marvels at weeds.

As the co-founder of Greenpeace walks through what appears to be a lush meadow, brushing the tips of his fingers over grasses, he extols the beauty of a landscape that was once a mining operation in the Alberta oil sands. The land, Moore says, has been successfully reclaimed, meaning it has been converted from an open-pit mine to a self-sustaining natural state.

A new study to be published in the Proceedings of the National Academy of Sciences shows that wetlands that are mined cannot be restored. Peatlands, which consist of layers of decomposing organic matter accumulated over thousands of years, are particularly difficult to recreate. The study estimates that up to 65 percent of peatlands will be lost to oil sands mining, releasing up to 47 million tons of stored carbon, the equivalent of seven years of oil sands operations.

“There’s a point [in the CAPP promotional video] where the camera zooms in and we see a bee buzzing around a bright yellow flower,” says Rebecca Rooney, the study’s lead author. “And you think, ‘Oh, it’s such a nice, green landscape.’ But that flower is a birdsfoot trefoil, which is an invasive species from Eurasia characteristic of roadsides and watelands.”

When it comes to reclaiming peatlands, says Rooney, “it’s not enough to make it green; it needs to be ecologically healthy.”

If you dig a pit in a peatland, she says, you can go as deep as 6 metres of thick, rich, organic matter, and the pit will probably fill with water as you go. If you dig through reclaimed lands, within a metre or so you’re down to sand or clay-like dirt.

“There would be hardly any organic material,” says Rooney.

Reclaimed lands will also be much drier and saltier than their peatland precursors.

Sediments from peatlands are more nutrient-rich than those of reclaimed lands. Photo: Rebecca Rooney

Plans for the closure of several mines show that much of northern Alberta’s boreal wetlands will be converted to forest instead of being restored back to wetlands. This presents a number of problems. Having younger, drier trees in the area, for instance, exposes the region to the threat of forest fires.

Tamarack, black spruce, fens and bogs will be replaced with white spruce, jack pine and trembling aspen. Labrador tea and mosses will yield to blueberry, dogwood and low-bush cranberry, which sink less carbon into the soil.

It’s easy to point fingers at the industry, but they’re “doing the best they can” under the circumstances says Rooney. Companies like Syncrude Canada and Suncor Energy, which were among the operators who provided Rooney with data, are operating blindly in reclaiming peatlands. There is no legal obligation or even a set of guidelines for them to return wetlands to their natural state post-production.

“The government hasn’t provided [companies] with biological targets they need to reach or any standardized way of how the job should be done,” says Rooney.
Through the study, Rooney found that the way mines report to the government is highly inconsistent.

“One company might produce a map; another might produce a table,” says Rooney. “One company might be referring to the development area—that is, exactly the footprint of where they’re going to put the mine and not counting anything around or between. Others might report on the local study area, which includes their footprint plus the buffer area around it. It’s like [comparing] apples and oranges.”

This study could point the way forward to new standards for how mines should reclaim wetlands. For Rooney, it’s a way to inform citizens of one of the costs of oil sands activity.

“There’s a substantial campaign on the part of CAPP (the Canadian Association of Petroleum Producers) putting out videos and in essence trying to say they’re putting [the land] back to the way it was,” says Rooney. “But they’re not going to restore it.”

She hopes her study will contribute to a larger discussion of whether the economic benefits derived from the oil sands outweigh the social and environmental costs. 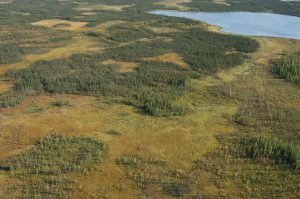 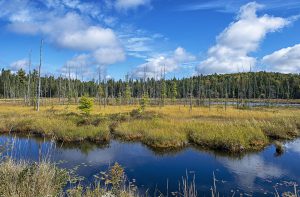 A huge part of Canada's northern geography, peatlands are critical to regulating our climate — and more