TransCanada Corp. has ceased all preliminary work on a key part of its proposed Energy East pipeline at Cacouna, Que., after the Committee on the Status of Endangered Wildlife in Canada (COSEWIC) classified the beluga whale population in the region as endangered in November.

The proposed oil terminal at Cacouna, which is on the south shore of the St. Lawrence River, had been criticized for posing a threat to the habitat of the world’s southernmost population of belugas, which use the waters as calving grounds. COSEWIC says that there were once as many as 10,000 belugas in the region, but that there are now fewer than 1,000.

Michel Bélanger, the president of Nature Québec, told the Globe and Mail in October that the pipeline could be fatal for the whales. “People are very concerned,” he said.

Within a week of COSEWIC designating the beluga as endangered, Quebec Premier Philippe Couillard said at a news conference with Alberta Premier Jim Prentice that TransCanada should abandon its plan to build a terminal in the area.

The terminal at Cacouna was meant to be one of the last stops for the 1.1 million barrels of crude oil per day that the pipeline would carry from Alberta to refineries in Quebec and New Brunswick before being shipped abroad.

“As a company that cares about nature and environmental stewardship, we have repeated many times our commitment to the laws and regulations in the various federal and provincial jurisdictions where we operate,” said Energy East spokesperson Tim Duboyce in a statement. “That applies to the situation of beluga whales in Quebec. Therefore, we are standing down on any further work at Cacouna, in order to analyze the recommendation, assess any impacts from Energy East, and review all viable options as we look ahead.” 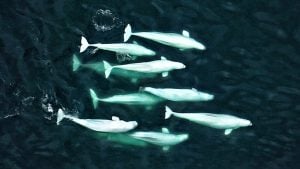