Disease has appeared for the first time in Manitoba, Minnesota and Wyoming
By Cori Lausen

Spring is a time when life bursts forth. We see new growth, births, and the emergence of hibernating animals. But as a bat biologist, spring is now a season of dread for me. Once again this year, I found myself awaiting news of the spread of deadly white-nose syndrome (WNS). We have learned that the fungus that causes this disease, attacking bats as they overwinter, has continued its westward march, appearing for the first time this year in Manitoba, Wyoming and Minnesota. This brings the tally to 36 infected U.S. states and seven infected provinces.

Spring is a critical time for bats as they are just rousing from their winter torpor, having used up much of their stored fat.  Quickly finding insects to feed on is desperately important to restore their depleted energy supplies. But bats that are fighting off a WNS infection are in even more desperate shape – they have already been roused repeatedly by the fungus and have wasted significant energy over the winter. Infected bats may be out seeking insects long before insects are flying. Many infected bats – in fact, most – will not survive.

Here in British Columbia, we have been racing to prepare – and defend against – the eventual arrival of WNS because we have a lot to lose: There are twice as many species of bats in the west as in eastern Canada. However, we still have a lot to learn about these bats and their habits, including where they winter, whether they migrate, and the kinds of habitat they require.

What really keeps me up at night (besides the never-ending fieldwork of tracking bats into the wee hours) is the thought of the fungus making giant leaps across the west, rather than just a slow and steady spread as bats pass it to other bats. In B.C., we have been particularly on edge since the discovery of WNS-infected bats in Washington State in 2016. This was the first giant leap, catapulting the WNS fungus from the east into the west.

The WNS fungus was first found in North America (it is common in Europe, where bats seem to live with low levels of infection) in New York State in 2006. Since then, millions of bats in eastern North America have succumbed to the disease. Now, infected-but-surviving bats represent an ever-growing source of fungal spores that can potentially be transferred to a new location. And that’s worrisome because we know bats don’t just rely on their amazing flight skills to move. They are equally adept at hitching rides with humans.

Bats can squeeze into the tiniest locations – they only need a crack as big as their skulls (even smaller than an acorn in some cases) to squeeze through. We’ve had reports of bats hiding out in rolled-up camper van awnings, patio umbrellas and tent trailers. Transport truck trailers are a particularly inviting ride, with their dark interiors and relatively high sides where bats can easily stow away in top corners unnoticed.

And bats don’t just travel by road – they are also hardy seafarers and commonly hide out on boats moving up and down the west coast. A few years ago, a flock of Asian bats were discovered in the hold of a Chinese cargo ship that docked in Vancouver.

All of this means we may have far less time than we think to prepare for the arrival of WNS in western Canada. And that matters, because there are important things we can do to try to stave off or reduce the impact of WNS.

Thanks to our field research and literally deep work with intrepid cavers, we know that most western bats do not gather together in large groups to hibernate like their eastern cousins. This could slow the spread of the disease, but we will only be able to confirm that if we have good intelligence on population numbers and distribution before and after the arrival of WNS.

But these differences also mean that all potential treatments for WNS being tested in the east are unlikely to help western bats due to the requirement that the measures be applied during winter in hibernacula. That put me on the hunt for a western-specific solution to the WNS problem – one that could improve the chances of bats surviving the disease without us having to know where they hibernate.

Enter Thompson Rivers and McMaster universities. Dr. Ann Cheeptham and Dr. J.P. Xu are working with me to develop a probiotic treatment for bat wings that can arm bats to fight off the fungal infection. Just like your probiotic yogurt provides beneficial bacteria to your digestive system, naturally occurring wing microbes will give all bats a fighting chance of surviving hibernation despite WNS. Strategic placement of probiotic applicators at summer roosts will transfer the beneficial microbes as bats move in and out of these roosts. We think it is an idea with promise. To aid implementation, we have helped organize community bat programs that provide outreach to western Canadians with the goal of locating significant summer nursery roosts so that when the probiotic is ready to deploy, so are we. These citizen science programs are providing valuable information about bat species, locations and habitat preferences.

Bats, of course, play an enormously important role in ecosystems. They eat millions of insects and their role in controlling bug populations influences everything from fish diversity to the spread of insect-borne diseases, such as West Nile disease. Bats’ insect control services are also immensely valuable to our economy, particularly agriculture and forestry. And reduced pesticide use is always better for human health. There are so many reasons that we need bats.

That’s why we need all hands on deck to help bats. You can help by preserving ideal bat habitats like old trees, snags, and out-buildings for them to roost in during summer when they raise young. And you can help us buy time to prepare for WNS by spreading the word about keeping hatches and awnings closed at night on vehicles that will be commuting long distances.

Governments in Canada, meanwhile, can help us accelerate the critical scientific research that can lead to a better informed and more effective WNS response. Unfortunately, government wheels often turn far more slowly than the wheels of that transport truck carrying infected bats from Ontario to B.C. So the question right now is, which will arrive first in western Canada: a strong, coordinated and well-resourced plan to deal with the arrival of WNS or the disease itself?

Dr. Cori Lausen is a conservation research biologist with WCS Canada. She has been actively working on bat conservation issues in western Canada for more than 20 years. Programs that she administers or has helped to develop include the North American Bat Monitoring Plan, BatCaver, and Alberta Community Bat Program.
bats wildlife biology conservation British Columbia 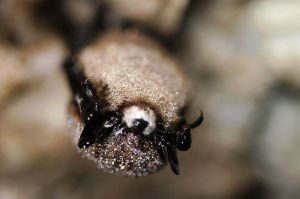 This deadly disease has killed more than 5.7 million bats, and it's spreading