The snowy owl is an iconic North American bird that is almost entirely covered by feathers to keep them warm in colder climates.

COSEWIC Status: Not at risk

In the Harry Potter films, Harry’s owl Hedwig is played by snowy owls. Although the character is depicted as female, male owls were used for their completely white plumage.

The snowy owl is covered in white and dark brown feathers — perfect camouflage in their usually snowy habitat. Males can be pure white, but females always have some brown feathers. Since snowy owls are found in colder climates, they have a thick layer of down underneath many layers of feathers to keep warm in the most frigid temperatures.

Unlike many other owl species, the snowy owl is not completely nocturnal. That’s because its breeding grounds are above the Arctic Circle, where there is 24-hour daylight in summer. In winter, snowy owls hunt during the day or night, depending on local conditions and the prey they’re seeking.

The snowy owl is well equipped for hunting; they can see and hear much better than humans. Their luminous yellow eyes have rings of feathers around them that help to reflect sound to their ears. These birds are great judges of distance, which helps them to swoop down on prey with great accuracy. Their long black claws, ideal for snatching up prey such as lemmings, can grow up to 3.5 centimetres long.

Snowy owls usually stay with one breeding partner for life. Breeding season begins in May after the owls return to the Arctic from their winter grounds. During courtship, a male snowy owl will often kill a prey animal, usually a lemming, and hold it in its mouth to attract females.

Snowy owls are opportunistic hunters. They prefer to feast on small mammals, including lemmings, ground squirrels, voles, hares and rabbits. They will also hunt birds, such as songbirds or geese, and fish, as well as scavenge carrion.

Some snowy owls live in the Arctic regions of North America and Eurasia year-round. Others only stay during the breeding and nesting seasons in the summer. When winter comes, these birds migrate to southern Canada and parts of the United States. Some snowy owl populations cross the Atlantic Ocean, migrating between Russia and Canada. A sudden boom in the number of snowy owls migrating south is called an “irruption.” In the winter of 2018, an irruption brought huge numbers of owls to Toronto, where they are normally quite rare. 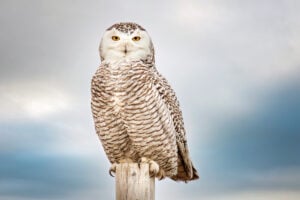