A brutal and chaotic period of Canadian history gets the Game of Thrones treatment in Frontier, a new Discovery Canada series premiering November 6 at 9 p.m. ET. The show follows the agents of rival companies as they fight for dominance in the North American fur trade in the 1700s. Canadian actor Allan Hawco (of Republic of Doyle fame) co-produced and stars in the show; here, he discusses why its value transcends entertainment.

On the historical accuracy of the show

The time period is so rich in terms of potential for high-stakes conflict, with all these different companies jockeying for position in the fur trade. It’s really North America’s coming-of-age. The show takes a lot of dramatic licence, but the writers worked very hard to make sure all of it was plausible.

On his role as a down-on-his-luck trader

I had never really thought of the 18th century as an exciting time period, which is completely ridiculous when you start to break down the variables. My character, Douglas Brown, has come over from Scotland with two of his brothers, and they’re on the brink of bankruptcy. The reality is just crossing the Atlantic at that time was a life-or-death scenario. These people had to be fearless to stake a claim in the new world. Of the three Browns, Douglas is more thoughtful, less prone to shoot from the hip, whereas his brothers are constantly involved in mayhem.

I don’t know what it is about us as a nation — if we’re self-conscious about our past or if we simply don’t believe that it’s interesting to others — but there are so many different parts of Canada’s story that could be explored in film and television, and it’s surprising they haven’t been tapped into. Brad Peyton, the director, set the bar very high, and I feel like everyone involved in Frontier brings it to a level that’s competitive with anything else out there.

On not shying away from difficult truths

I think Frontier is going to introduce people to a part of our past that’s interesting but also terrifyingly ugly. There’s a lot we can be ashamed of, but that should propel us to move forward as a nation and not repeat the mistakes of the past. I know we’re talking about entertaining drama, but you hope that stuff like this has a deeper impact. 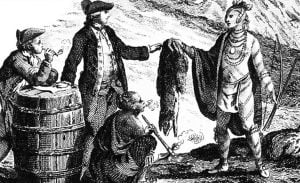