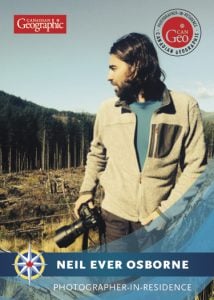 When I need storytelling inspiration for a photo assignment, I draw on a 3,500-year-old tale called The Epic of Gilgamesh. This particular story—originally inscribed on clay tablets and regarded as the earliest surviving great work of literature— is an epic poem from ancient Mesopotamia about Gilgamesh, a semi-divine Sumerian king, and his path to wisdom and maturity. When I first read it, I challenged myself to question why these words still resonate so many years later. Why do some stories prevail while others do not?

As a visual storyteller working today, I task myself with a very similar question; In a world over-saturated with stories, what can I do with a story to capture someone’s attention and, more importantly, keep it?

I’ve found that if you stick to the hero’s journey, the prevailing story archetype, you can’t go wrong. For example, in The Epic of Gilgamesh, the hero is the protagonist, Gilgamesh, who eventually achieves great feats on behalf of civilization. For a modern-day reference, think of Frodo’s journey in Lord of the Rings. Simply put, the these stories work by bringing an audience along for the adventure.

This is often the approach I take in my own visual storytelling while working with non-governmental organizations (NGOs) in the environmental sector. These organizations are full of heroes and I try to introduce them. It might be Chuy, a turtle poacher turned conservationist in Mexico, or a beekeeper campaigning against agriculture companies in southern Ontario, or an elder from the Kayapo tribe in the Brazilian Amazon who defends the forest from external pressures. The idea behind this kind of storytelling is that each person who sees the photos or video might be enticed to take part in that organization’s mission. That is, to join sides with the hero.

This concept of getting to know an organization can be strengthened exponentially by the advent of 360-degree video. By recording a view in every direction at the same time, each journey becomes even more immersive and experiential. Many of these environmental organizations are working towards the safeguarding of habitat or the conservation of certain species, so getting to know these places and animals better will certainly be advantageous.

According to some scholars, ancient stories like The Epic of Gilgamesh were meant to be heard and not read. Now, with 360-degree technology, perhaps the story experience can go one step further. While I can’t take you back to the ancient city of Uruk around 1,500 BC when the mythological Gilgamesh ruled, I can take you on an immersive journey to a rockhopper penguin colony in the Falkland Islands where the Falklands Conservation NGO is working to protect wildlife for future generations.

Watch the video below shot by Neil Ever Osborne, a Nikon Brand Ambassador, on a Nikon KeyMission 360 camera.

Journey to a Rockhopper Penguin Colony in 360 from Evermaven on Vimeo.

Neil Ever Osborne is a partner at Evermaven, a communications agency based in Toronto that creates editorial and narrative experiences to express the relationship between people and planet. 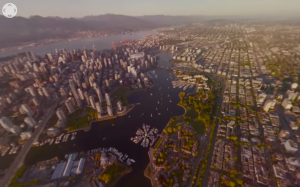 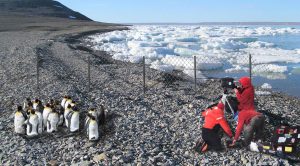