Only about 400 North Atlantic right whales remain in the wild
By Angelica Haggert
February 27, 2020

For the fourth year in a row, the Government of Canada has put measures in place for the protection of the North Atlantic right whale.

For 2020, a new seasonal dynamic closure protocol will replace a static closure in the St. Lawrence Seaway. When a whale is detected, a 15-day closure of the fishery will take place in the area. If whales are detected within that 15 days, the area will remain closed until November 15.

If two 15-day closure areas overlap, both areas will remain closed until November 15.

A closure protocol is also being expanded into the Bay of Fundy. Fisheries and Oceans Canada will also impose new gear marking requirements and work with the commercial fishing industry on gear modifications for 2021.

To allow the snow crab fishery in northern New Brunswick to start early, Fisheries and Oceans Canada has contracted a third-party icebreaker to provide services in the Acadian Peninsula, Baie des Chaleurs and Northumberland Strait.

Environmental groups say while the measures are encouraging, more needs to be done to ensure the survival of the North Atlantic right whales.

“The success of these measures depends on surveillance,” says Oceana Canada campaign director Kim Elmslie. “Fishing zone closures and speed requirements for vessels are triggered based on whale sightings, so we strongly urge the government to step up surveillance.”

According to today’s announcement, the government will add acoustic detection using hydrophones and aerial surveillance using drones to its efforts to detect whales in Canadian waters. 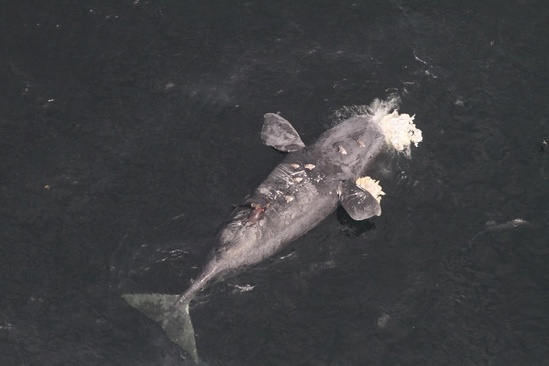 A dead right whale floating at the surface of the water. (Photo: NOAA)

Missing from the measures is an emergency response plan should there be a right whale death in Canadian waters, Elmslie says.

“The death of any one right whale is one too many. Their survival depends on us.”

Shannon Arnold, senior marine program coordinator for the Ecology Action Centre, would also like to see an emergency response plan.

“We want to make sure the government is ready to respond quickly should the announced measures fail,” says Arnold, adding that if the rate of deaths in the last few years continues, the species will be functionally extinct by 2040.

There are only about 400 right whales left — and only 100 of those are estimated to be females of reproductive age. The animals migrate up and down the Atlantic coast of North America, typically spending summers feeding in the Bay of Fundy and off southwest Nova Scotia. In recent years, right whales have been spotted with increasing frequency in the the busy Gulf of St. Lawrence, where they are vulnerable to entanglement in fishing gear and strikes from large, fast-moving ships. There were nine whale deaths and four entanglements in 2019.

• “There’s no coming back from this:” Why the global ocean crisis threatens us all