The portable hospital rooms made by Hamilton, Ont.-based company, Fero International, may aid in the frontline response to COVID-19
By Leila El Shennawy
November 17, 2020

A Canadian company based in Hamilton, Ont. has constructed portable hospital rooms using shipping containers, the first of their kind in Canada.

The company, Fero International, consulted with medical professionals from the University Health Network (UHN) to turn the containers into functional and flexible medical settings.

Sabrina Fiorellino, CEO of Fero International, says the rooms can be used as operating rooms for surgery, regular patient rooms, in long-term care, and in mass casualty events, among other possibilities. During the COVID-19 pandemic, Fiorellino says the rooms can be used to help address bed shortages and hospital waiting lists, as a solution while permanent infrastructure is built.

Fiorellino’s background is in construction, but she says she was moved to contribute to the frontline response after her mother received a double lung transplant and her grandfather died during the first wave. Her brother and sister-in-law are also frontline workers.

“I wanted to do something to help,” Fiorellino says.

She says her company decided to use shipping containers due to their efficient cost, and because they wanted to ensure the rooms could be rapidly deployed during a crisis.

The rooms are outfitted with HVAC, oxygen, suction and medical gas lines, high definition camera and audio, and medical devices and finishes. 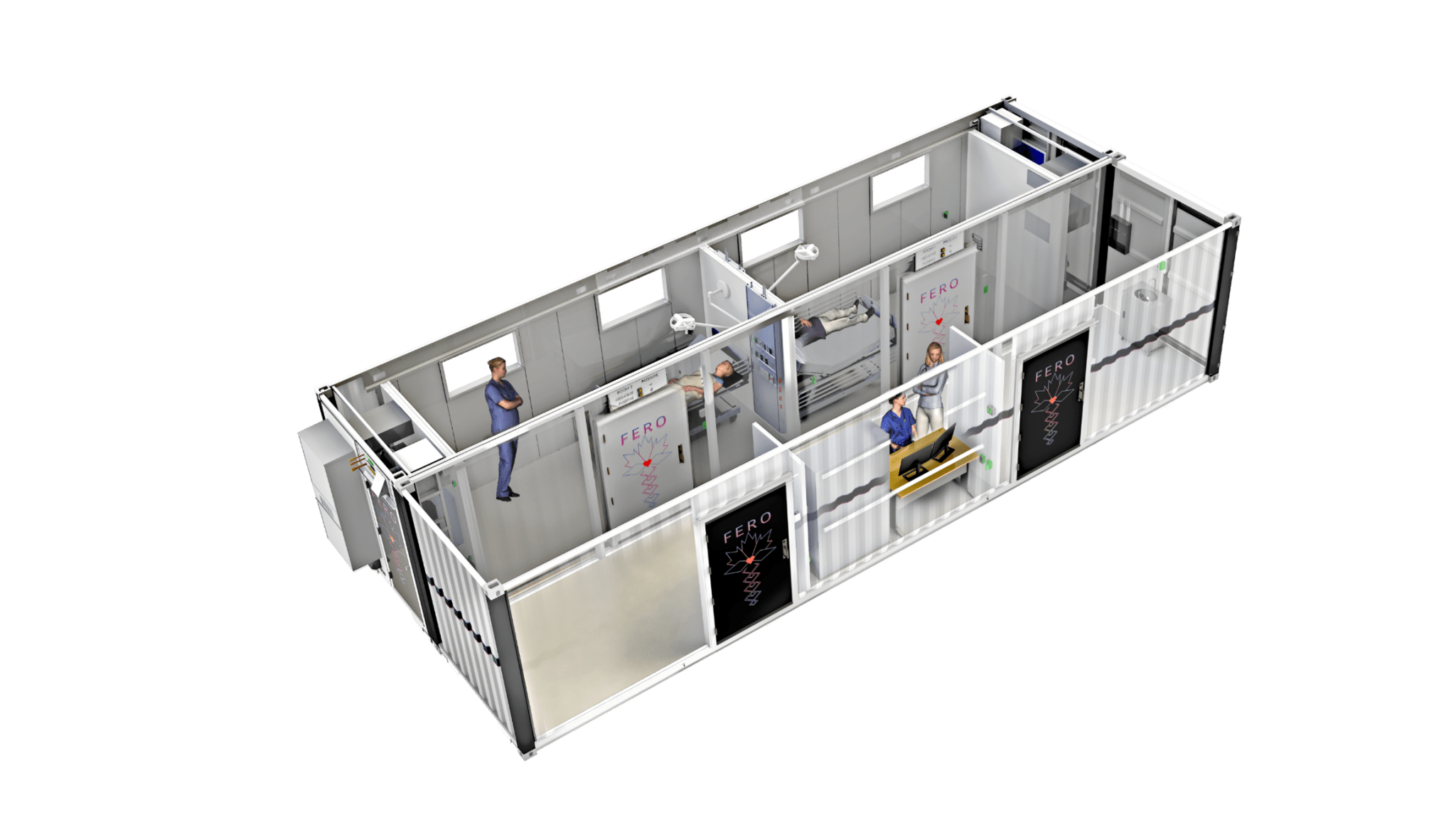 Dr. Laura Hawryluck, corporate chair of UHN’s acute resuscitation committee and physician leader of the critical care response team at Toronto Western Hospital, was involved in the development and testing of the rooms.

Hawryluck says the rooms could help with one of the most difficult parts of being an ICU physician — triaging resources — by providing space when there are bed shortages.

She says one of the most important aspects of the rooms is their ability to maintain positive, neutral, or negative pressure, depending on the needs of the patient. Negative pressure rooms are used in infection control, by bringing airflow into the room and filtering exiting air. Positive pressure can be used for patients with immune- compromised systems, so only filtered air enters the room.

Hawryluck says the fact that hospitals only have a limited number of negative pressure rooms makes it “an innovation that we’ve never had.”

“I saw the potential of this and really how it could be a game-changer for critical care,” she says. “It’s one of the most exciting changes we’ve seen in [ICU, OR] healthcare ... in a long time.”

The UHN team involved in the project volunteered to do a simulation, in order to test the functionality of the rooms.

The scenario Hawryluck and the rest of the team carried out was a man with COVID-19, who is initially stable but quickly deteriorates. The team responds using the equipment in the portable ICU room.

The results were positive.

“The team was like, ‘You know what, we actually want to try this with real people. We think this is exciting, we can do this,’” she says. “Yes, it means adapting, but the fact that people could see right from the start that they could adapt, I think is a huge compliment to what we’ve tried to build."

The simulation resulted in the UHN team making a few small recommendations, she says, including placing an intercom in the rooms for medical staff to communicate.

Fiorellino says the testing phase has concluded and the company is now waiting for government, hospital, or stakeholder support in order to start deploying the containers. The company has also filed for a patent.