The best of the best images of Canadian wildlife from the annual competition hosted by Canadian Geographic in partnership with the Canadian Museum of Nature
By Alexandra Pope
March 25, 2020

A Canada lynx kitten stares intently over the top of a snowbank, surveying its surroundings. A northern pygmy-owl seems to frown amid a whirl of snowflakes. An underwater pillar decorated with sea stars, anemones and urchins rises toward the dim glow of the surface. Canada’s biodiversity is breathtaking in its beauty and variety, but it’s also vulnerable to climate change and the encroachment of human activities on critical habitat. The 20 winning photos of Canadian Geographic’s 2019 Canadian Wildlife Photography of the Year Competition, hosted in partnership with the Canadian Museum of Nature, offer us an intimate glimpse at the often secretive lives of animals, and serve as a reminder that nature in all its forms is worth protecting. Scroll down to see some of the best images selected from among more than 5,400 entries by our panel of judges: Brittany Crossman, Daisy Gilardini, Dax Justin, Megan Lorenz*, Ben Powless, and Ryan Tidman.

Visit the competition website to view the runners-up and honourable mentions!

*Megan Lorenz judged the Birds category only; she had no input into the selection of her own photo as a winner in the Animals in Action category, which was judged by Daisy Gilardini. 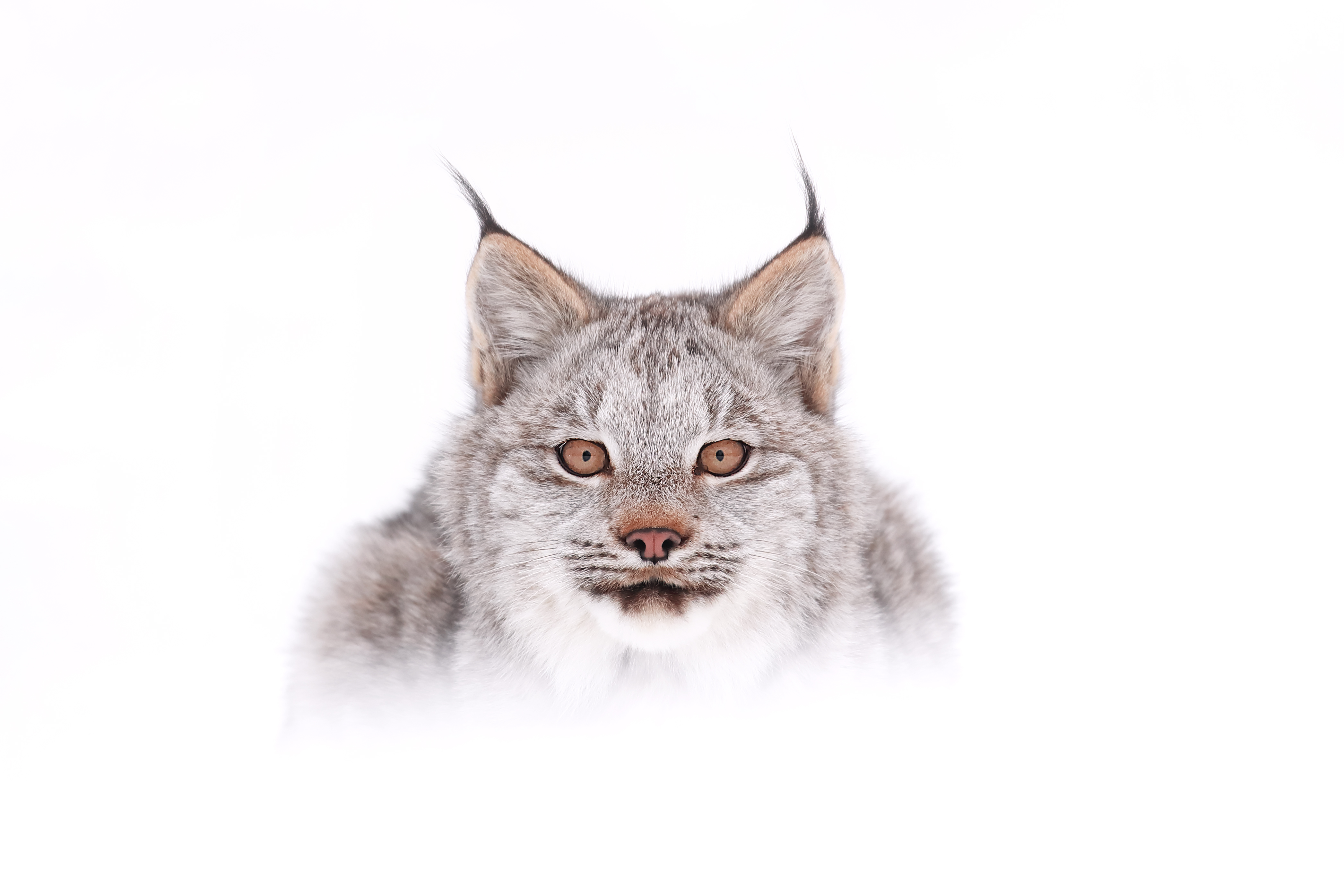 A Canada lynx kitten shelters from the winter wind in North Bay, Ont. Photographer Megan Lorenz says, “I’ve been able to spend a great deal of time with a wild female Canada lynx whose territory has included a friend’s property for the last two winters. This winter was even more special because she brought her two kittens with her. This kitten would have been approximately eight months old; they usually leave their mother at 10 months when the breeding season starts again. The young lynx will often stay together for a while once they’ve left their mom.”

What judge Daisy Gilardini said: “Even if there is no visual ‘action,’ in this shot, the tension is palpable. It looks like the lynx is about to pounce. I love the intensity of the look, and how the photographer used a low perspective and the snow in front of the lynx. Perfectly sharp and framed.” 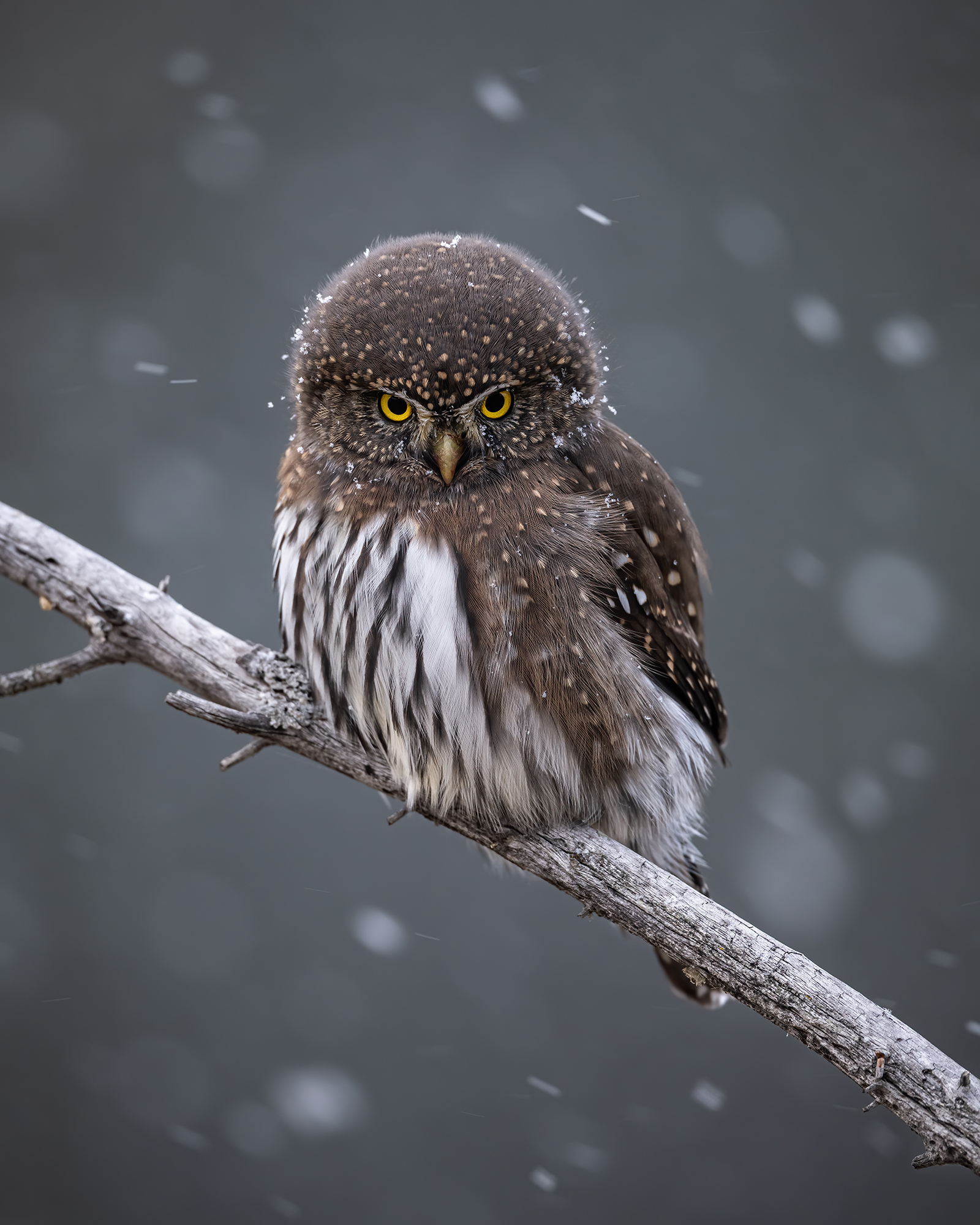 A northern pygmy-owl appears unimpressed with the weather near Fort Steele in the East Kootenays region of B.C. Photographer Randy Tremblay says, “I had photographed this particular owl a few times at this location and on this day I was driving down the road during a late afternoon snow storm when I spotted the owl perched on one of its favourite stumps. I moved out into the field to watch this amazing little hunter braving the storm, during which it provided me a wealth of amazing photos in the very cold, moody atmosphere.”

What judge Megan Lorenz said: “The owl may not be impressed, but I am! The owl is sharp, showing wonderful detail in the feathers and eyes, and the soft background makes the subject stand out. The downward gaze draws me into the photo; these owls may be small but they mean business!” 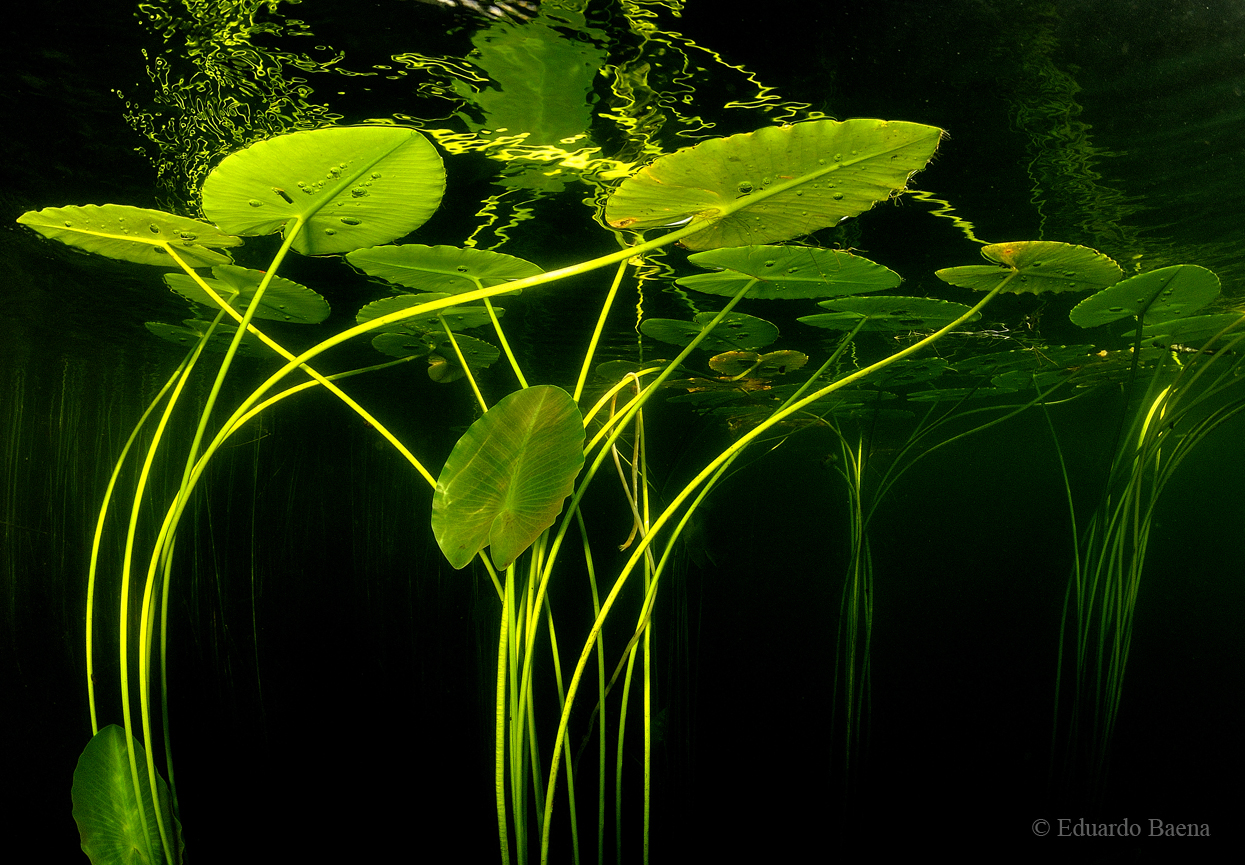 Water lily leaves, seen from below, soak up the sunlight on the surface of Brohm Lake, B.C. The aquatic plants of the family Nymphaeaceae are found in all the world’s temperate and tropical zones. Their broad leaves and long, thick stems provide shelter for frogs and fish, while their sweet-smelling flowers, which come in a range of colours, attract pollinators.

What judge Ryan Tidman said: “This is a relatively common underwater shot, but very technical. The exposure is great.” 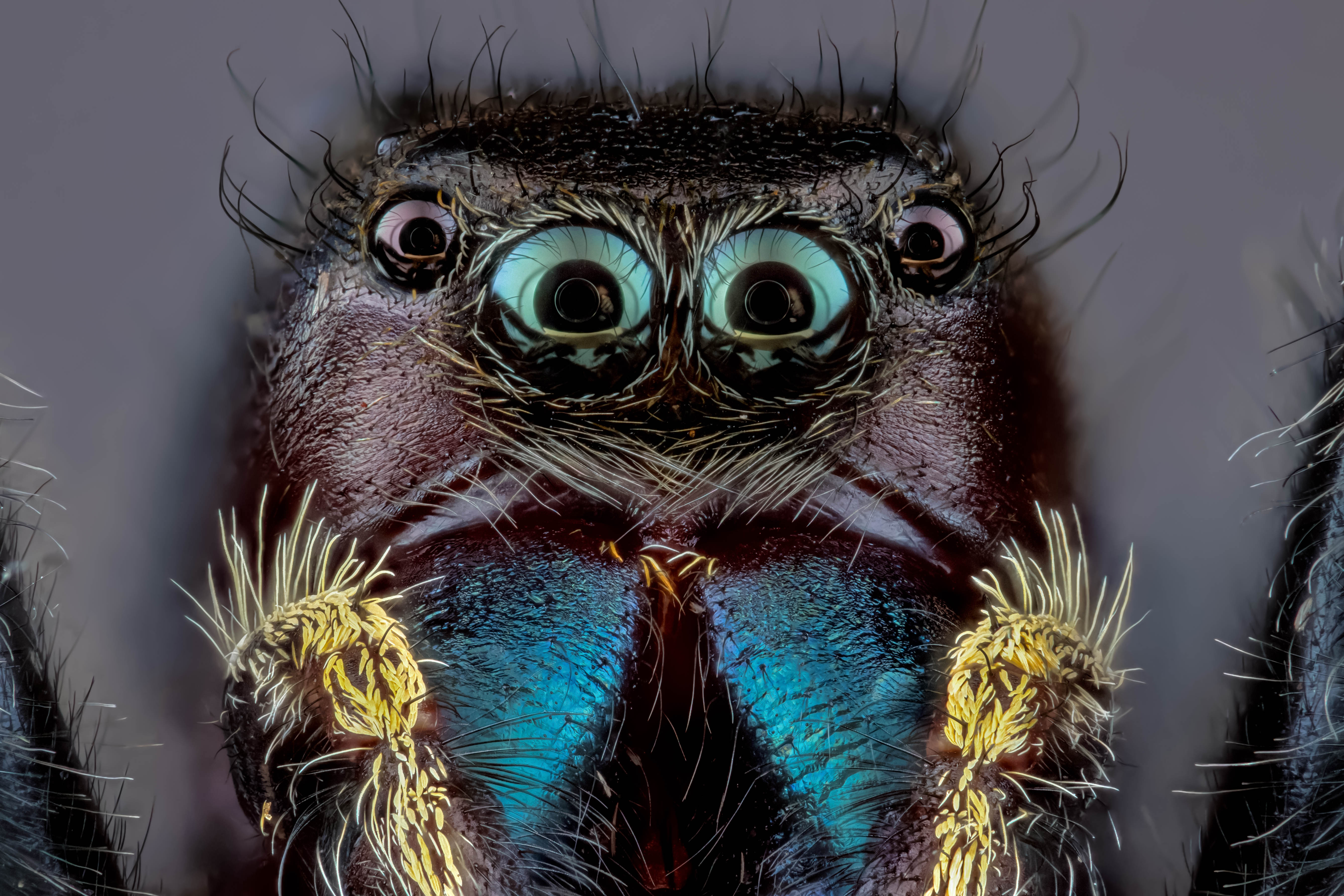 A macro shot reveals the intense four-eyed stare of phidippus audax, a common North American jumping spider that the photographer found in his bathtub in Oshawa, Ont. Its scientific name comes from the Latin meaning “daring, audacious.”

What judge Ben Powless said: “I love the crispness of the eyes and individual hairs. This is one of those instances where macrophotography really opens up a new perspective, which I appreciate. The colours also really pop — another surprising detail. I like how the camera and photographer is just barely visible in the spider's eyes.” 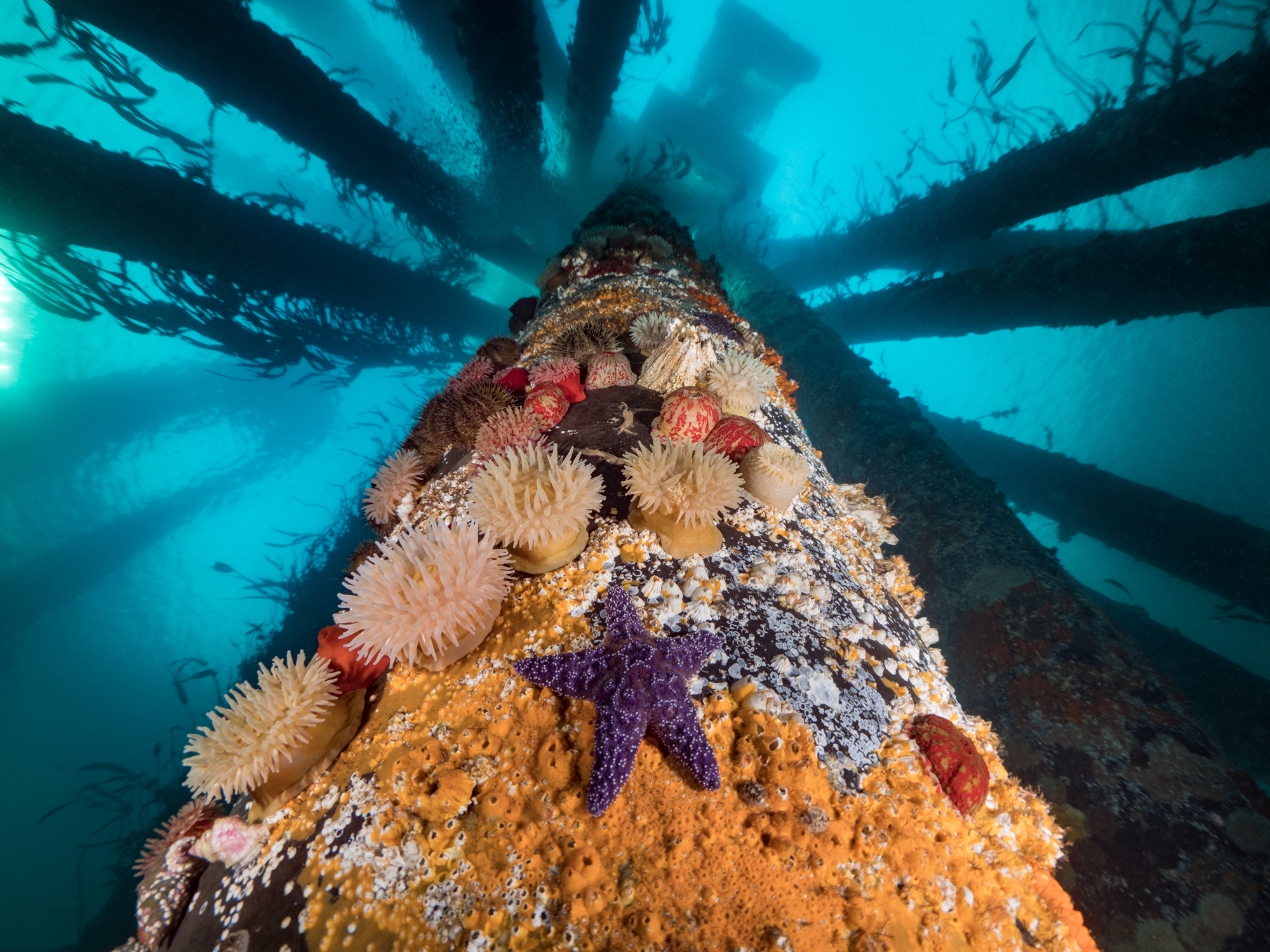 The Campbell River Cruise Ship Terminal on Vancouver Island has gone unused for years; in the meantime, a dazzling array of marine life has colonized the pillars of its piers. Photographer Maxwel Hohn explains, “Discovery Passage is known for some of the strongest tides in the world, which bring nutrient-rich water to the diverse marine species that thrive in this area. The terminal has become a metropolis for a brilliant display of life.”

What judge Brittany Crossman said: “I love everything about this photograph: the angle, composition, colours, and the scene. Invertebrates are often overlooked; therefore, I like how they are the focus of this image, and not mammals or birds. These species are commonly seen in urban areas around marinas and wharves. I really enjoy seeing someone thinking outside the box, and highlighting urban wildlife that is under the water, out of sight for most.”

Winner | Young Photographers (17 and under) 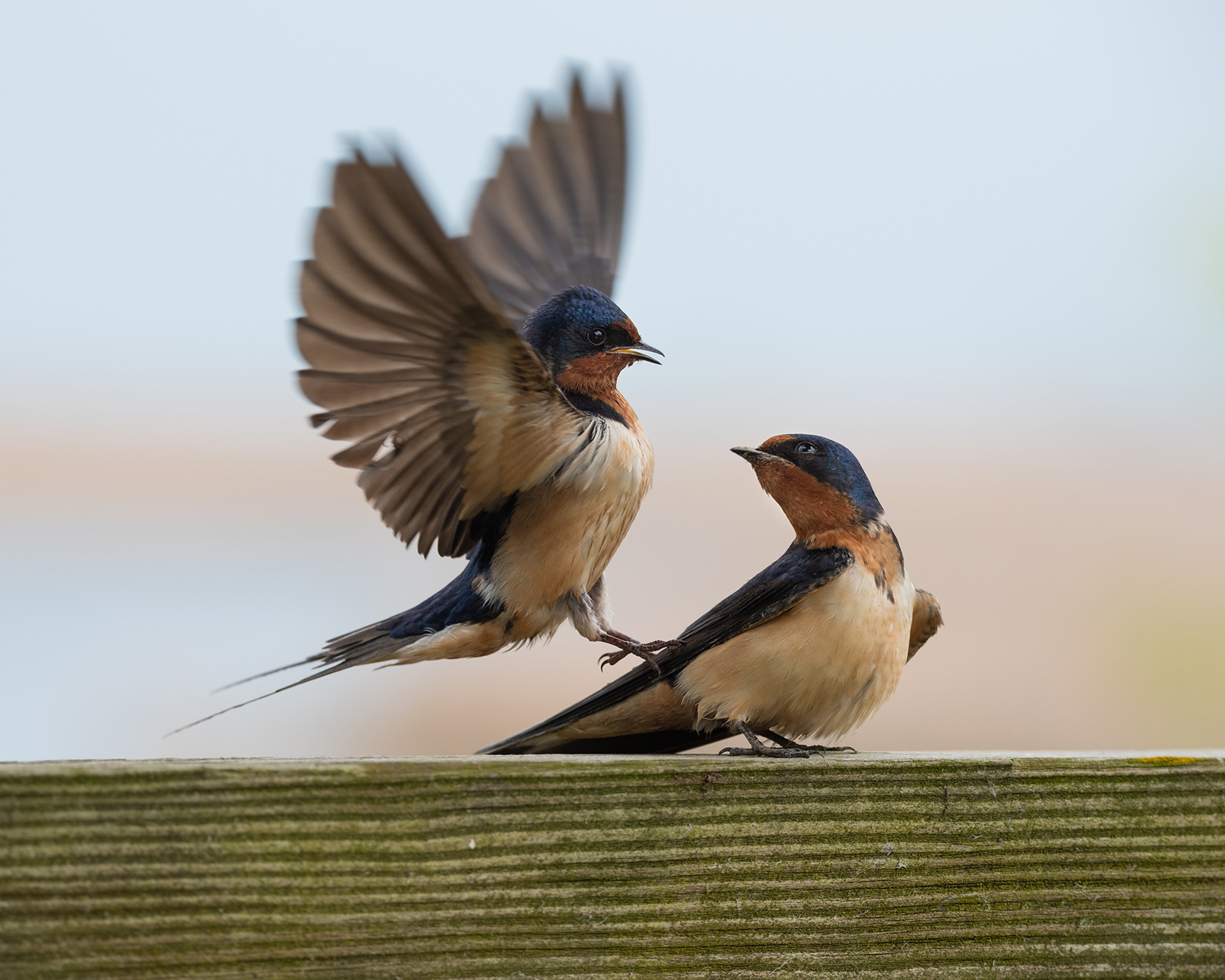 Two male barn swallows squabble on the Marsh Boardwalk in Point Pelee National Park, Ont. As their name suggests, barn swallows like to nest in barns and stables, but also under bridges and wharves. During breeding season, both swallow parents will defend the nest, but the males are particularly aggressive and territorial.

What judge Dax Justin said: “What an amazing moment in time to capture. I love photos that profile interactions between wildlife and this is an exquisite capture.”

Canadian Geographic gratefully acknowledges the support of our sponsors: the Canadian Museum of Nature, Vistek and Nikon.