A celebration of the Indigenous Peoples Atlas of Canada | Canadian Geographic

The first-of-its-kind educational resource aims to share the stories and cultures of Indigenous peoples with Canadians and the world
By Alexandra Pope
June 22, 2018

The Hon. Nellie Kusugak, Commissioner of Nunavut, grinned as she knelt down on The Royal Canadian Geographical Society’s Indigenous Peoples Atlas of Canada Giant Floor Map and pointed to the hamlet of Arviat.

As a child in a residential school, Kusugak never heard her language spoken, nor could she find her birthplace, then known as Eskimo Point, marked on maps of Canada and the world.

“It made you wonder: do we even matter?” she said.

Kusugak was one of nearly 200 people who gathered at Canada’s Centre for Geography and Exploration in Ottawa Thursday evening — National Indigenous Peoples Day — to celebrate the completion of this groundbreaking educational resource, which was produced by the RCGS with the support of Heritage Canada and in partnership with the National Centre for Truth and Reconciliation, the Assembly of First Nations, the Métis National Council, Inuit Tapiriit Kanatami, and Indspire.

“We’ve come a long, long way,” Kusugak said. “We have so many opportunities as Indigenous Peoples today that I did not have, and I’m so excited for my grandchildren, my great-grandchildren.” 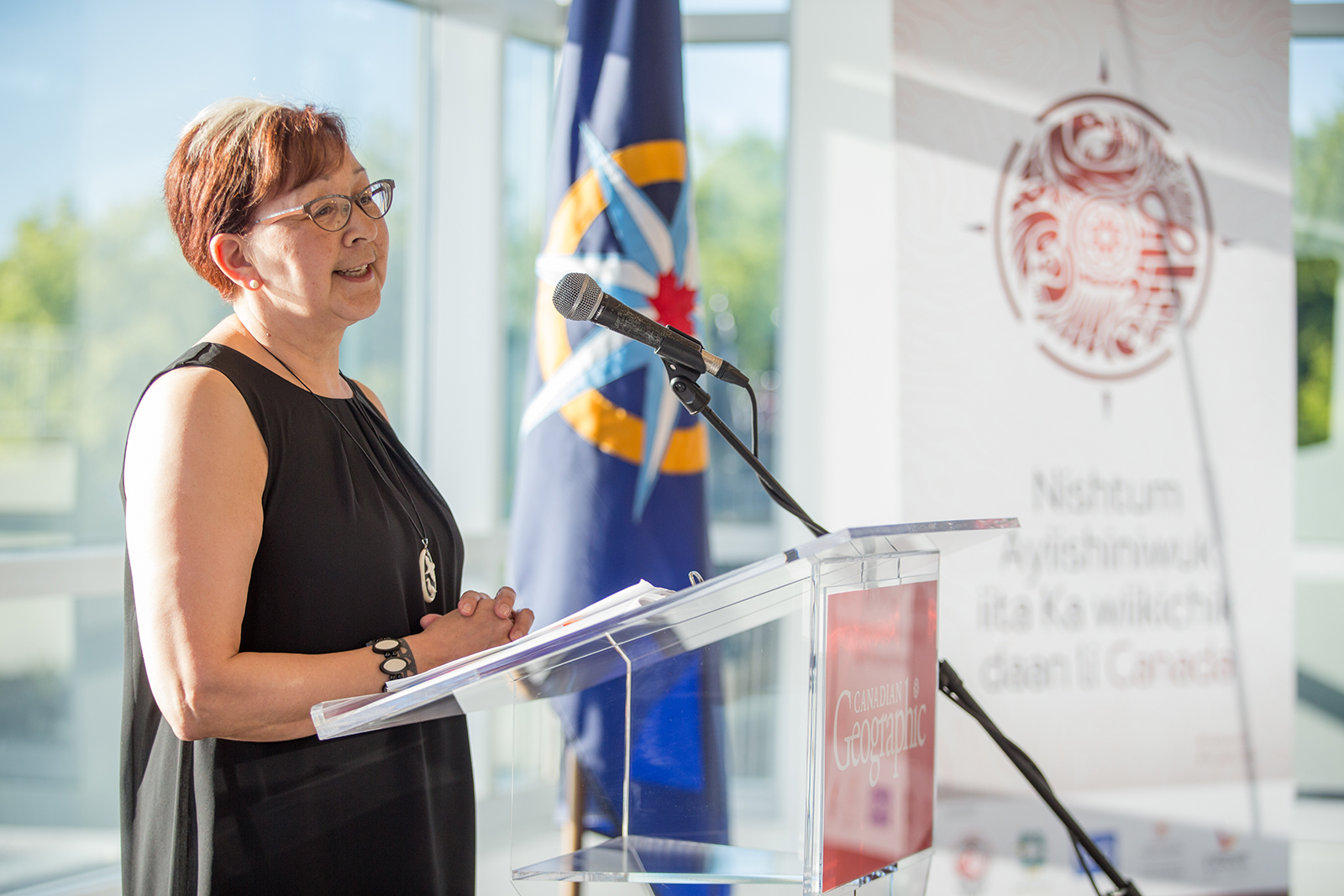 Kusugak’s optimism was echoed by each of the partners, who spoke in turn surrounded by a panoramic view of the Ottawa River on the traditional unceded territory of the Algonquin people.

Natan Obed, president of ITK, told a story about a moment he had shared with an Inuk elder in Torngat Mountains National Park. “He looked up [at Saglek Fiord] and said, ‘My footprints are all over these hills.’ That is just a beautiful expression to describe the connection that we as Inuit have with our places,” he said. “This is why we need atlases: to describe our place in this country so that we can share with our children the richness of our culture.”

Oliver Boulette, who spoke on behalf of Métis Nation president Clem Chartier and also played the fiddle as guests mingled in the lobby, reflected on the importance of taking time to celebrate shared success. “This is a great gift for us to be able to tell Canada’s story,” he said.

The Hon. Melanie Joly, Minister of Canadian Heritage, said when the IPAC project was announced one year ago to the day, it signalled the federal government’s readiness to turn apology into action and renew its relationship with Indigenous Peoples in Canada. The completion of the Atlas is “another milestone in our journey of reconciliation,” she said. “For too long, Indigenous peoples were denied their right to their history and their culture. This [Atlas] gives a rightful place to the stories and perspectives of the peoples who have cared for and helped shape this land.” 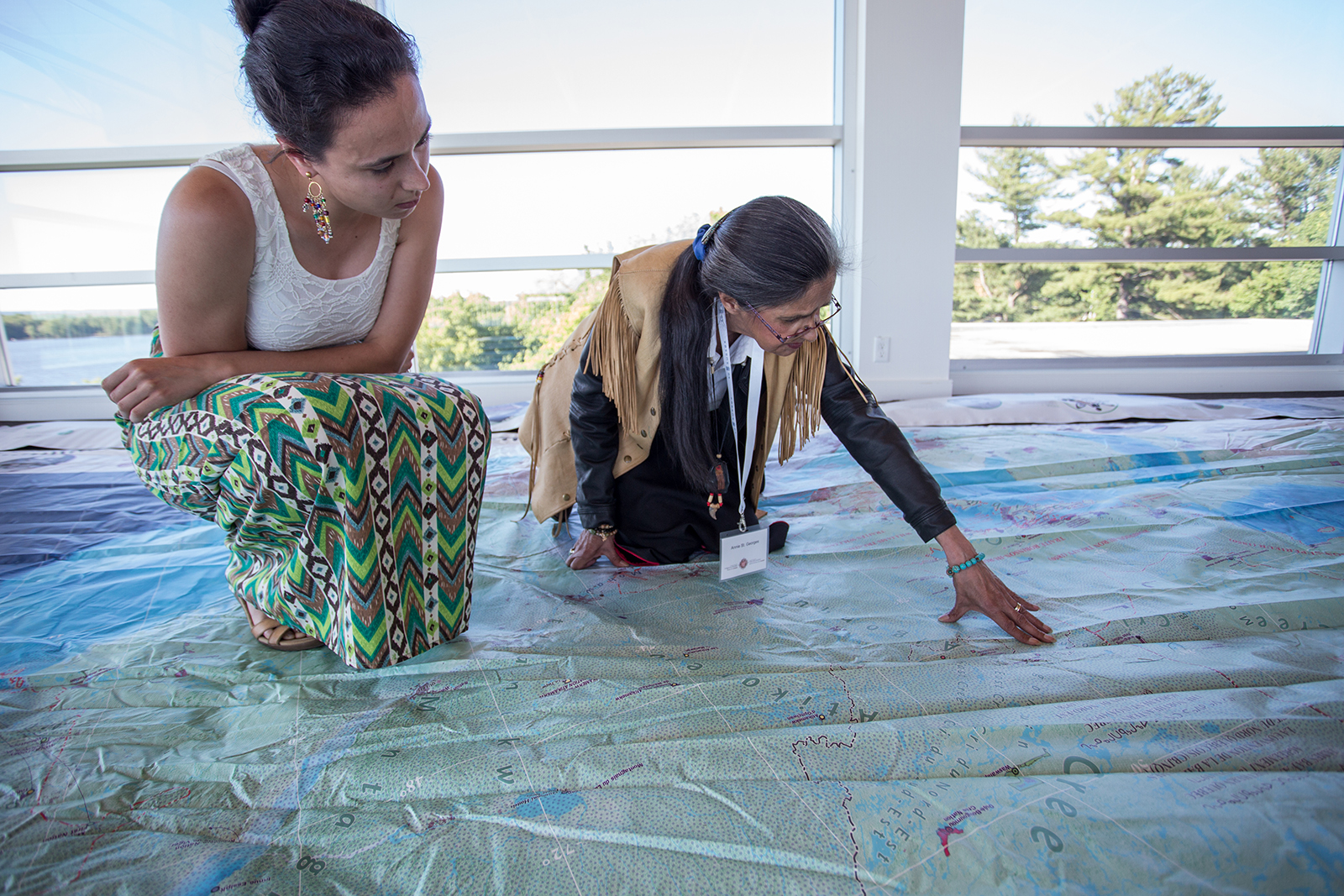 John Geiger, CEO of the RCGS, thanked the many contributors to the Atlas, who included editor Ossie Michelin, writers Darren Prefontaine and Michael Kusugak, photographer Nadya Kwandibens, educators Charlene Bearhead, Ali Darnay, Gail Stromquist and Sarah Gazan, cartographer Chris Brackley and many others. Their combined efforts created a resource that is truly national in scope, and an example to Canadians and the world of what is possible with collaboration.

“The learnings from this Atlas will help ensure that Indigenous voices in every part of this country and throughout the world are heard and understood,” said Geiger.

And in a move that will ensure the Atlas and related educational materials are made available to the widest possible audience, the award-winning Kids Can Press has signed on as the sales and distribution partner for the project.

Ry Moran, director of the National Centre for Truth and Reconciliation, concluded the formal portion of the evening by acknowledging the courage and determination of residential school survivors and their descendents, who fought for decades to have their truth heard and who are still fighting to overcome the harmful legacies of colonialism.

“The residential schools did intend to wipe out this information from this country,” he said. “This synthesis of knowledge contained within a relatively small book has taken massive, longstanding collective effort on the part of Indigenous Peoples coast to coast to coast.”

Moran encouraged those gathered to think about how they will continue to support Indigenous Peoples and reinvest in cultural preservation.

“Let’s celebrate the Canada we’re going to build,” he said. “We haven’t gotten there yet, but we are trying, and we are going to make this country better.”